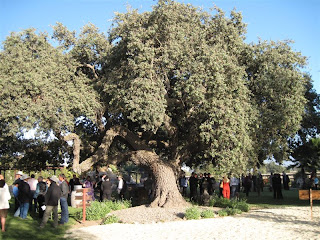 This oak tree is in Los Olivos, California, how old it is I do not know.
The occasion did not allow my climbing up, but that's what this tree said to me, "Climb on up and spend the day...read a book, dangle your feet, watch the birds, follow the clouds...dream a dream." 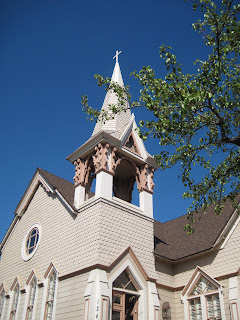 Taking a morning walk in Arroyo Grande, the steeple caught my eye and said,
"Look up..."
Such a flock... 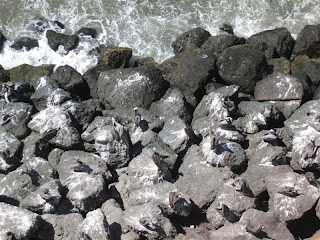 Looking  down ...The birds are not always on wing. Here they rest on rocks at  the water's edge at Pismo beach. 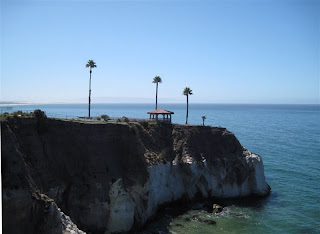 Remind me to keep a fresh outlook...
three palm trees and the distant pier...the same ocean that I see every day and yet... 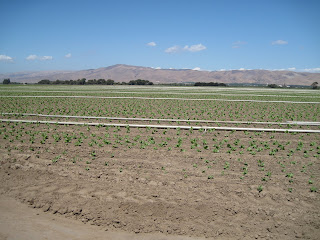 passing the crops on the west side of Salinas on the way home... the whiff of chemicals reminds me to eat organic... 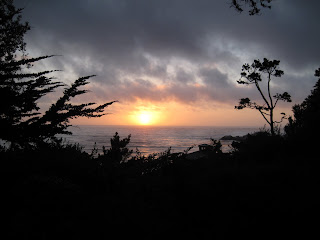 I am grateful to be home again and reminded to take nothing for granted. 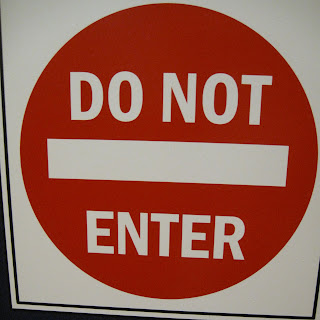 Sunday morning was another foggy morning in August. It isn't what is typically expected in a California August, and while morning fog is not terribly unusual, all day fog has  been a rather reliable visitor in Carmel and other parts of the California coastline this year.

I know there are floods in Pakistan and Iowa...I see the maps depicting sweltering heat over much of the United States, so I offer my pictures and my foggy musings knowing that whether or not I like the weather, I am very fortunate. Maybe some of my pictures will even cool a few hot folks down a bit. 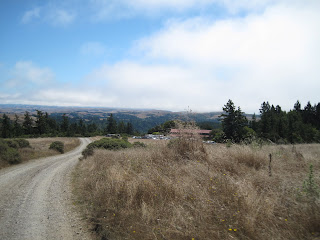 On  Saturday we drove up north of the San Francisco Bay to a wedding in the Sonoma County coastal  hills at a ranch called  Ocean Song.  There was sun for a time that afternoon and the recent rarity of sunny warmth made it very welcome.  The sun disappeared quickly though, and the bone warming temperatures dropped rapidly. 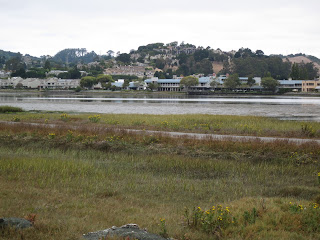 Traveling home on Saturday night, we slept in on the outskirts of the town of Mill Valley just north of the Golden Gate Bridge. Although our location on a clear morning would have yielded a perfect view of the mountain of my youth, the mountain I carry with me in my memories and dreams, there was not a glimpse of her to be had. Not only were her lovely peaks hidden, the flowing lines of the sleeping princess, even the base of Mt. Tam was shrouded. The hotel had lovely enlarged photographs of the local environs. Our room had a night image with the moon captured full and bright over the silhouette of Mount Tamalpais.  I couldn't see the mountain, but I knew it was there.

In the morning's chill and mists we decided we'd walk along the bay in the town of Sausalito. Under gray skies on apparently gray waters, sail boats were already dotting the bay. As we began our stroll, we could only just make out the shapes of Alcatraz Island and the Francisco Bay Bridge through the curtains of fog. 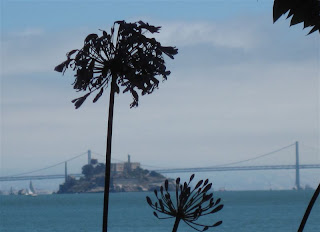 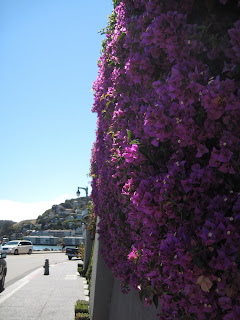 It wasn't going to be an all day fog day...the fog was melting away, burning off, as it is often described.  Blue sky appeared and light made colors once again apparent and abundant. 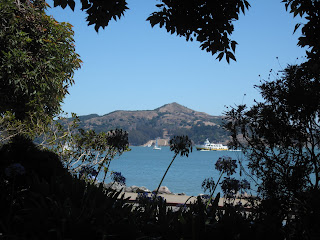 We peeled off our jackets and we even took shelter on a bench  to drink coffee in the welcome shade of a blooming red gum eucalyptus tree where we could  watch the boats pass Angel Island in the now sunny blue. What a fickle thing our preferences can be. 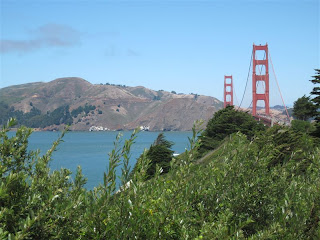 We stopped just south of the The Golden Gate Bridge  to have one more peek at the blue sky.  As we entered the city we were back in the fog.
And yes....we woke this morning to another Carmel foggy morning but I know there is sun out there...and I'll be watching for it to break through, any day now.
~~~
Posted by Jeannette at 6:39 PM 2 comments:

Beauty in compost makings...even the clippings delight me...

Dead heading flowers I looked down in my bucket 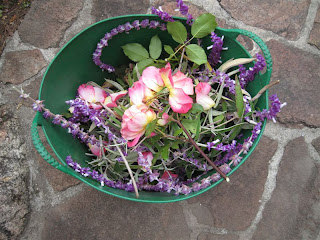 and was stunned  at their beauty.
Posted by Jeannette at 10:17 PM 2 comments: 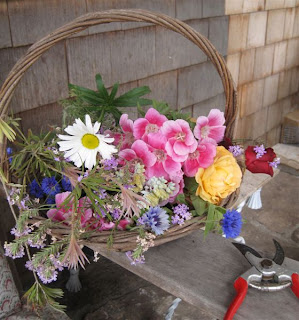 Me and my helper ( that is to say properly, My helper and I ) 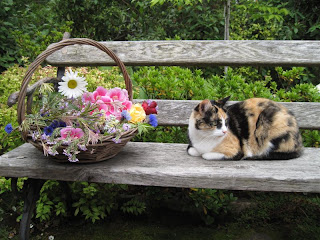 picked a few flowers to arrange here and there... 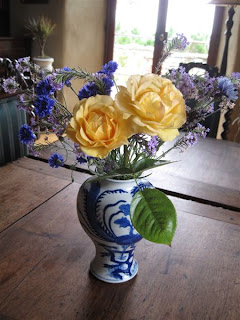 Yellow and blue strike a chord...
the roses are quite opened up, but we can't all be new buds...can we? 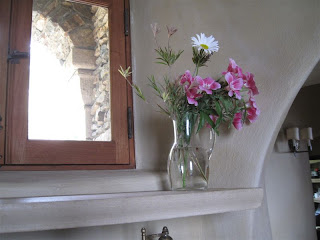 Kitchen casual...I put some lemon verbena in these bouquets and they smell lovely. 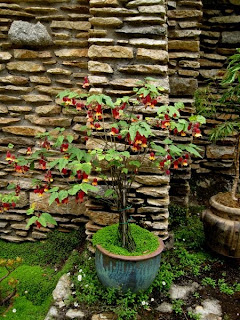 And back outside...the blooming maple
finally has more blooms than nibblers.
Posted by Jeannette at 4:19 PM 4 comments: