Just begin...
as the month of August ends...
Do you ever read the last page of a book and then rush back to reread the opening lines?

On my way in for an ultra sound of an elbow the other day,  I was so struck with presence of the building I stopped and took a number of pictures.   The entrance grounds, the building, the blue sky, the oak boughs above the path are a bit of medicine all in themselves. 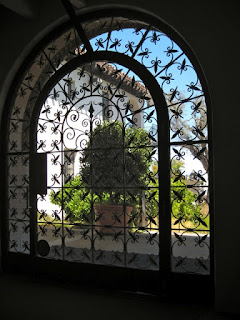 This photo was taken from my seat in the waiting area.  I saw a photo of  Clint Eastwood  unveiling a plaque and later read that this building also houses the Clint Eastwood Youth Program, for youth needing to recover from substance abuse.  I saw Clint last night,  not here in town, but on television as he spoke at the Republican National Convention using something reminiscent of the psychotherapeutic empty chair gestalt method. The theory emphasizes that in order to get  fully into the experiential present moment, so you can go forward in life, you may have to extricate yourself from  webs of relationships that have formed your past, without the help of those significant others, and hence you address an empty chair.  Recovery is a big theme in our time.

Also hanging on the walls of  Hartnell Professional Center,  are a number of  large oil paintings,  gifts from local estates, of the colorful early settlers of old Monterey.  Monterey was the first capital of California, from 1776 to 1822  under Spain and then when Mexico achieved independence from Spain, Monterey was the Mexican capital of California.  Spain had not allowed foreign traders in California, but Mexico opened the ports for trade.  It was in the same year, 1822, that the namesake for this building, William Hartnell  arrived and began his first California ventures in the cattle business and later he began a school for  boys.  You can't live in this area and  not know his name as there is a street, a park and schools named after him, but his story is not fully available and questions of accuracy abound.  I suppose that isn't unusual, is it?   Well, Monterey was not chosen as the capitol when statehood arrived for California in 1849...but it is still a capital little city.

But back to August while it is still the present, for it is about to become history itself.  August gave us a few, and some of our first, sunny days in a good long time. As I mentioned fog on my one and lonely several July posts,  I feel as if I must really share some of the August glory.  Fog is not a hardship like so many of the extremes many regions face, but when it lifts it certainly lifts more than itself. 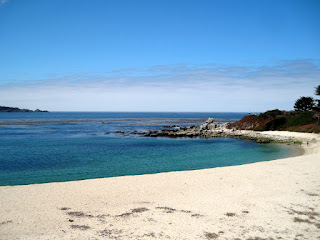 From Scenic Road in Carmel ...those rocks on the left are the tip of Point Lobos. 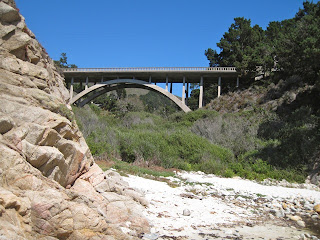 Last weekend we climbed down
through the creek... 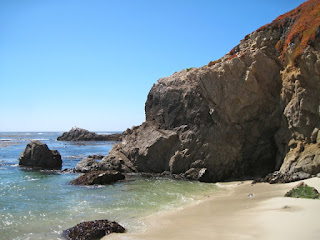 to a neighboring beach were there was not even a footprint in the sand. 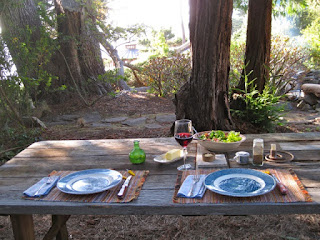 And later back at home, Mark set the table under the redwoods and cooked our dinner on a fire...now that felt like a summer day.

August 2012...people came and went...one of the guests who left early bequeathed to us tickets to an event we have never had on our personal horizon, the 62nd Pebble Beach Concours d'Elegance. While we have enjoyed the free parade of antique cars down the Costal Route, we had never been to see the competition exhibit on the 18th fairway of the golf course as automobiles have never been an interest or hobby for either of us.  I learned that Monterey Peninsula is still an open port...by inviting car enthusiasts from all over the world the Concours creates a source of support for many people in need...Prior to this year, donations to charitable organizations exceed 15 million dollars.   As we wandered around the relics of years past, we were also aware of  how many jobs this expensive event creates.   I took a lot of pictures and post a few here for your entertainment. 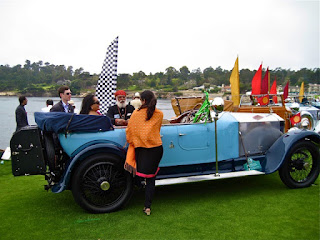 The cars from India, the "Maharaja cars" were a big attraction and were given the honored spot of the waterside edge of the fairway.  This  award winning 1924 Rolls-Royce  belongs to the Maharana Arvind Singh Mewar of the Palace in Udaipur. 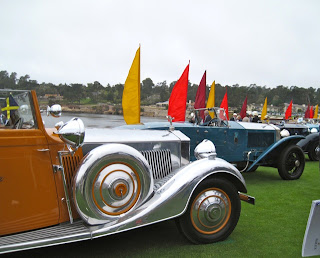 The local Carmel Pinecone did a story, "Indian royalty make grand impression at Concours" that unearthed interesting details about the1932 Rolls known as the Star of India. 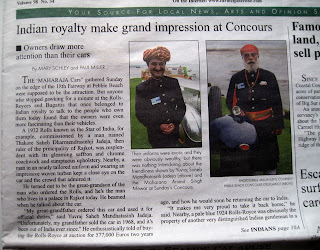 The grandson of the original owner has repurchased the car after its  44 year exile in Europe and will now return it to India as a present to his father on the occasion of his 75th birthday. 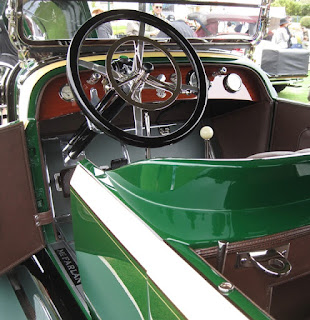 I liked this green car... 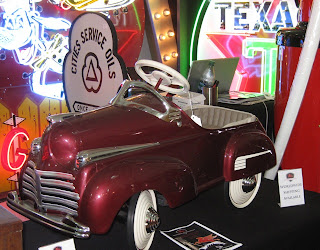 but in one of the merchandise halls I saw the car that is probably closest to my speed.

I have seen signs lately urging people to "Please Drive as if Your Children Live Here" which strikes me as a good admonition, not only for driving with such awareness, but to live with an awareness of the children of the future.
History is in the making...and
September will be here tomorrow.