In the last week of August,  the pears on the tree sing "carpe diem."  I have read that a more literal  translation of  "carpe" than the imperative  "to seize" is "to pluck."
"Pluck the day"... it is ripe.

Tomatoes ripening on the vine is something I had nearly forgotten about the last seven summers on the coast.  We had a few red tomatoes in time for Christmas in Carmel but Sebastopol sunshine has brought forth an abundance. The strawberries have been providing
a daily treasure hunt opportunity. The Golden Delicious tree was cut in half last year by a neighbor's falling  Incense Cedar tree.  The clean up crew phoned us down in Carmel and wanted to cut the  remaining half apple tree down.  I'm so glad I didn't take their advice.  Our half-a-tree is bearing beautiful apples who sing a saucier song...and sometimes call for pie. 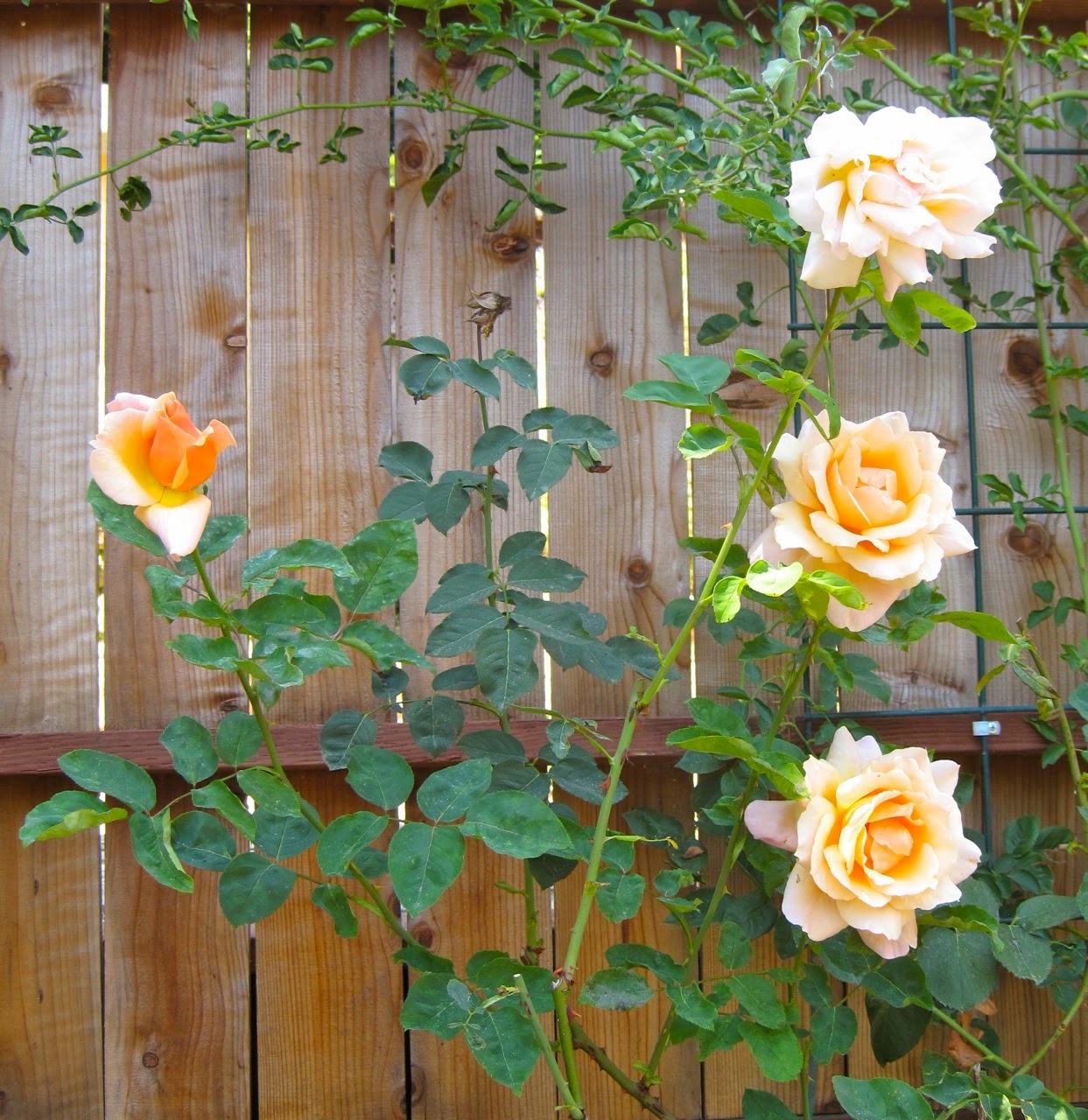 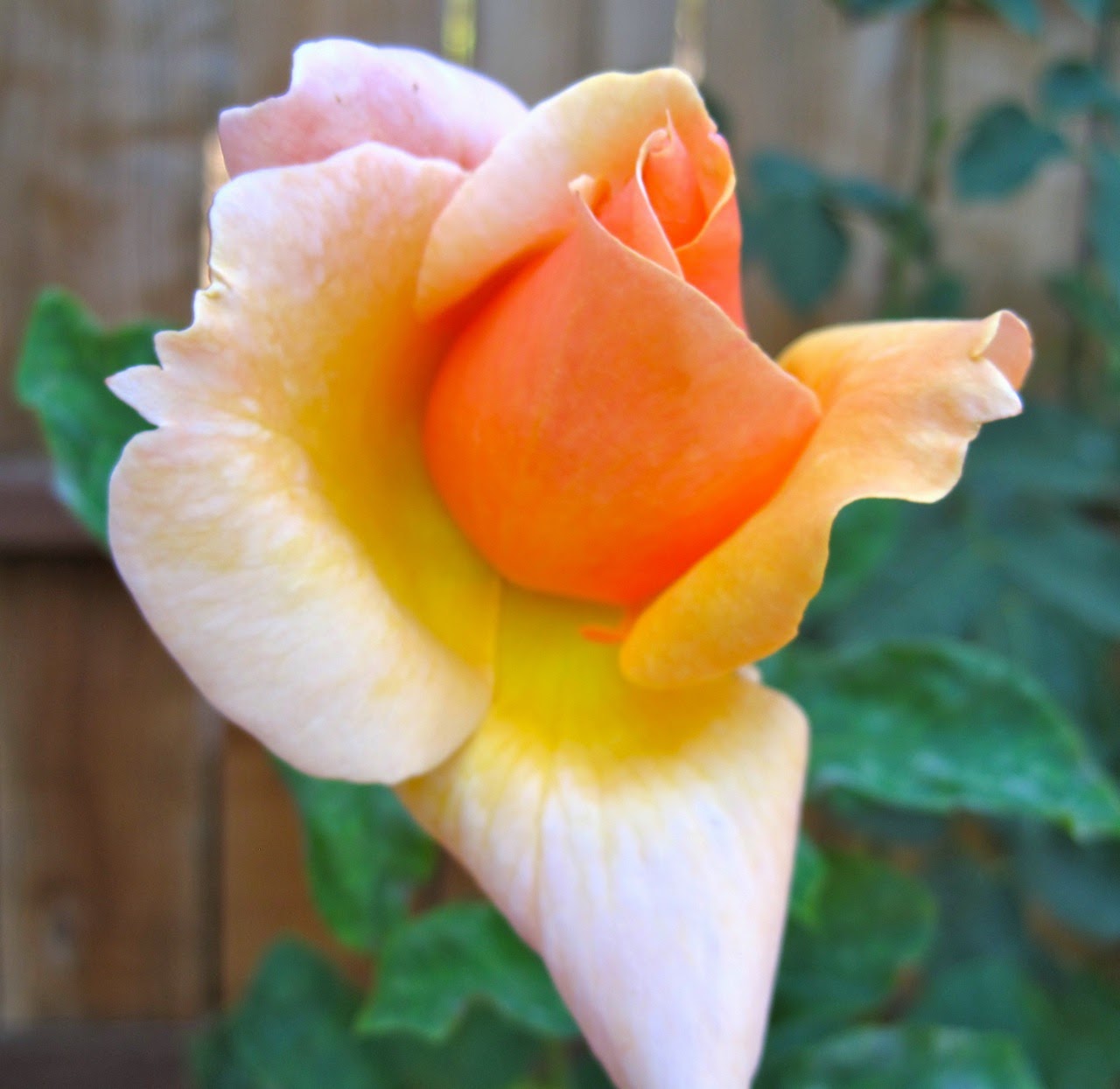 and flowers...the roses are still blooming... 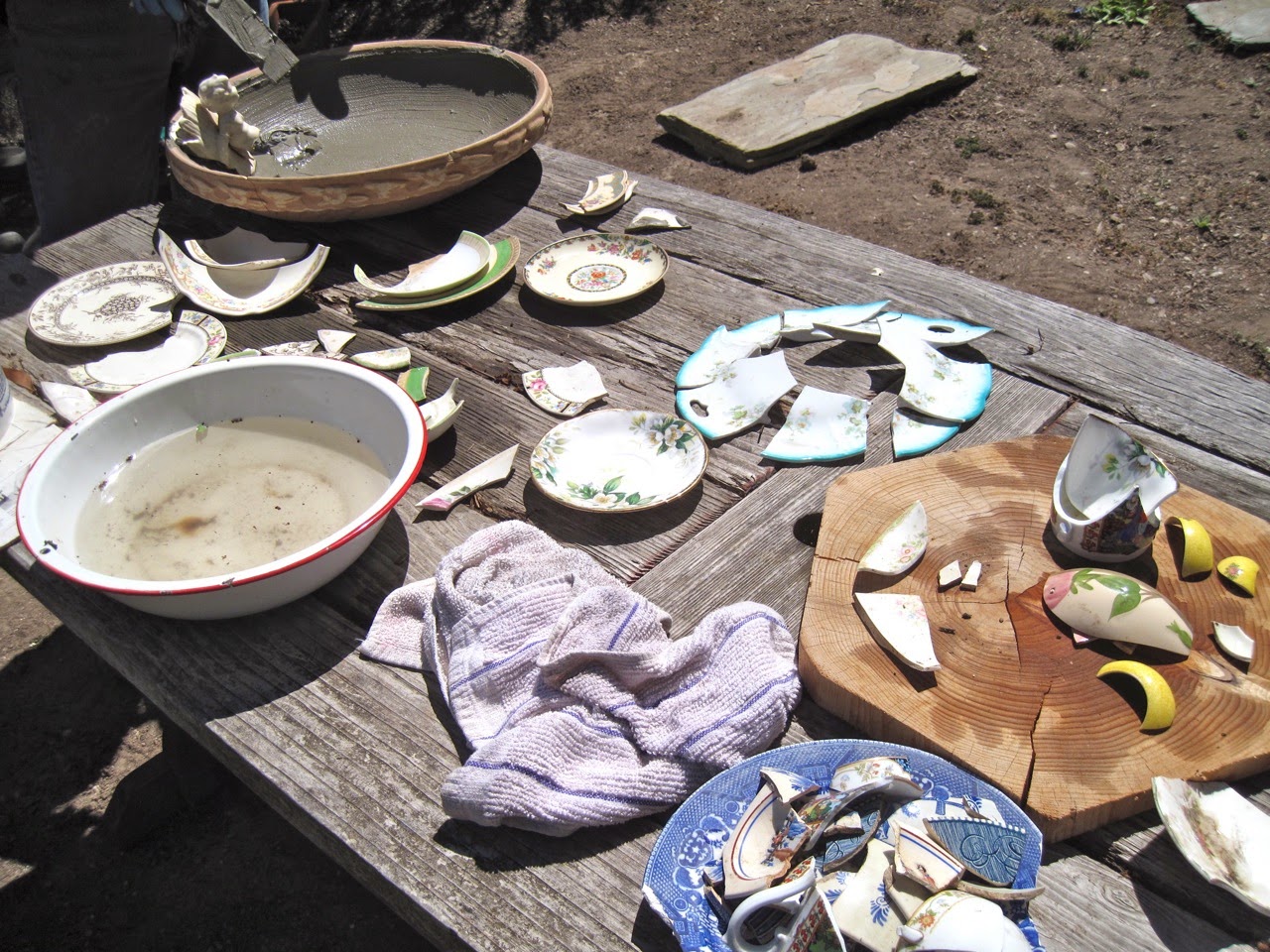 And all that broken pottery I saved in Mark's shop...we hauled out the box and we've begun to fix a bird bath that was broken in our absence.  This is a very experimental repair and as it's for the birds I'm hoping they they won't mind if it's more goofy than artistic.

May we pluck the day and give thanks, while it still yet August. 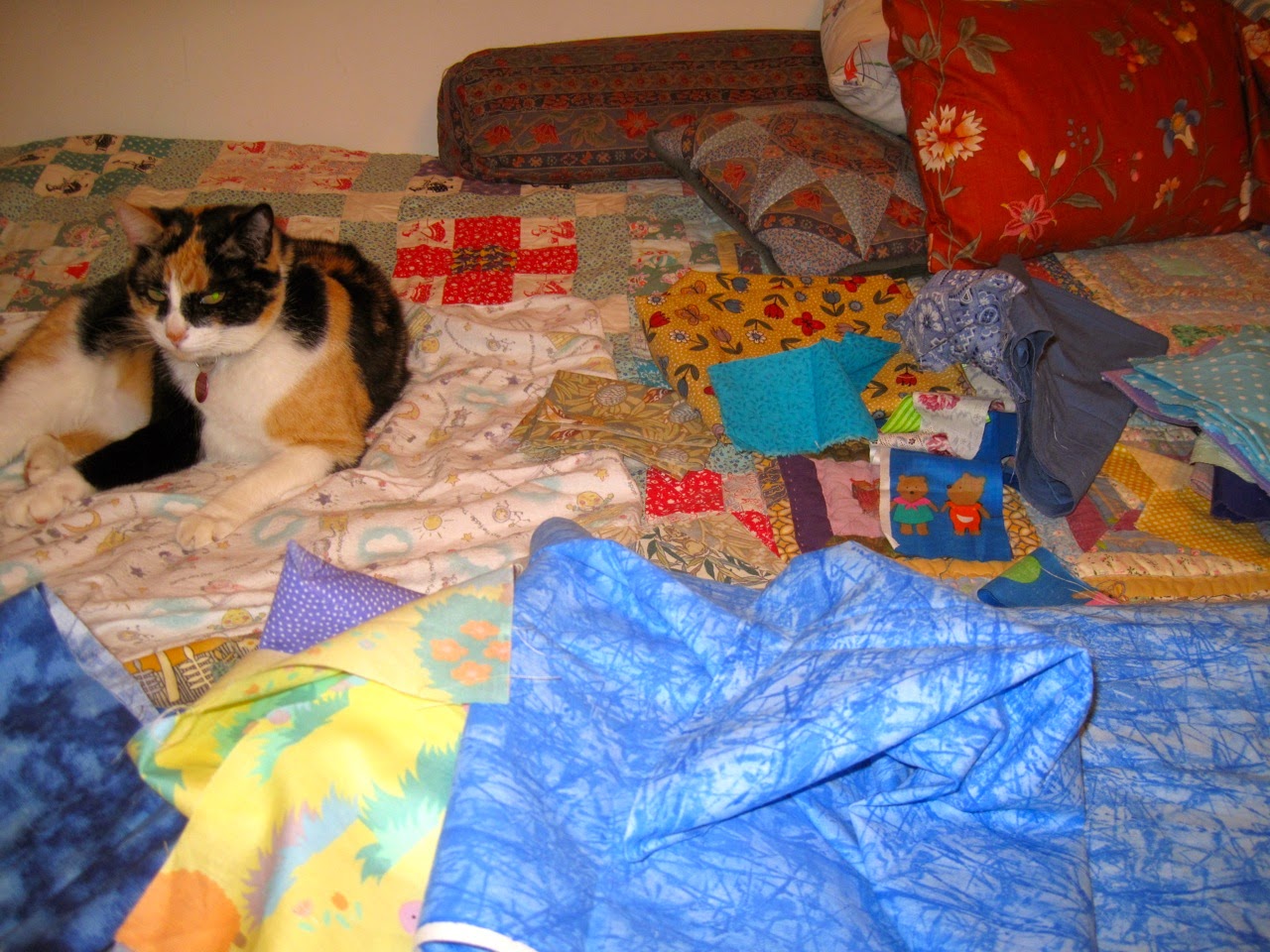 Sometimes I have to make quite a mess to get the creative juices flowing.  Phoebe the cat wanted to be right in the middle of it all.  She is usually more help than not, except for when she wants to get right on top of projects to see if she really likes them. She thinks all little blankets must be for her, right?  Not this one, Phoebe.  So first I cut a pile of little squares, each centered on a picture. 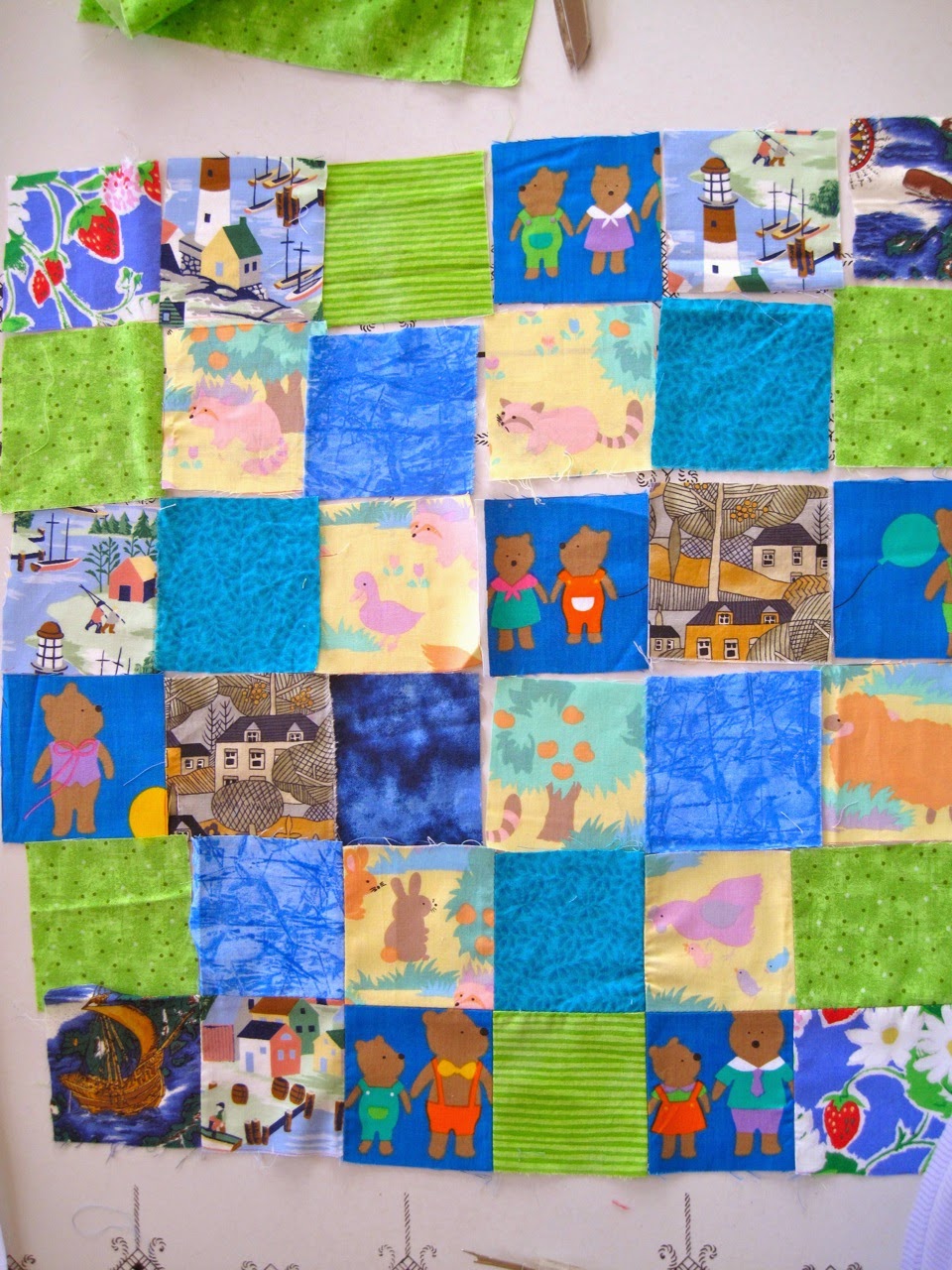 I played around with various arrangements of the pictures I'd  cut out, and then I photographed them to use as a map for putting them together. 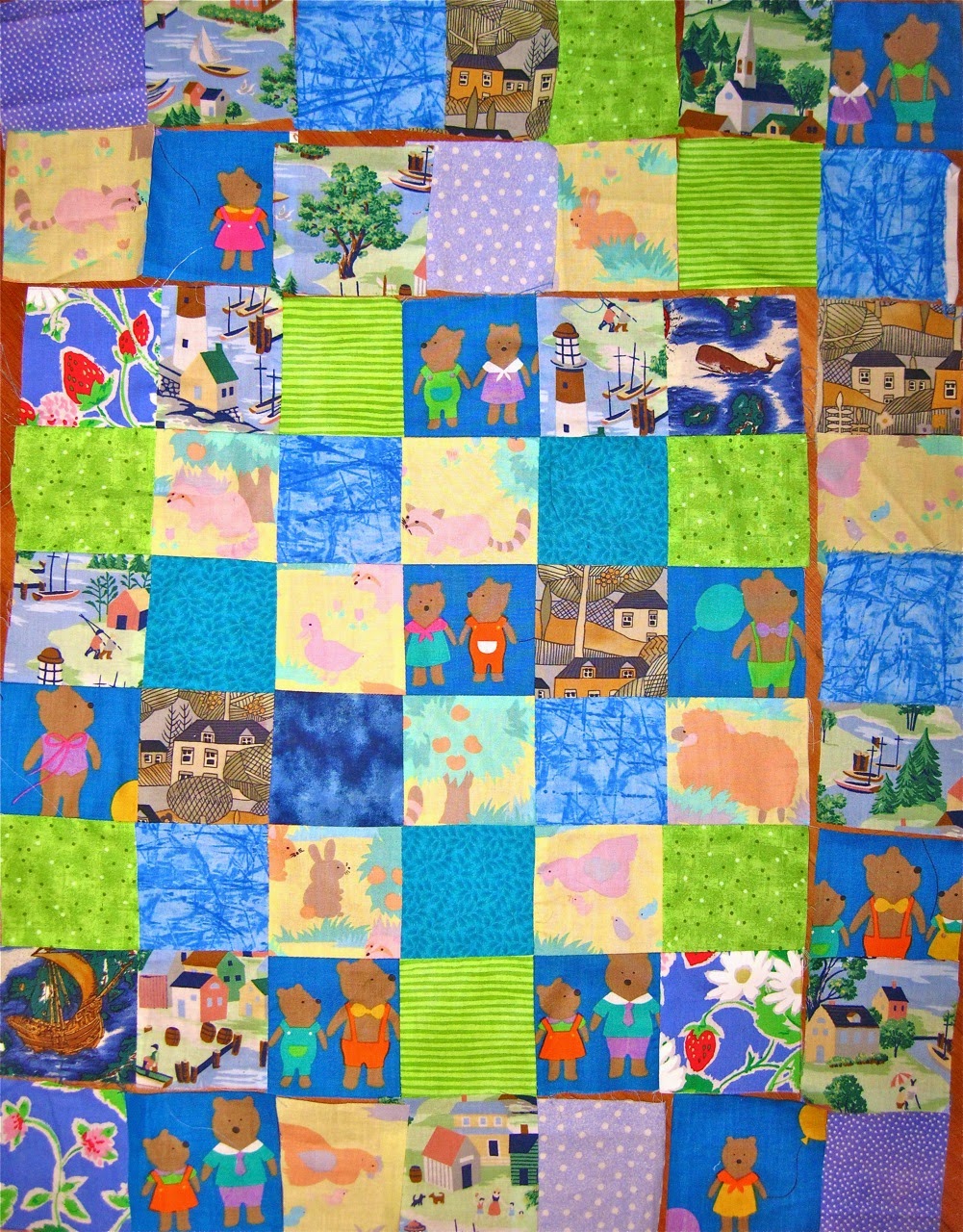 This is truly a scrap quilt, other people's scraps. I  bought the fabrics at a store that supports the local senior center by selling donated craft items.  You never know what or how much  you'll find. There were several times I wished I had just one more little piece of  this or that color or pattern but scraps force one to improvise.


Perhaps there is another name for this type of patchwork, but I call this a story quilt.  I hope the pictures of trees and whales and teddy bears, villages, churches, lighthouses and ducks, strawberries and polka dots inspire the imagination of the two little guys at the home where this quilt now flops around.  See the yellow squares that each depict a raccoon on either side of the watery blue? 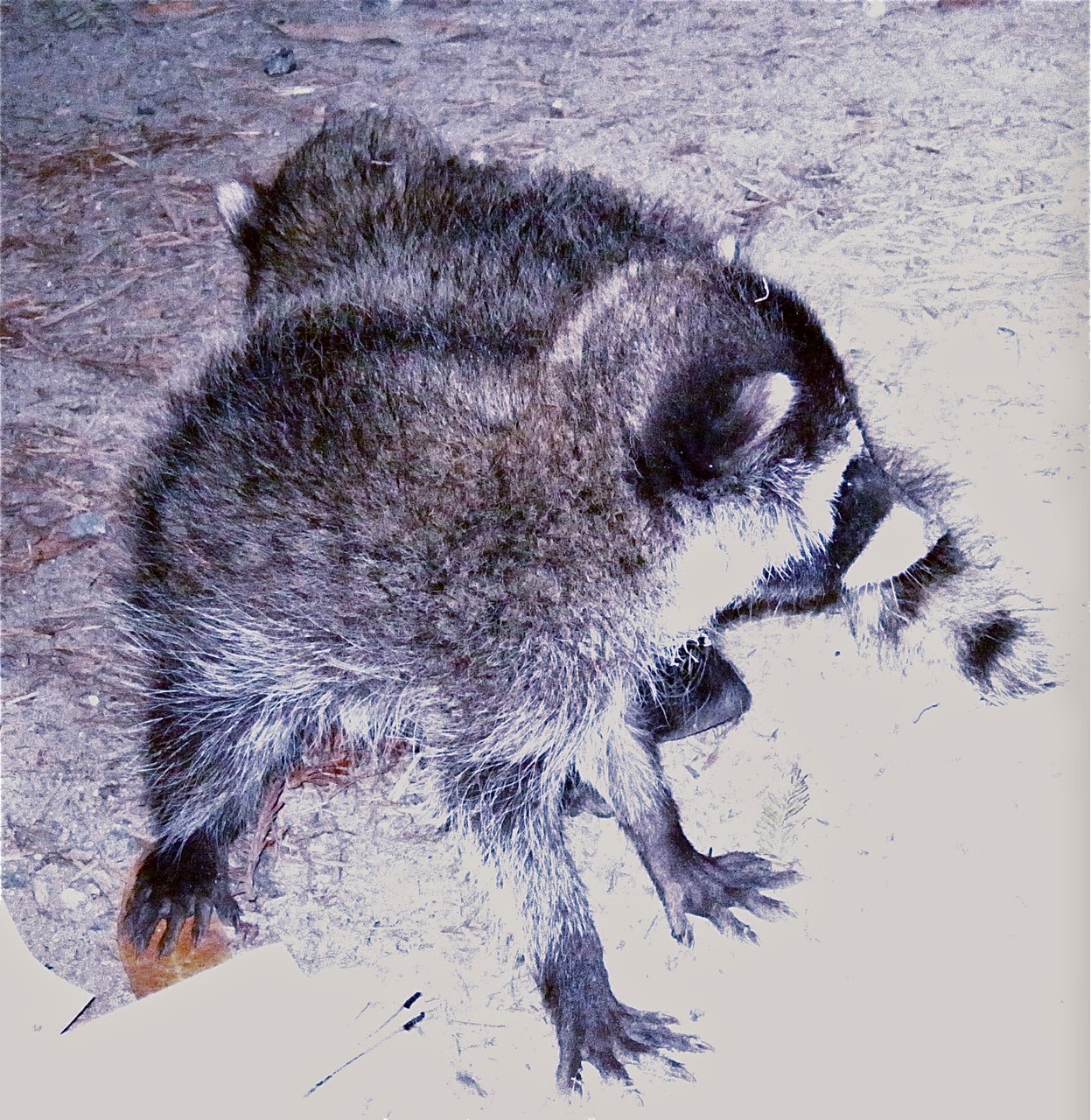 I know that real raccoons aren't pink.  The same week in June that I  was stitching these fabric pictures together I met some real baby raccoons who were born in a box in a crawl space under my brother's house.  We were cleaning and packing for his upcoming move  when one of the boxes wiggled a bit... Hello!

I think it might help me to dive into the messy process more often if I  keep a little log of the things I make.  I like the idea part of the process a lot.  I have fun pushing the elements into different patterns and then at a certain part of the actual construction I start to lose it.  It is a good thing babies are small and  that they aren't likely to complain that their blanket mixes pretend pinkish raccoons with giant strawberries and whales leaping in the waves. 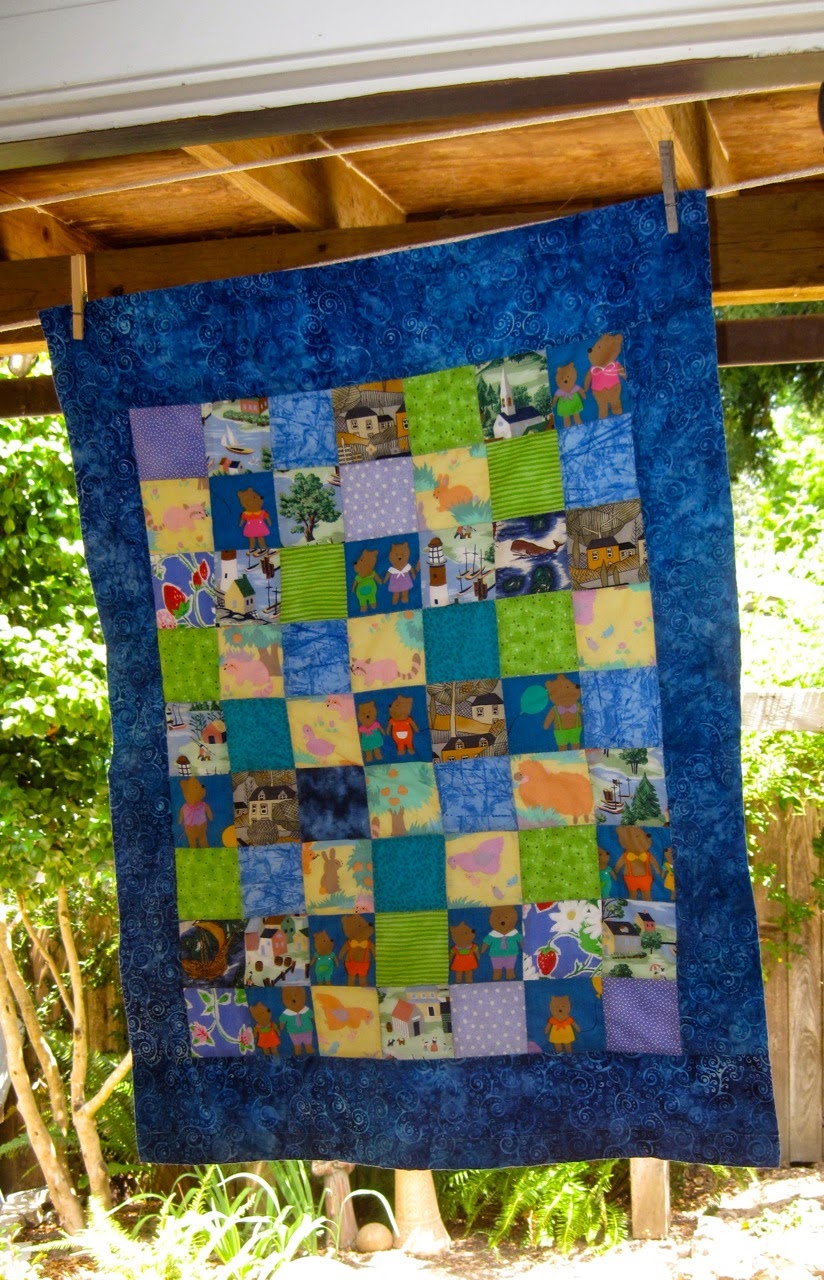 All freshened up and ready to mail...

I might have taken a better picture of it but I was just so happy it was now filled with 100 % cotton and machine quilted, stitched in the ditched style.  It was ready to go so I popped it in the mail.

My favorite picture of this quilt is actually the one I got back with a certain young fellow making use of it.

So that's the story of the little bears who one day visited the ocean but there's no need to stick to it.. we can make up a new one for nap time tomorrow.

Did you ever see that old 1948 movie "The Naked City"?  It ended with the line,  "There are eight million stories in the naked city, this has been one of them."  I suspect my little story quilt won't have quite that generative effect, but I do hope it will inspire some fun and wonder and maybe help me remember how much I enjoy ( most aspects of ) a sewing project.

Looking for the Real Thing? Stay Close to the Source

West of Highway 80 in Northern California there are still valleys where farm after ranch seems to be keeping it real. 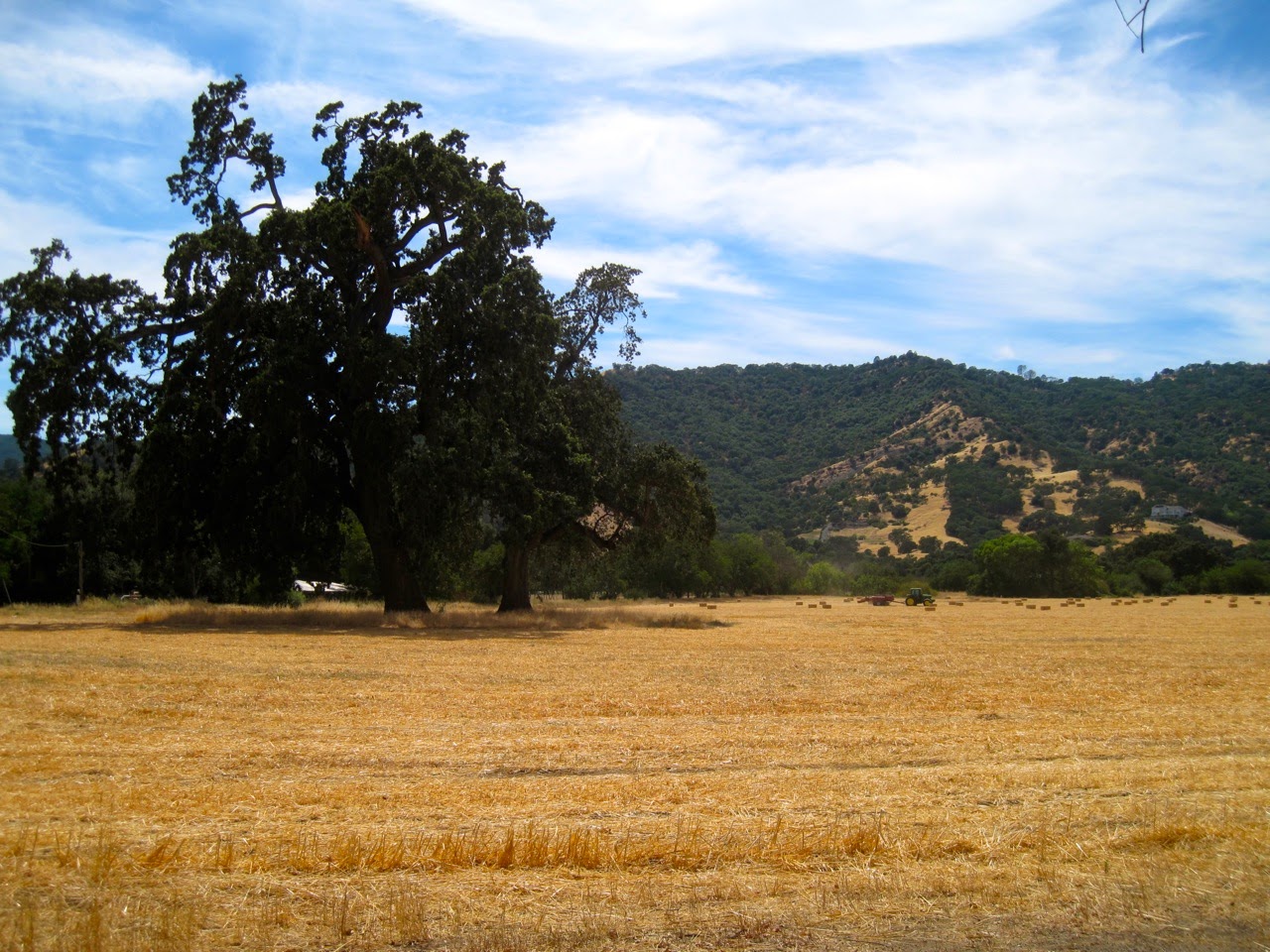 I was glad to see this farmer wasn't wrapping his hay bales in white plastic as some of the Sonoma county farmers have begun doing. It isn't pretty to look at, it might leach into the hay and where will the plastic go when the bale is unwrapped? 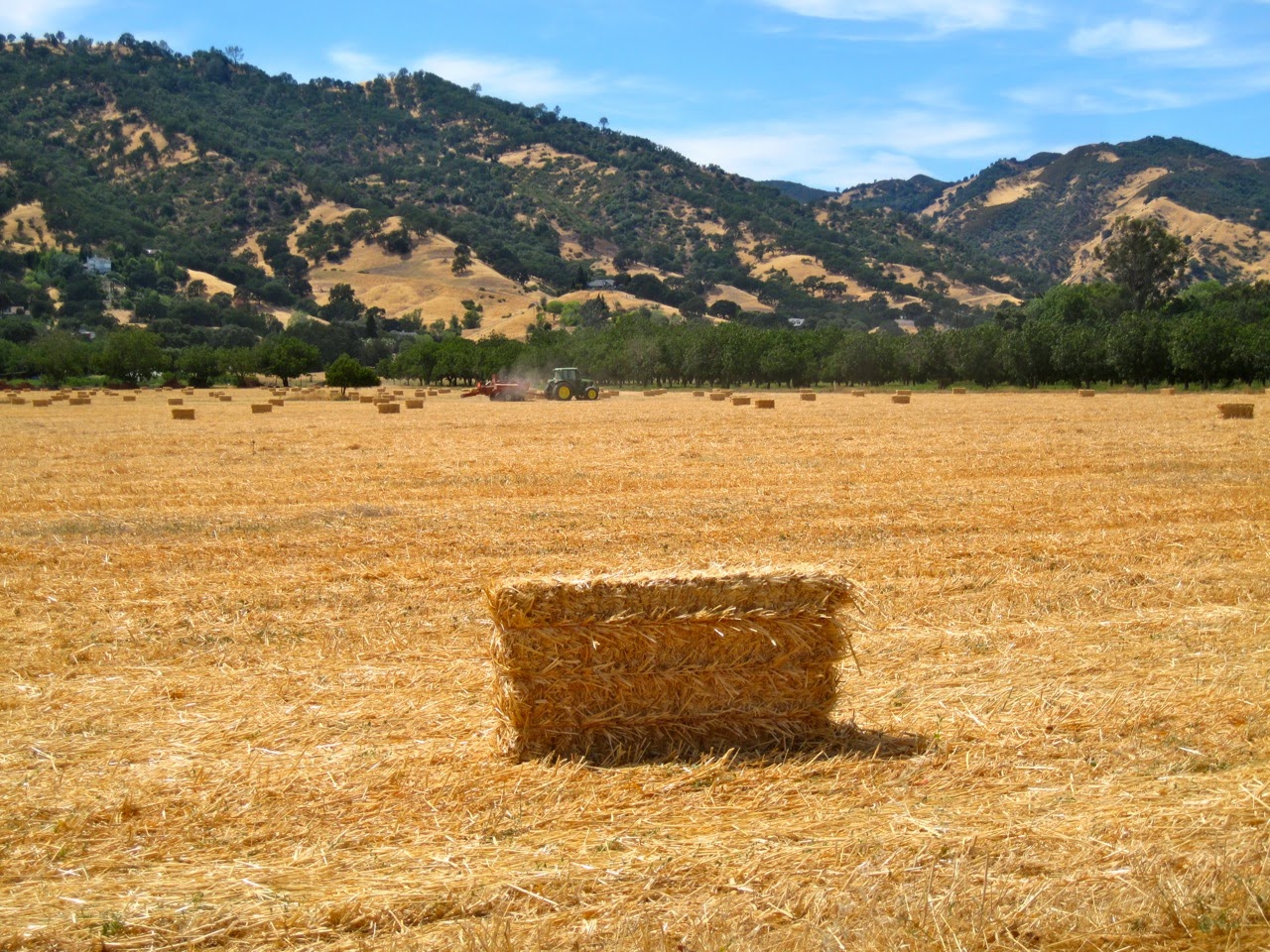 Across the golden field a plume of dust alerted us to the baler on his green John Deere tractor. 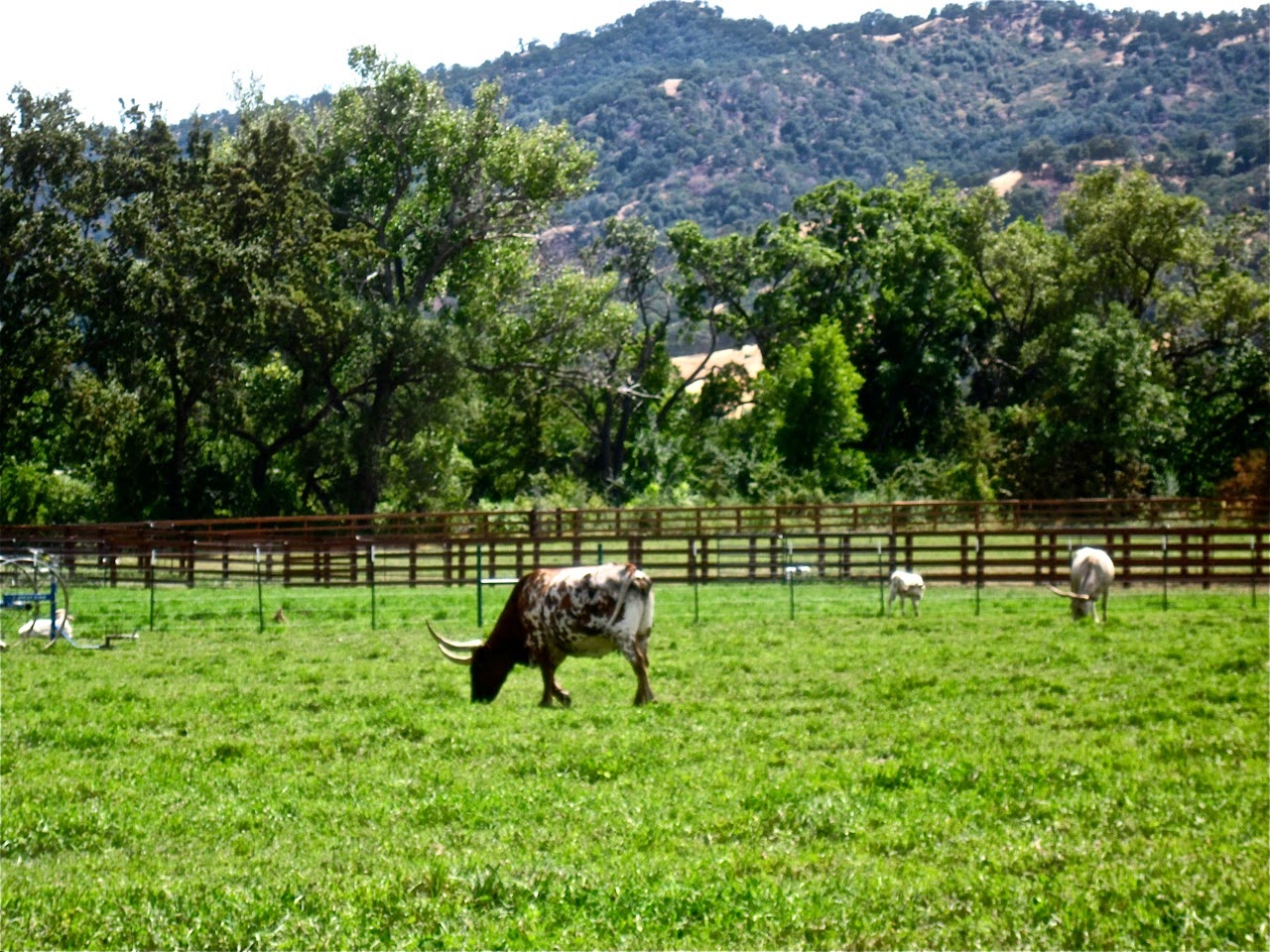 These longhorns were not the least bit friendly.  Not one ambled to the fence, nor even looked up from their grazing. They like their grass green and plenty of it. 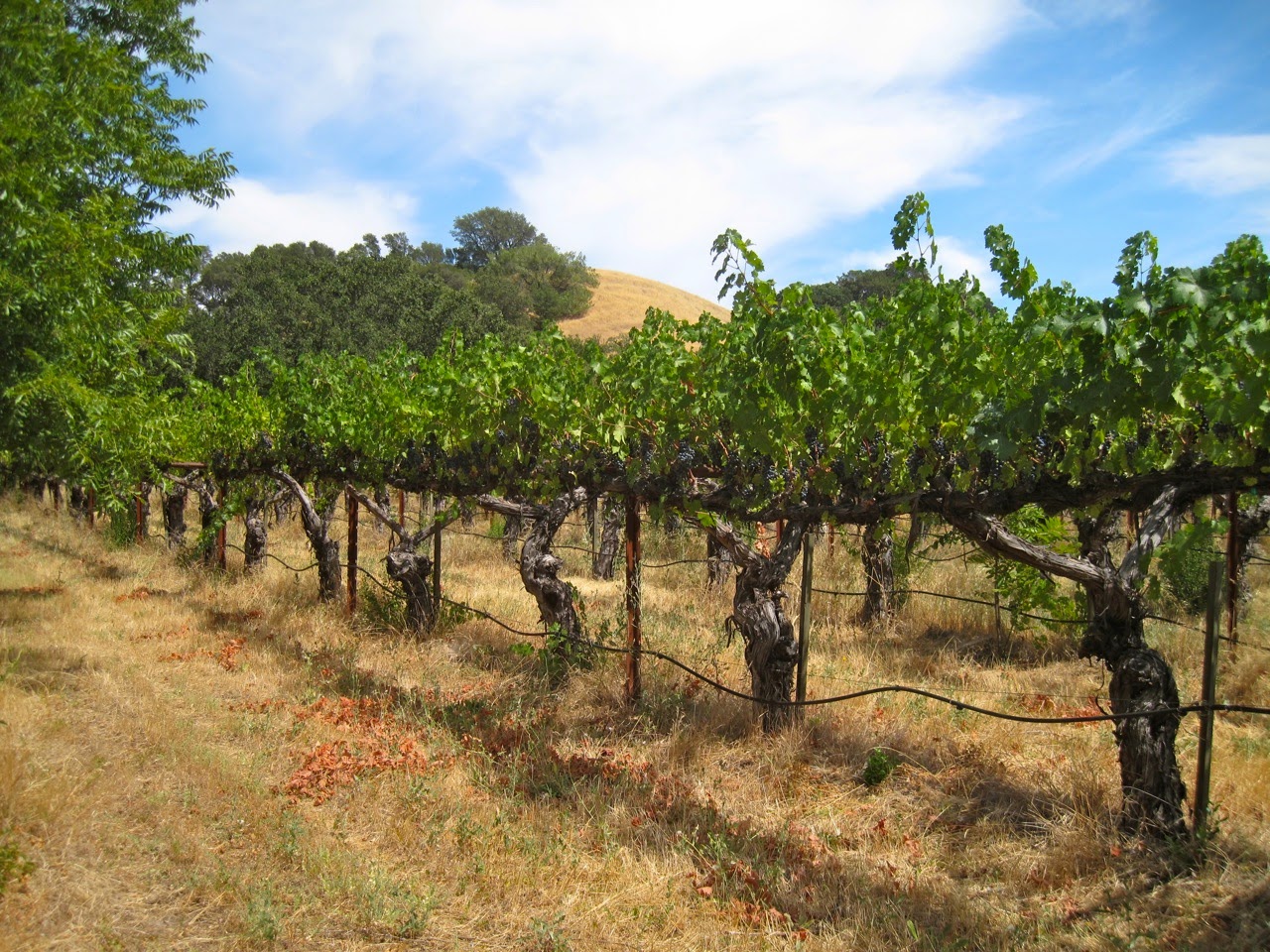 Just around the corner the grape lines march up the hill. The grapes are so purple they almost look black.  The other side of the road is hedged thick with fig trees that dangle their fruit over the lane.
We found a ranch selling peaches and bought a box of tree ripened beauties. 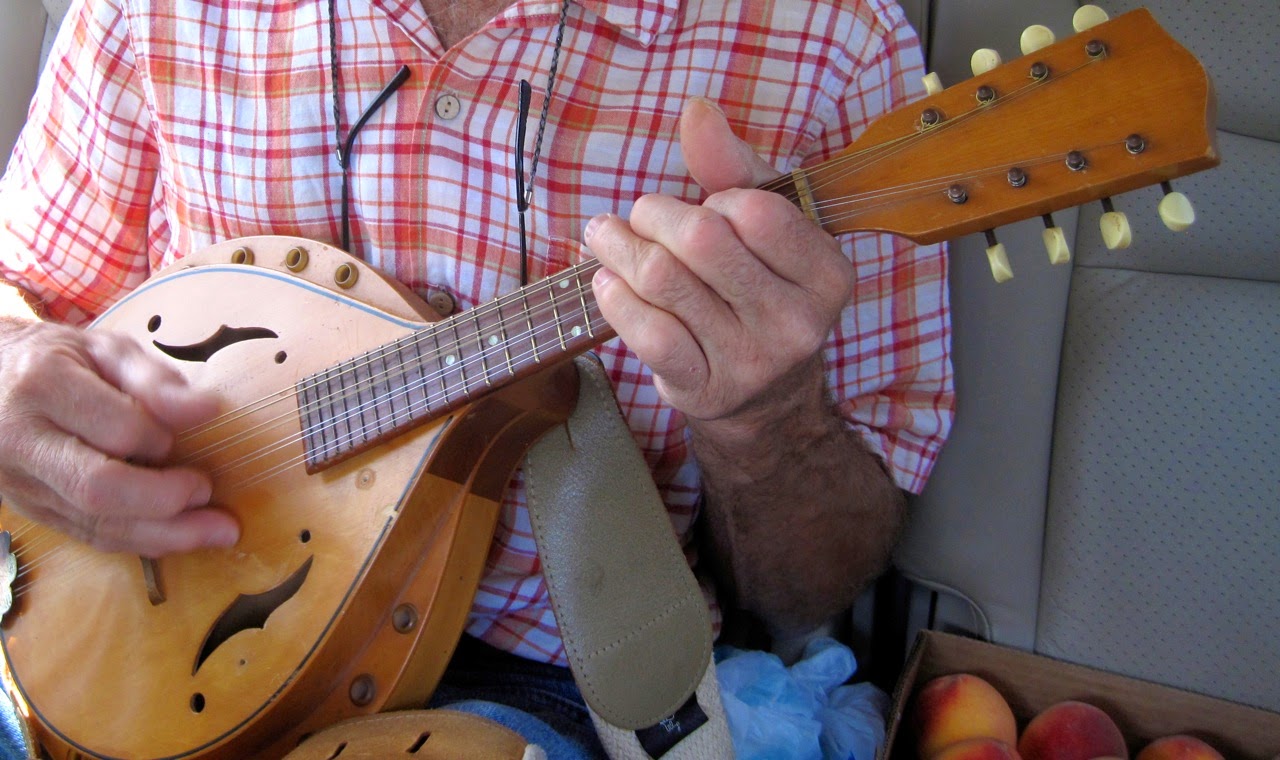 The passenger  who sat in the back seat with the peaches...so his momma could sit in front... started singing about bales of cotton and "if it had'na been for Cotton-eyed Joe I'd a been married a long time ago..." 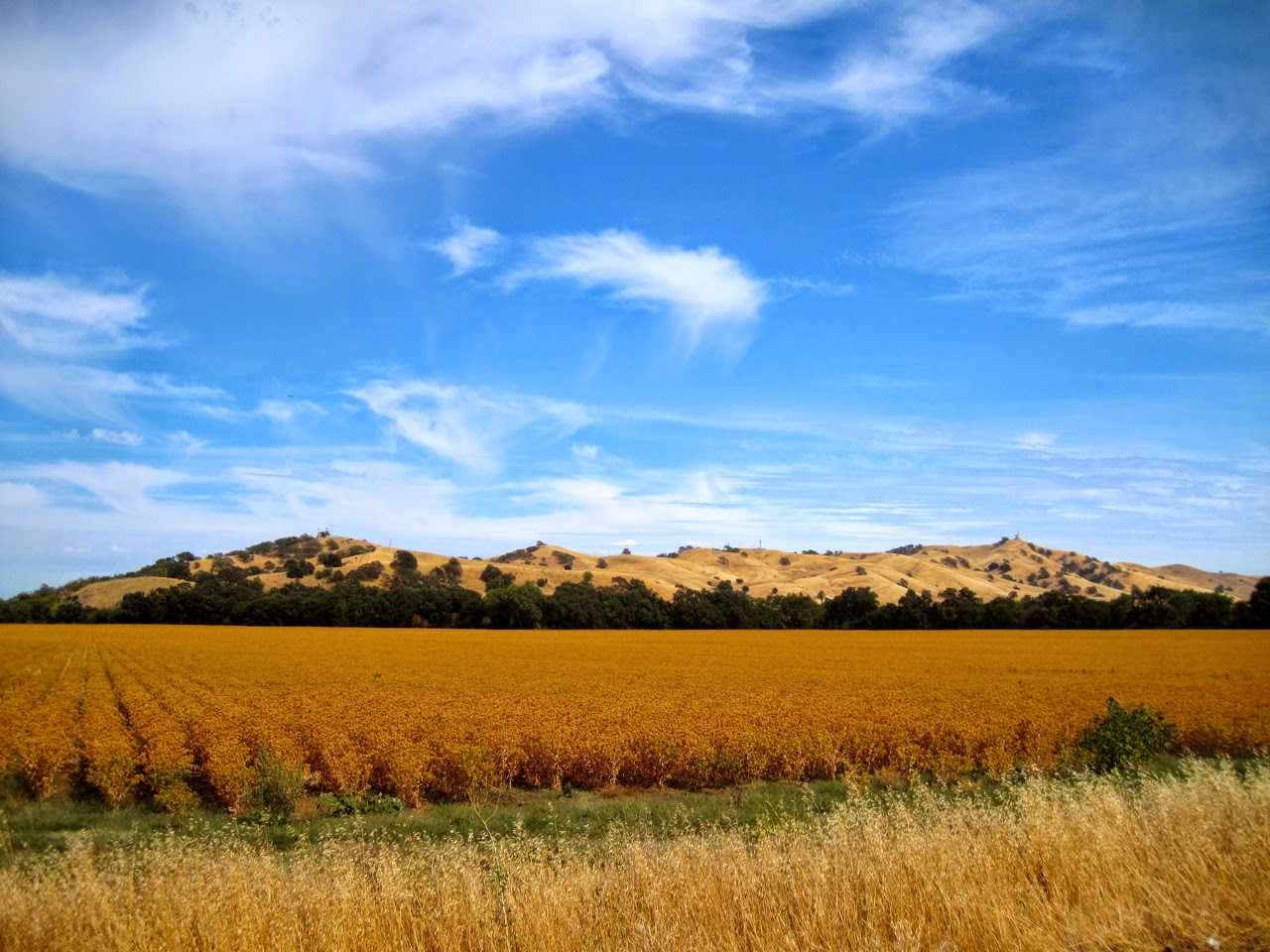 And then we saw a crop we weren't sure what it was...it certainly didn't look edible. 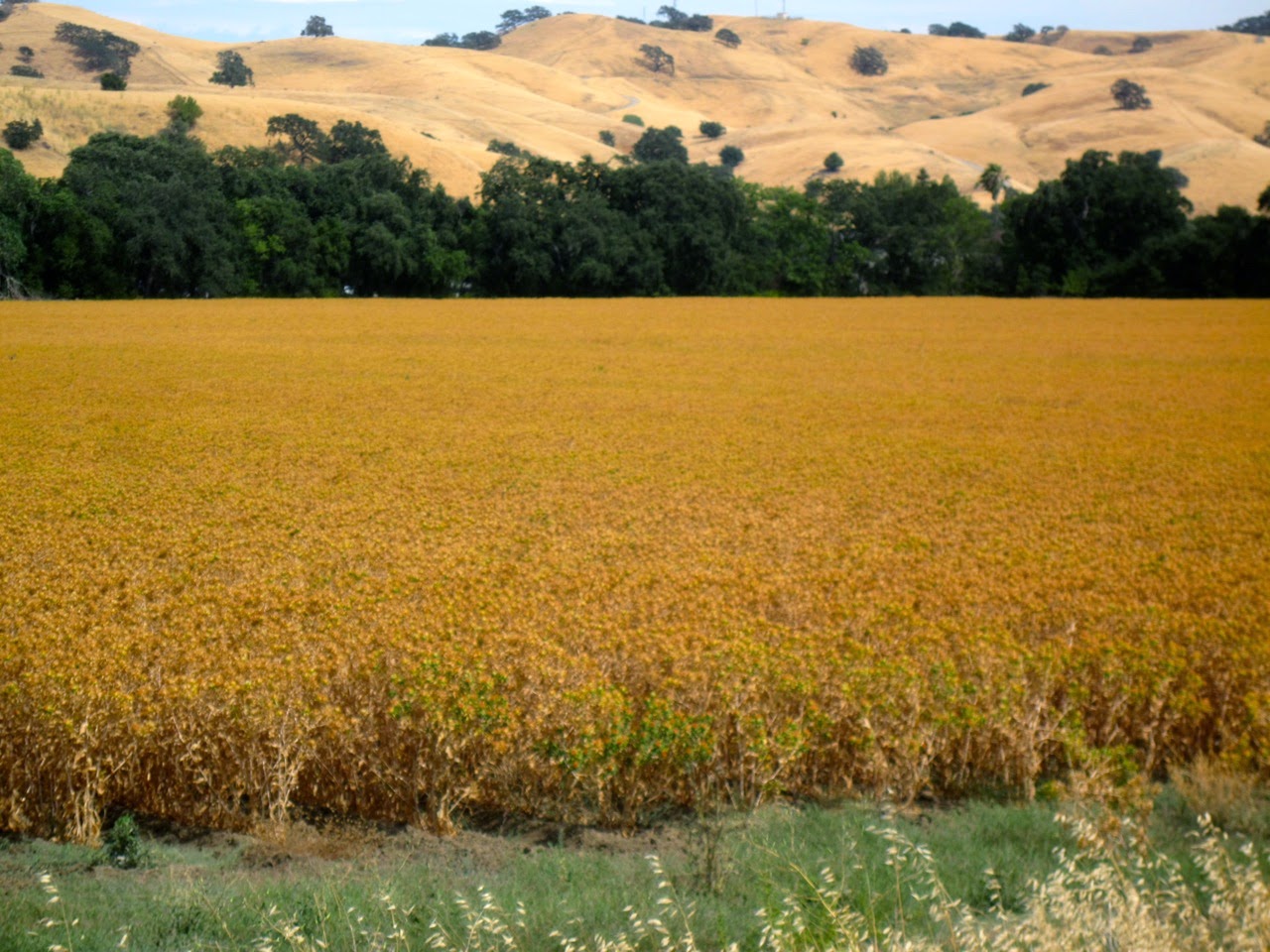 Such a rich color...we plucked a sample and sure enough, we'd found a field of cotton. 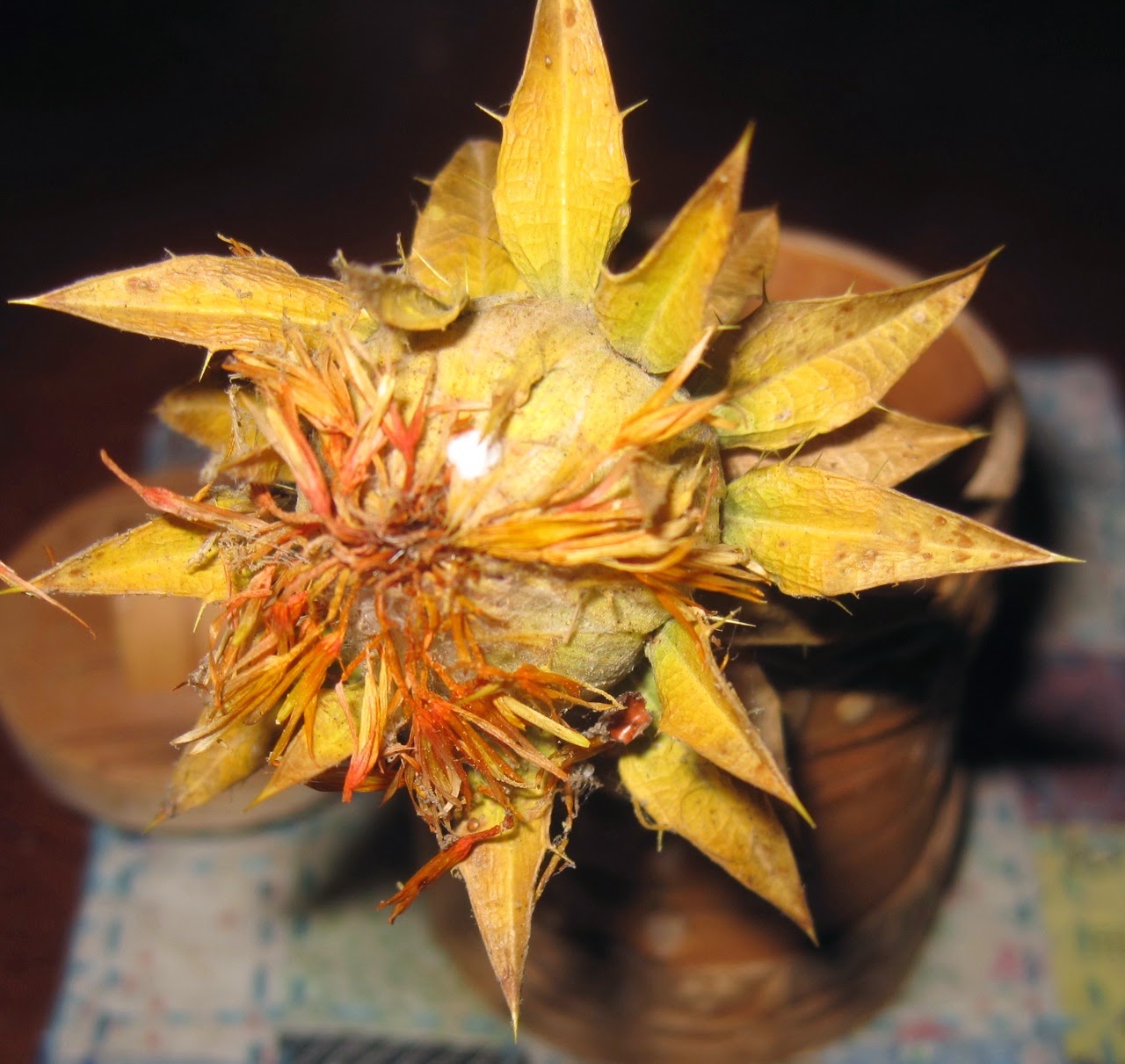 Just the day before I'd been searching for a nightgown that was not part but 100 % cotton.  Label after label disappointed me.   Cream is cream, butter is butter and cotton is cotton. Am I fussy or old fashioned?  I must be both, for synthetics and substitutes just don't cut it... Bucktown Lane  was a sweet road to find...one of the farms near the end sells honey and eggs on the honor system.  The creek is edged with a tangle of roses with round red hips and blackberry bushes and we passed goats and donkeys and horses and the chickens wander wither they will.  And Grandma who had asked us to take her for a ride enjoyed it all, even though she couldn't remember why on earth we had wandered out there in the first place. Farm girl that she once was, it was she who made us figure out what that prickly looking crop was...soft lovely stuff is sometimes hidden behind  sharp and spiked exteriors, and that is certainly true of cotton.

When you are looking for something real... it helps to stay close to the source...

Hope  you have a real good day!
Jeannette