Free Rein- One Decision after Another

One of the techniques I used to employ as a family therapist with children, and adults requested it too often times, was to give them free rein in a sand tray.  The size and depth of the box was very specified so that the diorama- like creation in the box was truly scaled to the child’s field of vision. They could make a small world from my large and very odd collections of miniature items sitting ready on nearby shelves and in trays and baskets at hand.

Often children who had a hard time talking would begin to relax and as they were drawn to different items and arranged them in the sand I could learn quite a bit before they ventured to explain or share anything verbally. Did they use the tray leaving all the sand as I presented it, raked smooth with a miniature rake and left level all around, or did they dig down to the blue bottom of the box and make a pond or heap the sand in little hills or make one very big mountain?  I never suggested the addition of water to the box, but then I never refused either; it was a good sign that they could ask for what they really wanted or felt they needed and water is a primal element of life and hope. 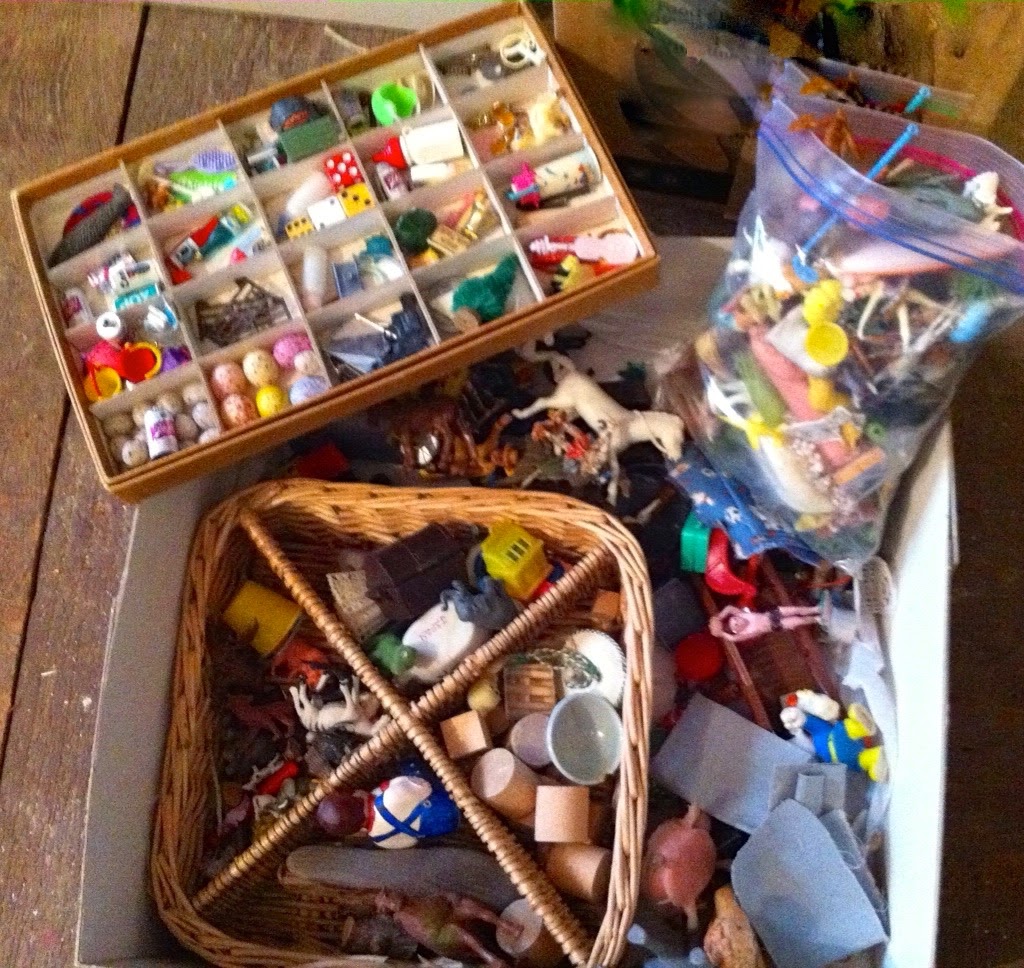 I would  watch quietly from the other side of the box, not interfering in any way.  When creating in the box began to slow down, if talking had not begun spontaneously, I would ask to be told the story or might only need to say a gentle opening line such as,  “This is the story of…” or   “One day…”  My young charge would usually take up the tale and walk me through the world they had pieced together.  Plastic plants, something I would not use in any other realm, made me happy when they showed up in sand tray worlds, for it usually indicated the child had some connection to nature.  People and animal figures were not all of the same scale and it was always interesting to find out who different figures represented.

There were times when the trays did not yield any words; eyes averted, little heads shook "no."  I wouldn’t press. I would ask permission, which was always granted, to photograph the tray and not take them apart until the person had departed.  I really had to watch the time when using sand trays.  I didn’t want any subsequent visitors to view another’s tray. So much for resting in between sessions, but in a way it was restful, lining all the horses back up on the animal shelf and digging up the secrets that had been buried in the sand.  Yes, the wet sand was a little messier to deal with, but those were some great worlds that were created when they had water in them.

This week I have been opening the boxes of toys I used for so many years.  They have been stored away while I was down in Carmel seven years. Since returning home I have taken yet another year to contemplate whether I want to, and whether it truly makes sense to have a dedicated therapy office again; I have decided that I will not.  It was interesting to me how like a child looking at my own story I felt as I explored the boxed up toys.  There were my little black rats, plastic flies, beautiful white doves, wedding cake toppers, muscle men, guns, garbage cans, tiny wine bottles, beer cans, horses, swans, flags, balloons on wires, fences, beds, cats, dogs, swings,umbrellas, knives, eggs and those plastic leaves and trees. I found space ships, red wagons, bikes, skateboards and cars as well as tiny money and miniature playing cards, babies and old ceramic figurines. There are even people that I made and baked out of clay to be sure the many colors of flesh and types of bodies we come in were represented. The basket trays had dividers and I  had filled them with mirrors, custom made wooden blocks, logs from my garden pruning and smooth stones from the beach.

One day a child who hid behind my couch most of his first session made a winding path of pebbles up a mountain he had shaped.  He took pieces of green cloth from the shelf, made a tent, planted a tree next to it and stuck a flag on the mountain’s peak.  He was starting to believe he could feel better about his life, but there still weren’t many people he could trust.  Not a dog or a squirrel or even a bird was up there with him; he was so alone.  But he had made a path and we talked about how he could choose to come back down the mountain when he felt safe. Eventually he chose to bring many more elements into his world and his mountain got more decorated and his valley had some new doings too.

Well, I have decided to give myself free rein. It's time for a new field of vision.  I have some ideas and like some of the young children I watched grow, I think I'll just set  down a few stepping stones one after the other … yes.