Memory...a Swamp of Nostalgia or a Call to Action?

Memory is at best,  says John Steinbeck, "a faulty, warpy reservoir."  And so at 58 years old he, with his poodle, Charlie, took a  transAmerica road trip to  reacquaint himself with his country so that he could do more than write about the United States and her people from memory.  I recently finished reading  Travels with Charley. This won't be a book review,  I'm just sorting out some feelings it brought up in me.

I enjoyed much of his perspective of places I have driven 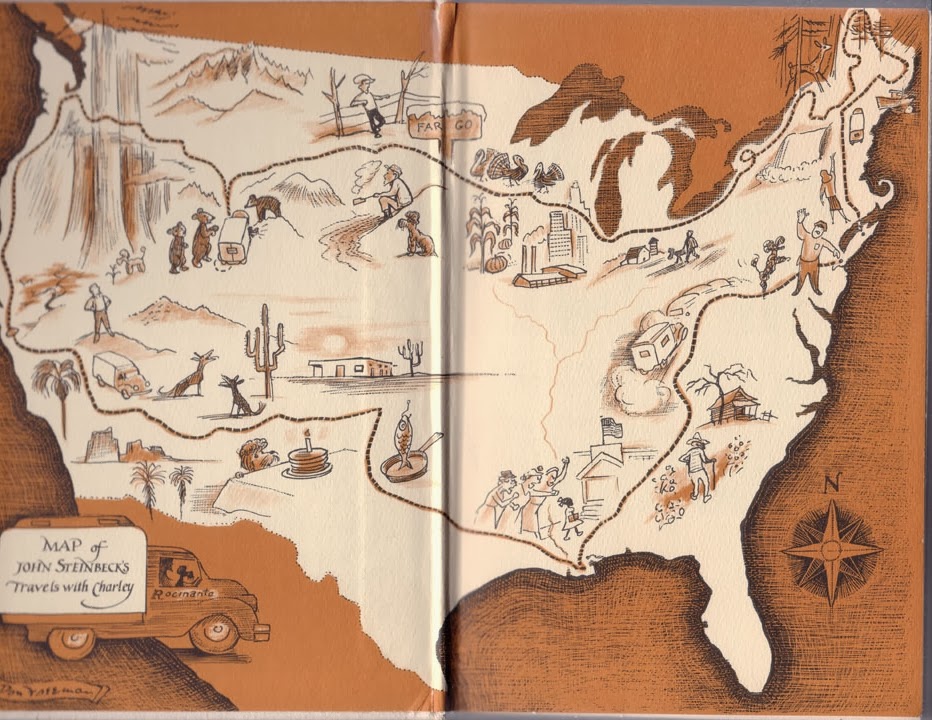 through and a few I haven't, but my interest intensified when he returned to the place of his birth, not only because of Steinbeck's unique history on the Monterey Peninsula, or even my recent sojourn of seven years there, but because he captures the commonality of the feelings of returning to places dear to the heart only to find them so changed as to be near unrecognizable.

That was a woody hill with live oaks dark green against the parched grass where the coyotes sang on moonlit nights.  The top is shaved off and a television relay station lunges at the sky and feeds a nervous picture to thousands of tiny houses clustered like aphids beside the roads. (p.194-5)

His descriptions of Monterey, which I admit I am missing some these days,  were tripping off deeper switches of the myths I swaddle of my childhood spent at the foot of a mountain.

There was a little town...

Can't we all, in some way,  fill in the blanks that those ellipses create?

I find it difficult to write about my native place, northern California.  It should be the easiest, because I know that strip angled against the Pacific better than any place in the world.  But I find it not one thing but many-one printed over another until the whole thing blurs.  What it is is warped with memory of what it was and that with what happened there to me, the whole bundle wracked until objectiveness is nigh impossible. (p. 194 Penguin Ed)

Steinbeck knows his complaint  is typical, sees how common is his resentment of what is new and those who have brought it, but no sooner than he has acknowledged that we are all the newcomers to someone, no sooner than he has labeled his observations as a "flurry of nostalgic spite" ( p.205)  and a disservice to the Monterey Peninsula, he laments other changes he encountered.

Nostalgia can be overwhelming, and nostalgia is one  element that can blur and warp memory.  I see it in myself.  I coddle memories of things as they once were as the world changes  around me.  And it isn't that I couldn't make a case for it;  much beauty I have known has been destroyed.   There are other aspects of social change that I don't experience as  improvements or  necessary as well.

So somehow, taking this little road trip with Steinbeck highlighted for me the need to step carefully around the mushy ground of nostalgia which in its self-focus tends, to keep us looking back.  But there is firm turf in history and informative power even in our own memories worth  keeping and sharing to  encourage and inspire in self and others,  forward focus to protect and strengthen that which remains.