The cat wanted out and so I saw the sunrise, the eastern sky uniformly orange as if one heavy stroke of a paint laden brush had been applied.  The foothills of Mt. St. Helena were still stubbed  in  muted shades of shadow.

I returned to my darkened room and lay back on my bed but soon the memory of the color bright sky drug me up to go out and look again.  The morning was now older, I found only a pale  version of that fiery view I had so quickly  taken in.   The colors of light coming wait for no eye.

I had not, in fact, seen the sunrise, but only the angle of one fractional moment. I had seen no more than a freeze as if captured by a  camera’s lens or a painter’s interpretive palette. I had taken  only one spectral glimpse of a majestic particulate parade that casts its bouncing rays from ever greater height as surely as one’s breath travels to and from the lungs, which breath is sometimes also, sadly, as summarily hailed.  Ah, yes, a new day, sunrise, life….
I’m reading a memoir that Ivan Doig wrote, This House of Sky.   Speaking of one of his professors he says, “…I was given encouragement and I answered with effort.”
Let me answer with my efforts the primal encouragements so readily available with wakening.
Posted by Jeannette at 10:10 AM 5 comments:

By Design, the Wonders in a Garden

One gardener's dead vines hanging from a tree is a hummingbird's swing set.


I can't get very close and none of my photos have quite captured it, but I see this hummingbird daily from my deck and kitchen window as it swings on dangling dead vines that escaped cleanup and trimming two years ago.  Our tenants had let vines grow crazy on all the fence lines, choking out roses and meandering into the redwoods. We pulled and pulled and got most of them out at both ends..but some were so out of reach.

The vine remnants used to occasionally irritate me hanging down in my line of sight.

But this little bird has made me love the tangles that hang down, for everyday this bird comes and sits and swings and preens in the shade of the Sequoia tree from which the dead vines hang. 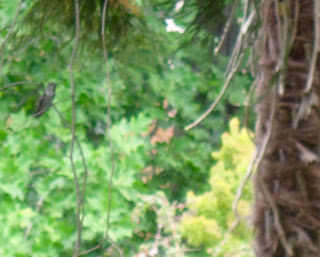 These photos just can't convey so I just now saved my post and, camera in hand, walked into the kitchen on the chance that my little pal might be again swinging in the breeze.

Why have I gone to the trouble of posting these admittedly inadequate photos?  I need the reminder and plot it  here in gratitude for the sweet solace this little bird has brought me day after day. Clearly there is the reminder that many times there is purpose that we do not at first and perhaps on this side, ever see.  And then there is just the contrast...the world heats in sorrows and still the birds find a perch where they can have a quiet moment.