We were just out taking a walk above the beach in town which is still closed off due to storm aftermath. 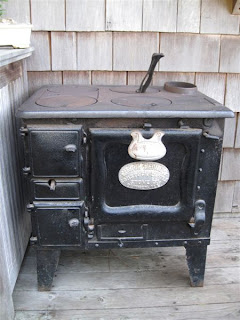 There was an estate sale in a classic red tiled hacienda and the only thing I wanted was this stove.
This fits into the category of what historically my husband has called  "heavy dating." Our Sebastopol garden is home to many large rocks that were lugged home on unplanned "heavy dates."  For example, one time coming home from my brother Lloyd's Northern California ranch we decided to take the back roads. On a beautiful stretch of lonesome road near French Creek west of the north south highway 101 corridor we rounded a corner and there, right in the lane, was a lovely large egg of granite.  It was our civic duty to remove it and we had just enough room in the back of the car to nestle it in.
So it was with this stove...we stumbled upon it quite accidently and couldn't go home without it. Fortunately it is not that big that  two people can't  handle it. Up and in it went, to the back of  our car. 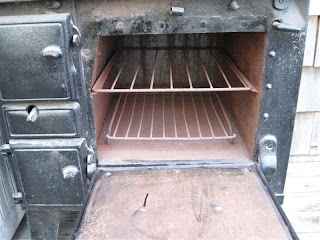 Is it in perfect condition?  No.  Do I have a place to put it right now?  Not really.  But it spoke to me.
My brother Steve understood right away.  It's an off the grid, when the power goes out, cabin in the woods, independence, camp out and bake hot bread relic.
I enjoyed reading about the history of the company that made this stove.

As American pioneers moved westwards in the early 1800's west central Illinois was the new edge of the wilderness. The natural harbors on the Mississippi River were the first and fastest to grow in the region.  As people moving west couldn't quite carry everything with them they would need once settled  ( talk about heavy dating, honey load up the wagon)  hardware stores and general mercantiles were the going businesses of the day.   Allen Comstock moved to Quincy, Illinois and Timothy H. Castle  moved to nearby Adams county  in the mid 1830's and both of them started hardwares bringing in stoves by riverboat from New York and St. Louis to sell in their stores.
By 1846 Mr. Comstock opened a foundry and started making his own stoves. Other foundries also set up in the area  making that bend in the Mississippi the veritable Tigris and Euphrates of American stoves. It is recorded that more stoves were made in Quincy, Illinois in the 1800s than anywhere else.


In 1849 Allen Comstock left Illinois for the California gold rush leaving his brother Enoch in charge of the company. In the 1850s Timothy Castle bought into the stove foundry forming a partnership. During the American Civil War the company name changed to Comstock-Castle Stove Company and the Castle family took over the management of the business. The present management of the company is sixth generation of this Castle family.  In the early 1900s Comstock-Castle's logo claimed to be the "World's Largest Sellers." ( from company website) 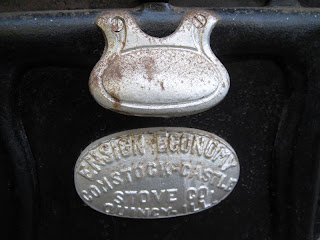 During the depression years of the 1930's it was no longer profitable to make these small domestic stoves and natural gas had became the preferred fuel.  Wood and coal stoves were phased out of the company product lines. This one we found isn't any top of the liner, in fact it says "Economy" right on it, but as I said, it spoke to me and  I want to listen to the stories it will tell.  How old is this old girl? It had to have been made after the 1870's and no later than the 1930's.  I suspect it is one of the "later" models.  Maybe I'll contact the company and see if  they'll tell me more specifics.

Reading about the snowed on, snowed in folks out east this last month, no power, no heat, I bet more than a few households would have been glad to have a little woodburning oven to cuddle around with a kettle on the top and bisquits in the oven.

Well, back to work... I can't become a winning contestant in the American Idle Contest.
Posted by Jeannette at 11:15 AM 9 comments:

This is what living on the coast for a few years has done to me....
I don't plan to eat any of the mushrooms, but after every rain shower they pop up everywhere and they are so varied and fantastic looking that they have invaded my imagination.  Couple the daily mushroom surprises with discovering the fun of the "paint" program on my computer and this is what happens. 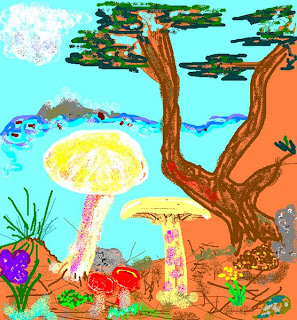 Happy St.Valentine's Day. February 14th
a post script added 15 February
I have fielded quite a few email questions about the microsoft paint program after posting this painting.
This is a picture I drew on a blank screen, no photograph was used.  It is a representation of many common elements in the environment where I live, but not any particular spot or certain tree.  Please remember not to use any of my work or images without my express permission. Thank you.
Posted by Jeannette at 10:01 AM 3 comments: 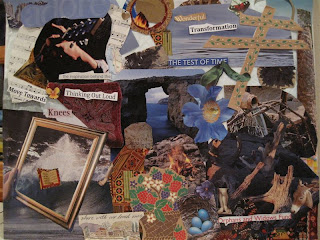 I was invited to a 2 hour make a collage gathering.
I could have poked along more slowly but there was a time limit to find, cut
and arrange images.  Of course I can figure out what it  all means at my leisure.
A click will enlarge this photo if you'd like to see it larger. Your back button will then return you to the blog.
Thanks for the visit. Leave me a hello so I can come find you too.
Posted by Jeannette at 7:23 PM 2 comments:

Mushrooms, Books and a Backward Look. I'm on a Roll...

I took a little time this morning to scroll back though this web journal of mine.  I started it exactly thirteen (13) months ago on January 10, 2009.  On a near daily basis I have to reject automated comments with  strange advertisement  for products I would never discuss here, and occassionally get nice comments from friendly folk that actually read my blog, but I can only actually sit down to create post in those rare moments of confluence when both inner and outer contraints allow.  And of course, given all the things there are to do in the world, in a life, in a day, sometimes quite a few days pass without me writing or posting photos here even when I have scrawled away in my handwritten journal...well, you don't want to read that.  I'm a believer in making things fit for human consumption, so to speak.