Acorn Woodpeckers to Volcanoes ... Roll along on our Northern Cal to Reno Loop

While we do live definitely in Northern California, we don't live far enough north or east to see Mount Shasta until we mount up on our wheels and ride. And on June 17th we did just that.
Everything is green and gold as the road rolls north until suddenly from various vantage points, a white peak looms into view.
As you approach it's like peek-a-boo...
and I felt happy as a child waiting for the next sudden glimpse around a bend.
Black Butte is a lava dome satellite cone of Mount Shasta and has already lost any frosting she may have had this last winter and spring.

I took 191 photographs Tuesday and Wednesday...lots had to just be deleted.  None of my photos are great...but the subjects themselves keep me trying. At the ranch, the home of one of my brothers and 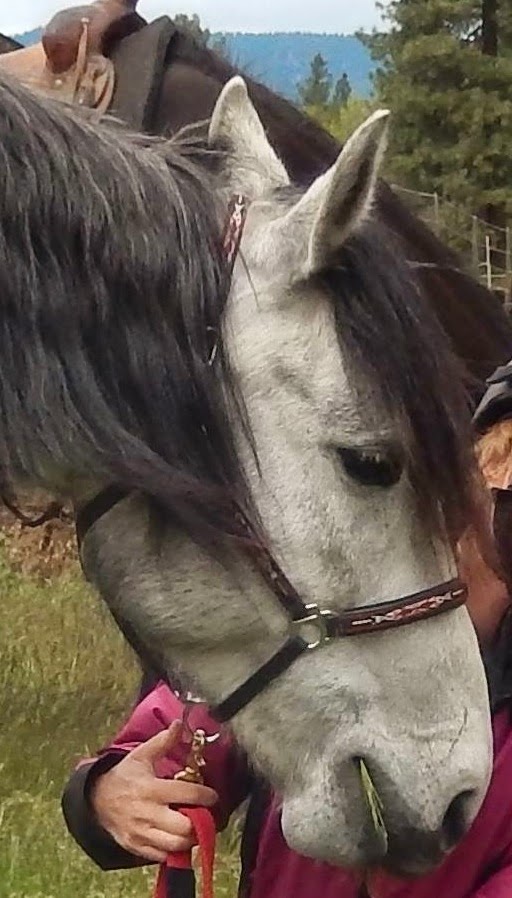 his dear happy-to-have-her-new-horse wife, I watched birds flock to a second-story-balcony-isolated-from the-cat  bird feeding station.  I saw a lot of sharing, birds of different feathers fed together.  In an hour's time I saw 4 acorn woodpeckers, a pair of Rose-breasted Grosbeaks, several Rufus sided Towhees, a lone Nuthatch, a very large woodpecker that I think was a female Red-shafted Flicker, several Quail, Black Birds, Red-winged Blackbirds, Blue Jays, Banded Doves and at the adjacent feeder, Honeybees and Hummingbirds. Alas, the bird photos were  taken through the window glass.

Remember you can click on the photos to see them enlarged.


Well...we better keep moving....yes there are horses and goats, one sheep, two dogs, one cat  and beaver in the creeks and osprey diving into the ponds to snack on fish...but we had also promised to visit some extended family in Reno.  So, after pancakes on the ranch, we got on the road, turned back toward Mount Shasta and then east toward the historic timber and railroad town of McCloud.
We had checked with Uncle Google and learned that the road was open through Lassen Park; and you know, volcanoes have their draw.  The Ranger pamphlets say that Lassen Volcanic National Park is "a valuable laboratory of volcanic events and hydrothermal features."   I think that rather euphemistic language.  Only 100 years ago this peak blew a huge cloud of ash over 30,000 feet into the air; hot stuff, these volcanoes. Hat Creek travels that neighborhood too.  Hat Creek looks quiet now, but ...

"On the  night of May 19, 1915, the few people homesteading outside of Old Station along Hat Creek near the foot of Lassen Peak, a volcano in northern California, went to bed expecting a peaceful night’s sleep. By now they had become accustomed to the sounds of small steam explosions coming from the volcano, which had been intermittently active during the past year. Around midnight, Elmer Sorahan

was awakened by his dog barking furiously and pawing him. Dressing quickly, Elmer went outside, expecting a bear or other animal. Instead, he dimly saw a 12-foot-high wall of muddy water and logs rumbling down Hat Creek. After running more than a mile to warn his downstream neighbors, the Halls, he burst through their front door exhausted and shouting “Get out! get out! there’s a flood coming.” Mrs. Hall quickly spread the alarm downstream by telephone, and then the family scrambled uphill just before the house was swept off its foundation.
The next morning residents of the area saw that a wide swath of the northeast slope of Lassen Peak had been devastated by a huge avalanche and mudflow triggered by a powerful explosion at the volcano’s summit. Fortunately, because of the warnings, no one was killed, but several houses along the creek were destroyed. When Lassen Peak erupted again on May 22nd, the area was further devastated by a high-speed flow of hot volcanic ash and gas (called a “pyroclastic flow”), and the incorporation of snow into this flow generated new mudflows. Ash from the eruption rose high into the air and wind blew it eastward. Fine ash fell at least as far as 200 miles from the volcano. Because of the eruptive activity, which continued through 1917, and the area’s stark volcanic beauty, Lassen Peak and the area surrounding it were declared a National Park in 1916."  ( from the .S. Geologic Survey) 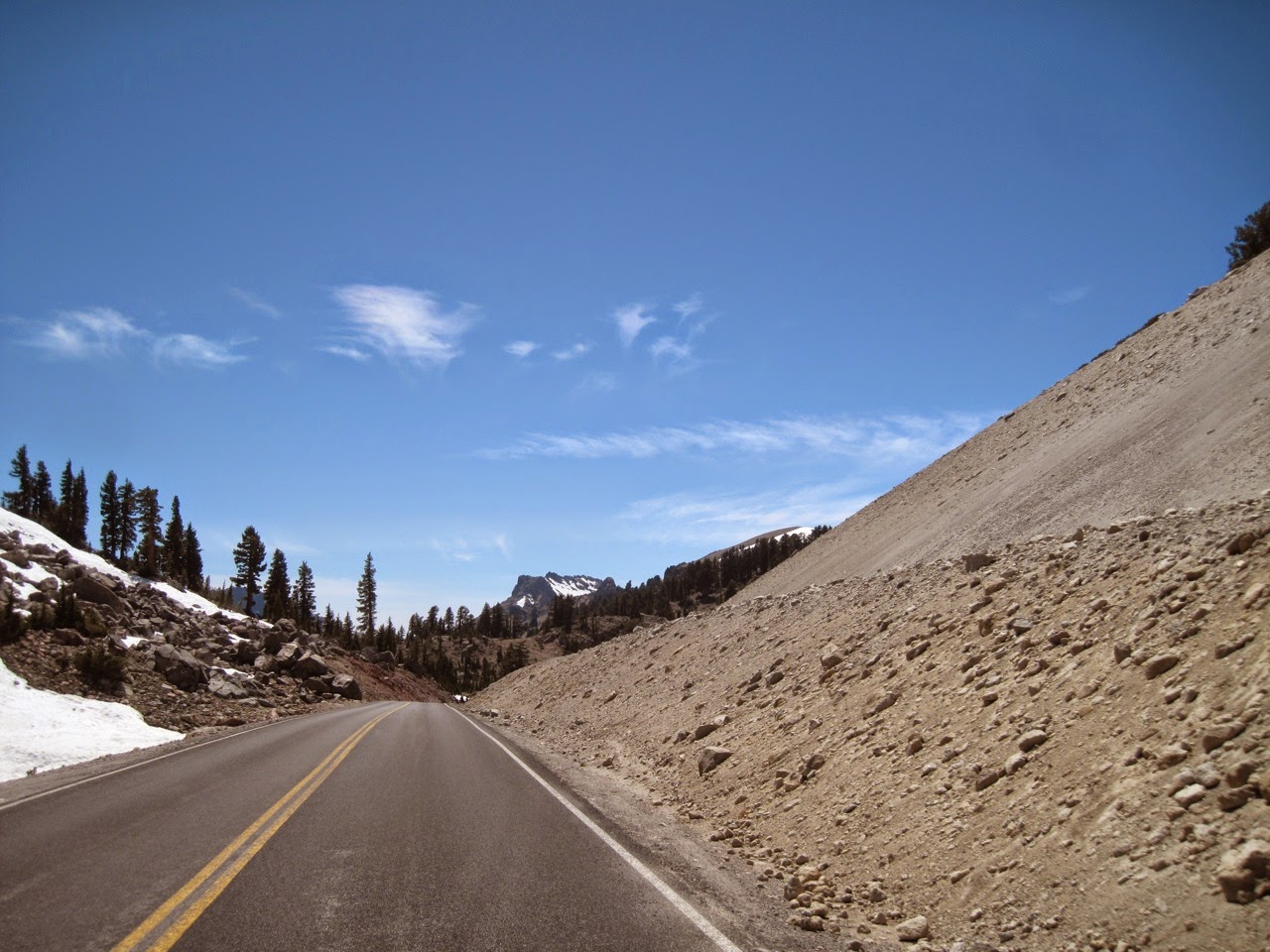 Yikes, President Abraham Lincoln signed a bill to set aside Yosemite Valley to the state of California to be held for public recreation..."inalienable for all time," because of its  unique beauty....but  Congress declared the entire Lassen area a national park because it is a bit of a hot spot!  Park brochures use words like "stark beauty" rather frequently and there are areas in the park with signs that read "Devasted Area."

But it is indeed a beautiful area...and perhaps some day we can visit longer...but we were on a mission and though we stopped here and there we were just passing through. 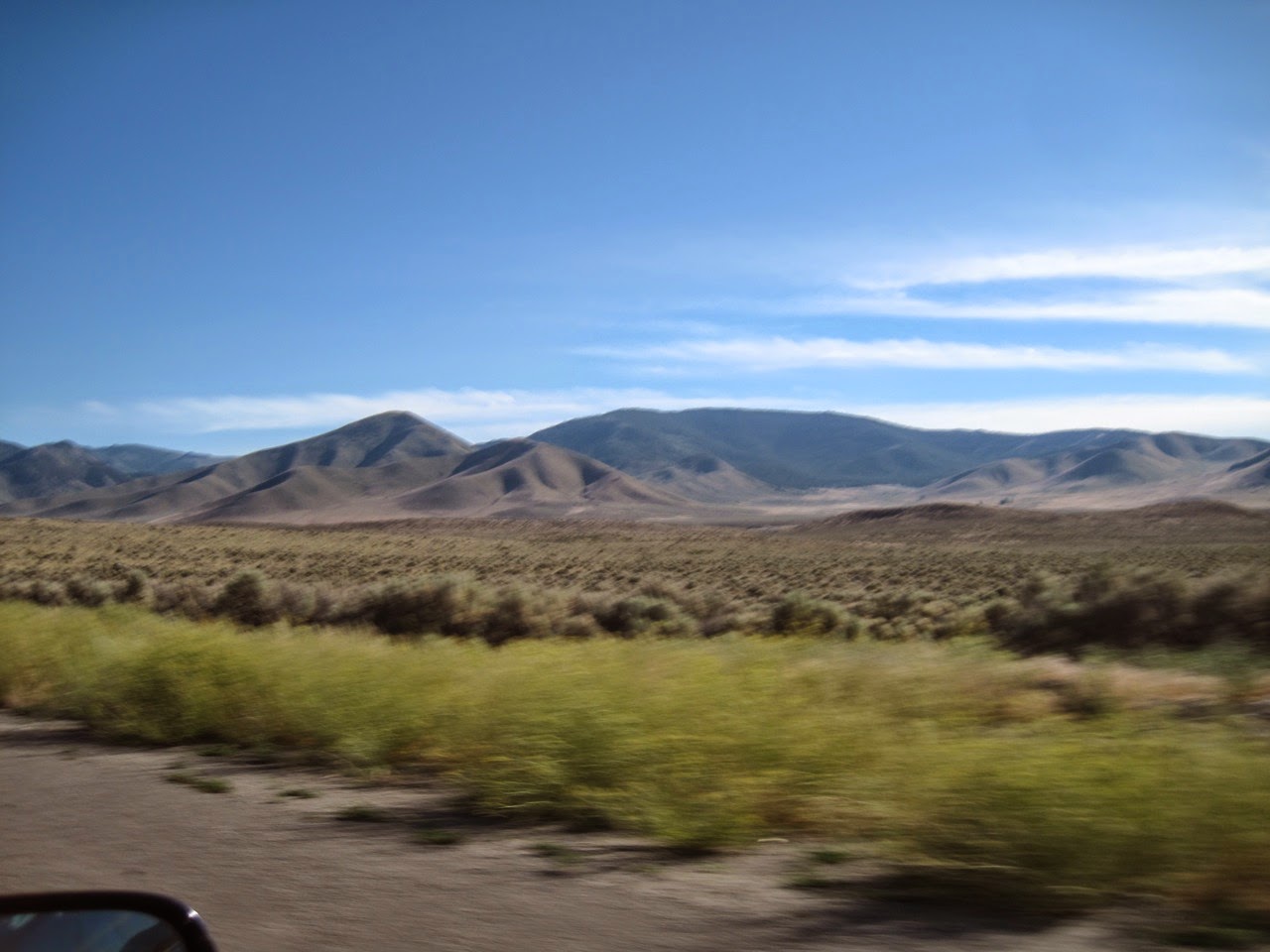 Just outside of Reno where the traffic really flies...I stuck my camera outside the window ( the passenger window of course, I wasn't driving at this point)  and aimed it westward .... we were entering the desert and  the last stop before we turned back toward home.

And thus ends my roll along, hope you've enjoyed the trip. I did.
best wishes!
Jeannette
Posted by Jeannette at 4:38 PM 7 comments:

Book Review: What I Saw in California by Edwin Bryant 1848 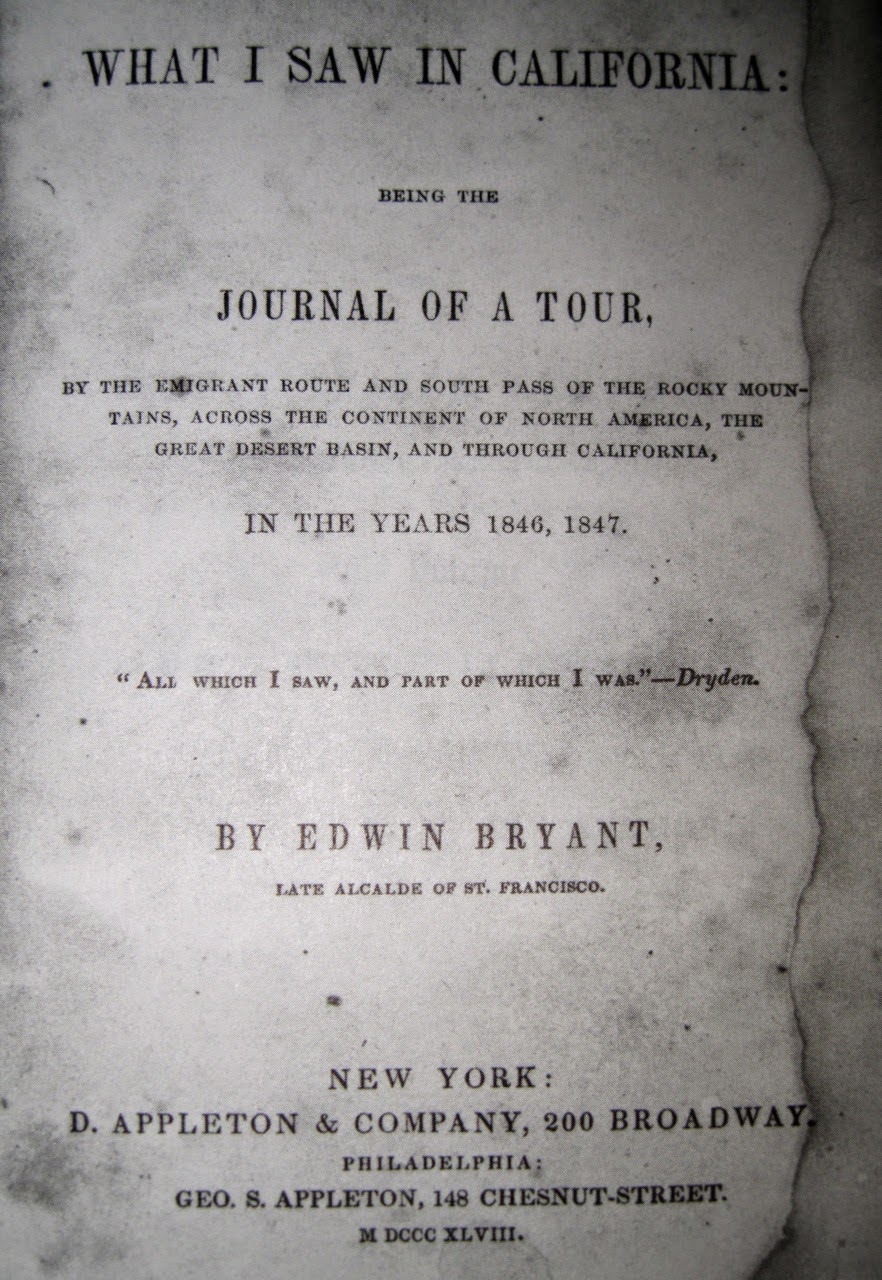 His journey begins  when he leaves his home in Louisville Kentucky on the 18th of April, 1846  and his journal begins when he reaches the town of Independence, Missouri where he will buy a yoke of oxen and  yoke himself up with other travelers set to leave for the west on May 1st, 1846.

It is a real log, as he says, "My design is to give a truthful  and not an exaggerated and fanciful account of the occurrences of the journey, and of the scenery, capabilities and general features of the  countries through which we shall pass, with incidental sketches of the leading characteristics of their populations."(p. 18)

I have enjoyed his documentation greatly.  Without my having to more than imagine the incredible toil,  he took me, with his words, across plains and over mountains, through wet nights on cold ground. He shared the taste of limpid waters, cold springs joyfully found, the comfort of bird song in lonely corridors, the relief of finding grasses rich with nourishment for their animals, and the heft and potential of soils he described as argillaceous ( Yes, I had to look this word up!).

It is June 22nd, 2014 as I write my post.  By the third week of  June in 1846, Bryant's party had already changed out oxen for mules and horses and reached the Platte River in Nebraska where they camp, the night of  summer solstice,  on the river banks  about three miles from a 300 to 500 foot high and mile wide rock formation known as "Chimney Rock"  that has been in their sight all day.  Mr. Bryant thought it looked much like architectural ruins and although he describes it rather well, as he does all the environs, he writes this the following day.

"June 22- The rain poured down in torrents about one o'clock this morning. and the storm continued to rage with much violence for several hours...

If I could I would endeavor to describe to the reader by the use of language, a picture presented this morning at sunrise, just as we were leaving our encampment, among these colossal ruins of nature.  But the essay would be in vain.  No language, except that which is addressed directly to the eye, by the pencil and brush of the artist, can portray even a faint outline of its almost terrific sublimity.  A line of pale and wintry light behind the stupendous ruins, ( as they appeared to the eye,) served to define their innumerable shapes, their colossal grandeur, and their gloomy and mouldering magnificence. Over us and resting upon the summits of these, were the black masses of vapor, whose impending weight appeared ready to fall and crush every thing beneath them...." ( p.103)

I was encouraged by this book as to the value of simple daily writing.  I was reminded of the great efforts many made to come to a land that is so often taken for granted and despoiled rather than appreciated and stewarded as it should be.  And when Edwin Bryant ends his daily scribbling with an estimate of the miles traveled " Distance 10 miles." I  hardly know what to feel.  I am one who can traverse so many miles so quickly and not even feel the wind or weather in my air conditioned car...amazing...and yet...

I intend to next post photographs of a trip we recently made in that car to visit Grandma Beth  then some friends, on to my brother and his wife on their  ranch  near the Oregon border and then, by way of  Mount Lassen Park, east to Reno, Nevada to some aunties. Imagine how many words Edwin Bryant might have dispensed with if he had downloadable pixels at his disposable.  Maybe I will let the wordy Mr. Bryant influence me, and I'll web-log away as the slide show unfolds.  But this review, meant to entice you to a good read, is all for this morn. (Distance...oh, so many miles)