Back in August we laid out our broken dishes on the garden table and began a repair on the bird bath that had both a big edge chip and a crack.  It  would no longer hold water. With summer heat and drought, I like having bird baths for our feathered friends to perch on, drink from and splash in.

Despite our August intentions, a number of intervening realities left those dishes  spread out for several weeks, waiting on the garden picnic table like a Mad Hatter's Tea Party.
Then on the last Saturday of summer, I saw the opening...it was a day of gentle September sun and we were unscheduled. A small backyard project was just the rest we needed.

It was calming, in our somewhat fractured world, to take disparate pieces and fit them into a new coherence, to bring new purpose to objects too damaged for their original purpose, yet too pretty to just throw away.

Mark taught me how to use his wet saw and I made some of the pieces smaller.  I plopped some thinset on the back of each piece, fitted them as shape and color seemed to suggest (and hopefully in a way the birds would like) and smooshed them into place.

It was fun. You can see we have broken a lot of dishes over the years.  I am glad I saved them. As I wiggled pieces around I remembered where or who the plates were from.  One was Mark's grandmother's and one was from my grandma.  My dad gave me some of the plates.  A few I had bought at garage sales to sit under potted plants and two of them were gifts many years ago from a boyfriend; dear people each one and I believe they all felt kindly towards birds as well.

I  did the mosaic by myself, but when it was time to do the grout, Mark helped me...which really means, he did all the work, but it allowed me both to learn and take pictures of the process. 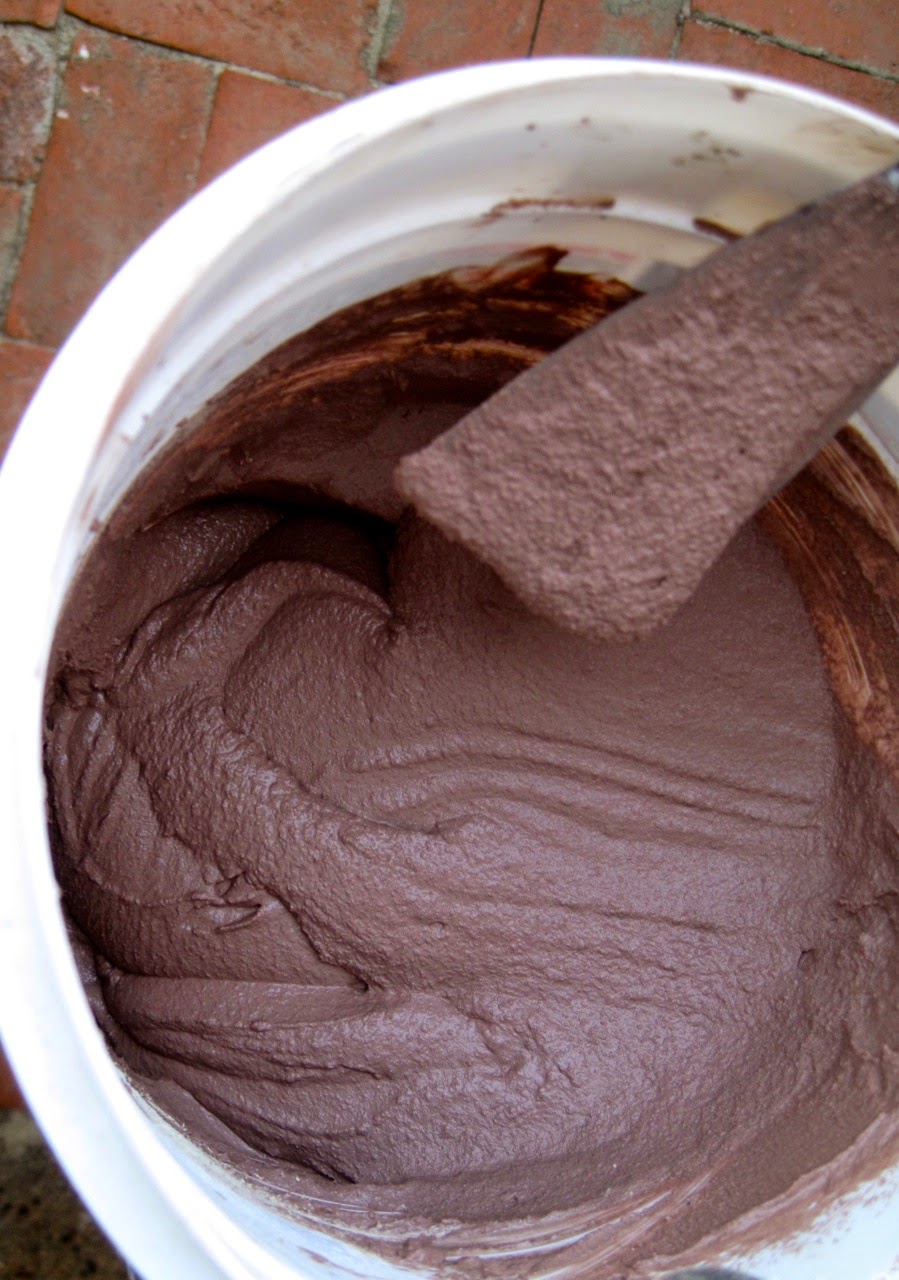 He had white grout, but the bird bath was terra cotta, so we added a little red to match it up better.  You pour the grout into the water in the bucket and mix it up so it is smooth and sticky. 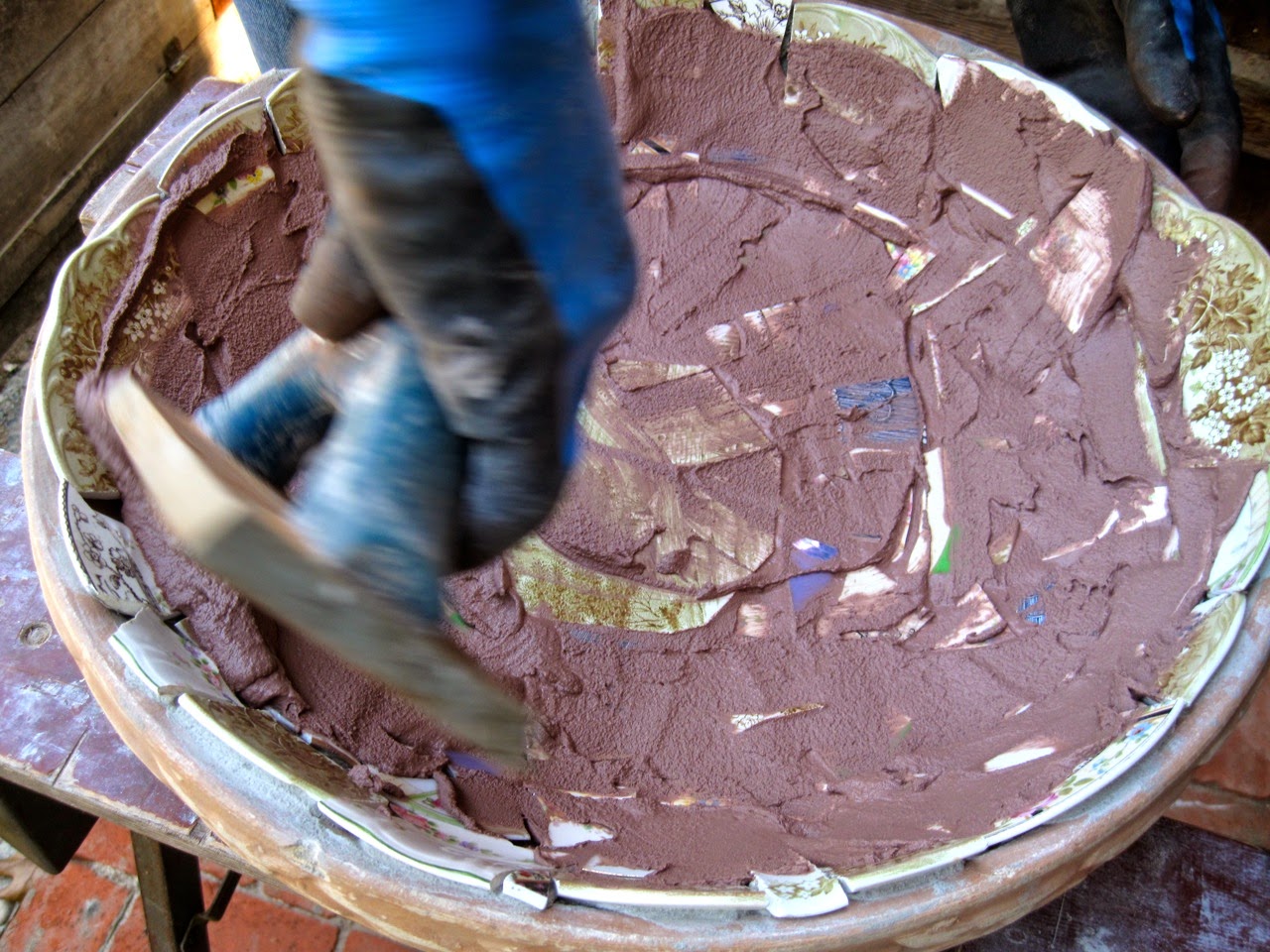 The goal is to spread the grout into all the empty spaces between the broken plates. 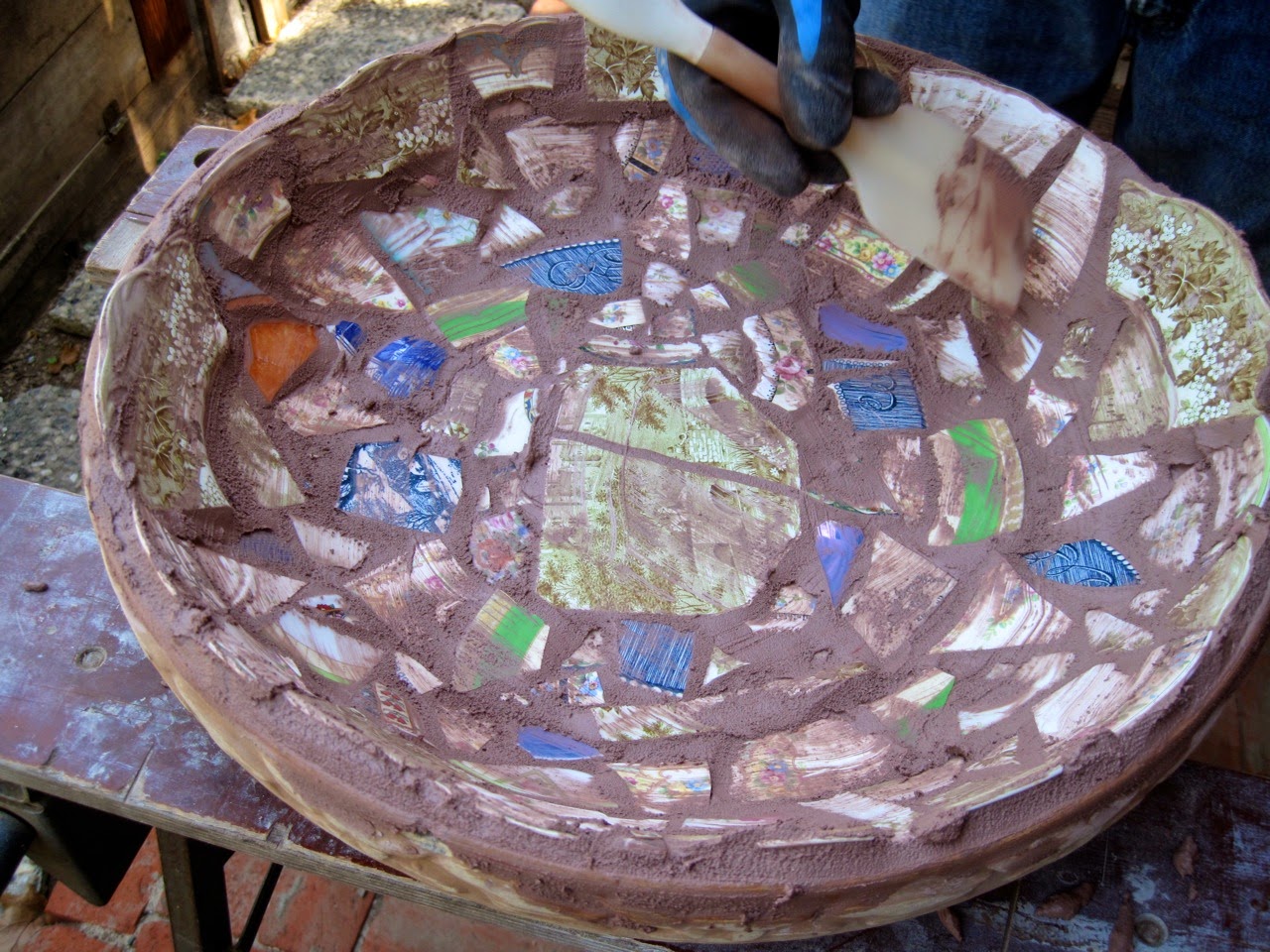 The grout tool he had was designed for larger flat surfaces, so I got one of my kitchen spatulas which worked pretty well. 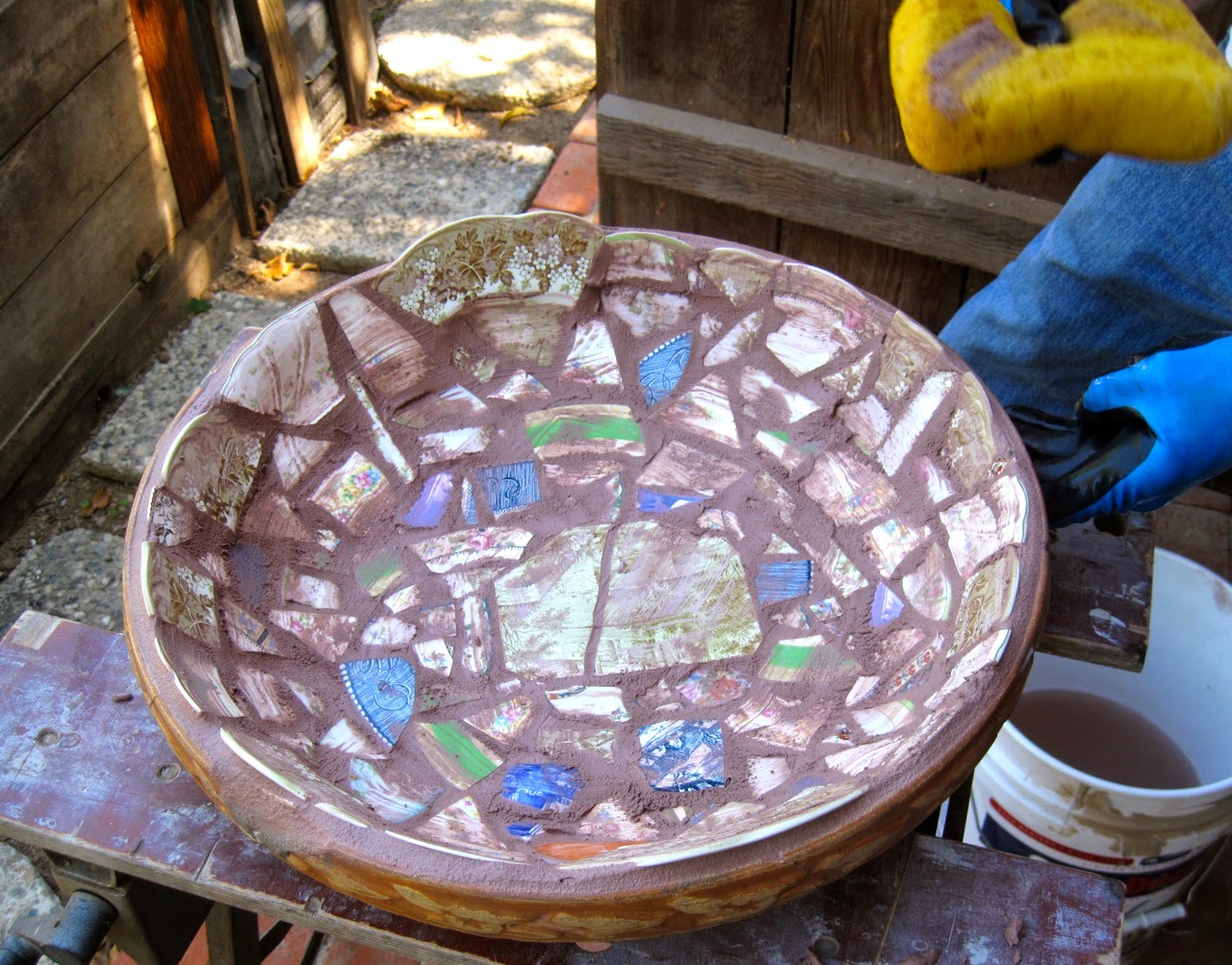 Next step is to sponge the tile or in this case plate surfaces clean with gentle wipings with a very soft wet sponge that you keep rinsing out. 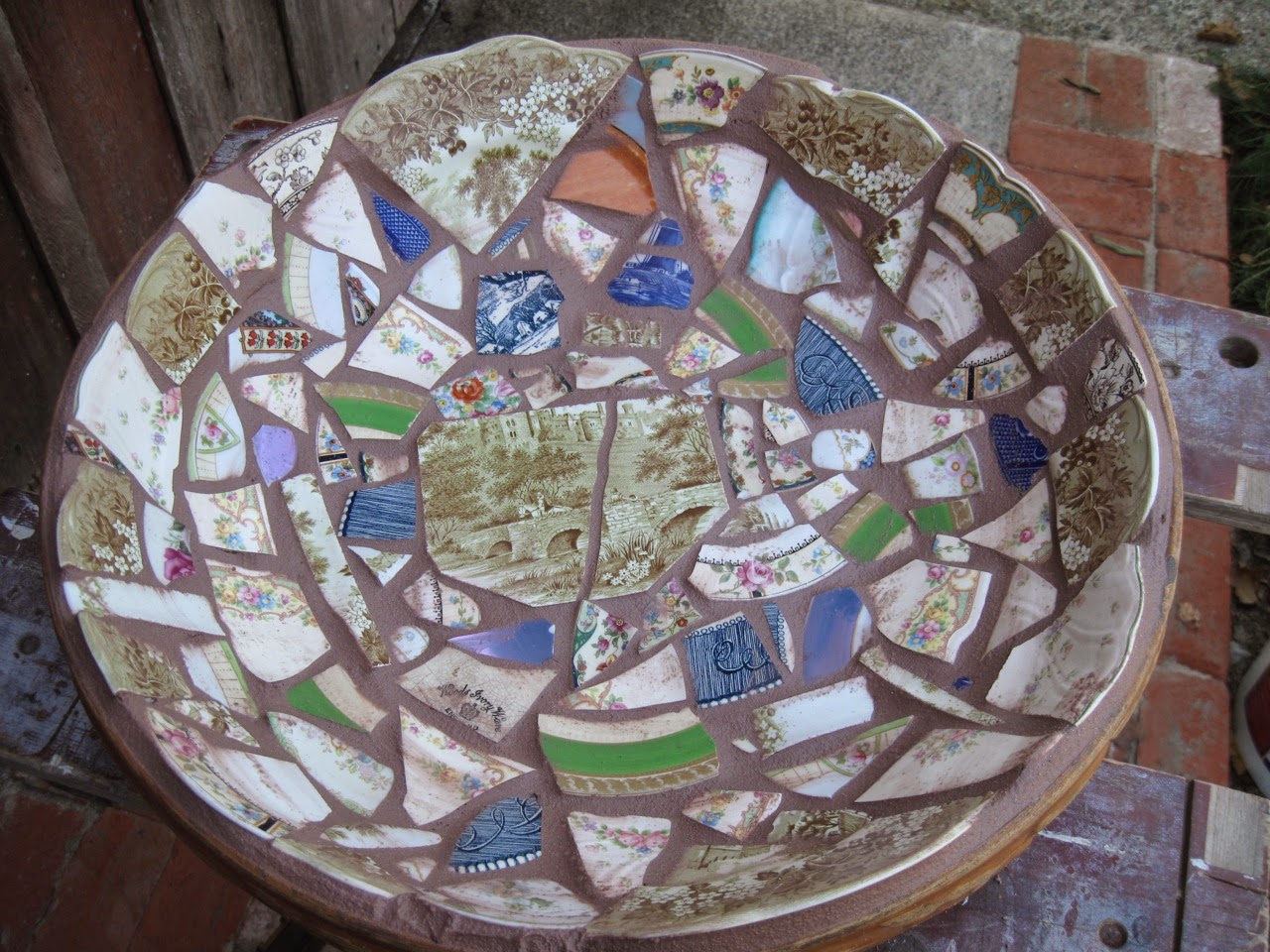 Eventually the grout is confined to the spaces between your pieces and it is time to let it dry and cure. 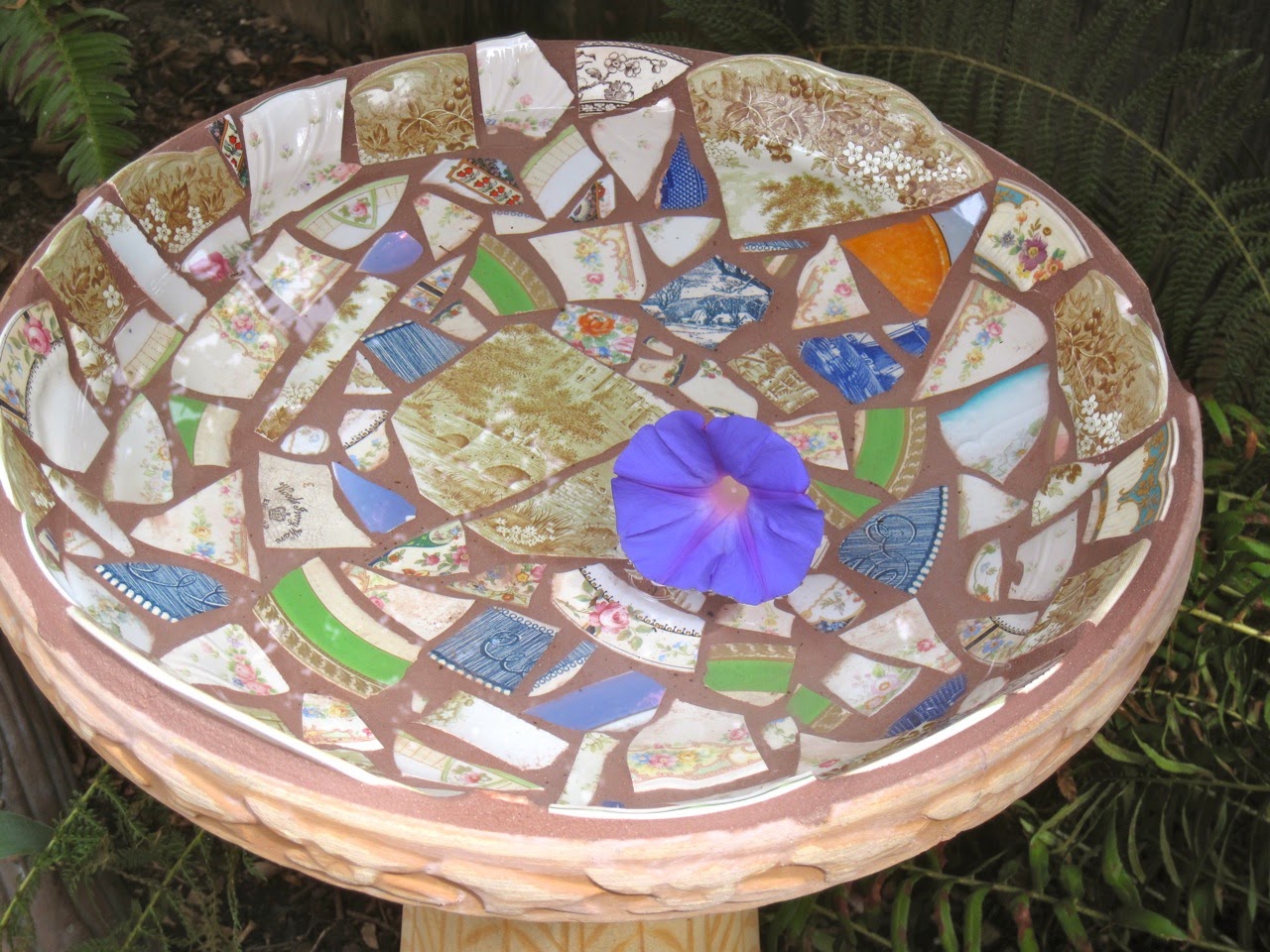 The test now was to be sure it would hold water.  It does. 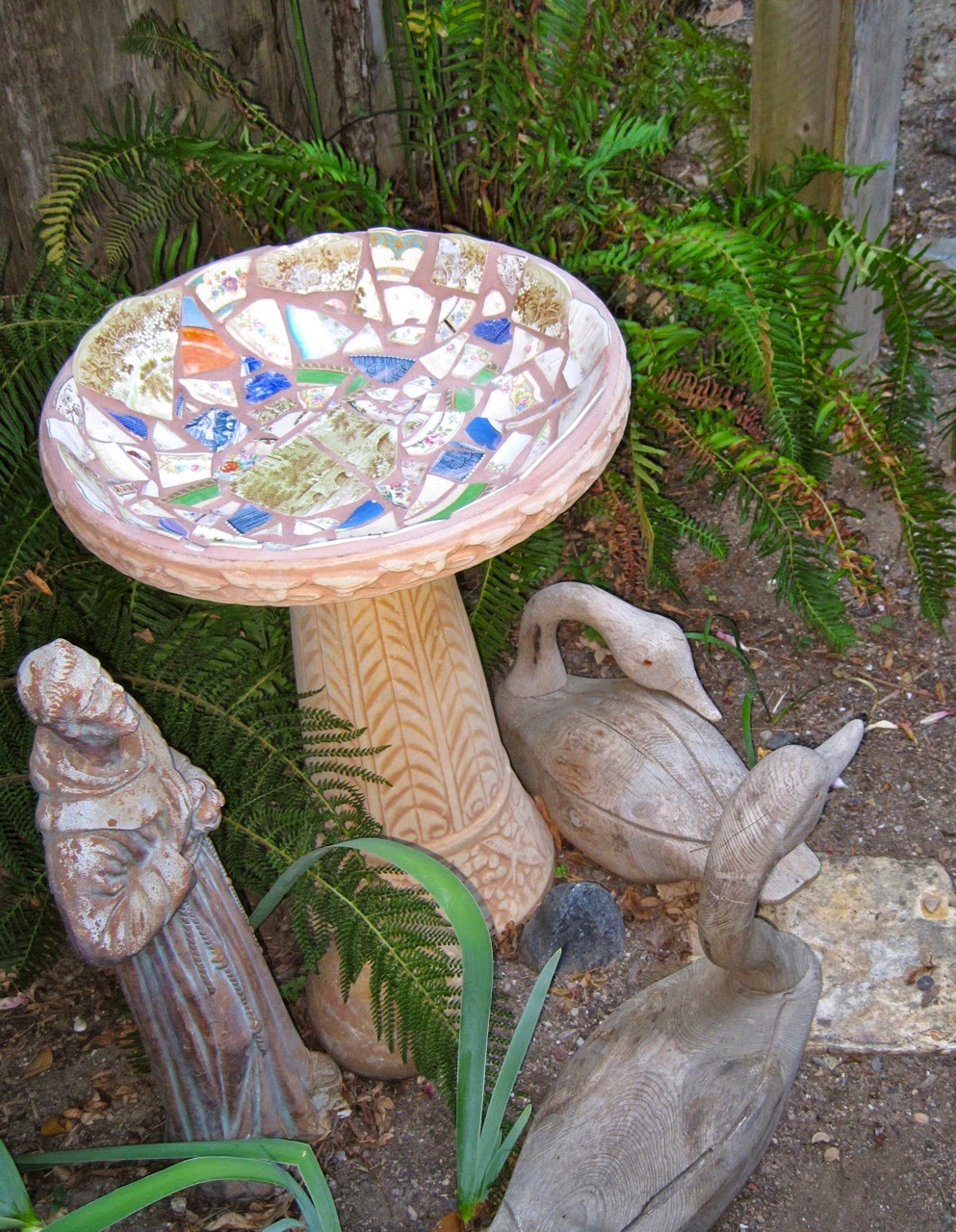 So back it goes on its pedestal...to be filled it up for the birds... 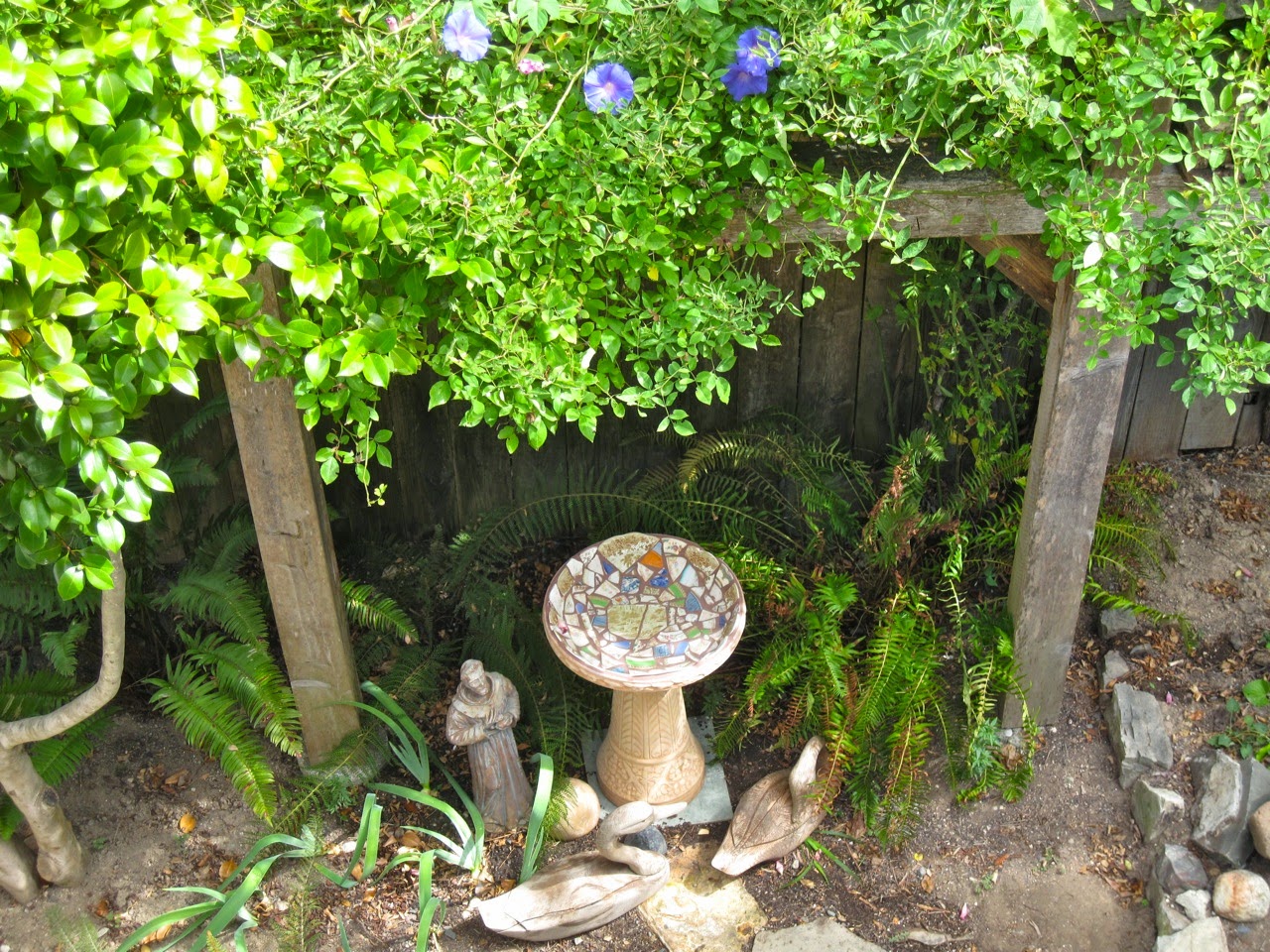 And then you step back in hopes that the birds might come and use it.
Posted by Jeannette at 5:44 PM 9 comments:

Labels: Arts and Crafts, Birds and Animals, Drought, The Garden


It was a gift out of the Pacific Northwest and has helped Northern California firefighters on both the Happy Camp  and  July Complex fires,  as well as the 97,099 acre King Fire in the El Dorado National Forest which is now 78% contained.

I was outside on a covered deck, saw lightning and heard hugh cracking reports of thunder very proximate.  It took me by surprise and so did the scream I cut loose.  When I got back up the stairs and inside during a lull I found my kitties hiding under the bed. I didn't feel so silly then, they were scared too.

I am so grateful for this rain.
Posted by Jeannette at 9:27 AM 3 comments:

Oh my dear California, so dry you have been and beset by fires.

Cal Fire says they have answered at least 1000 more fire calls than usual by this time of year.  The KING fire, that is believed to be arson, started east of Sacramento on September 13th and is only 35 % contained as of today.  It has already hit over 90,000 acres.  Some news reports compare it to cities - it's said to be a wildfire bigger than the entire city of Las Vegas - to help us get a sense of how much terrain that is. There are fires near Yosemite too.  Another dear town that has suffered is Oakhurst.


On August 9th we set out to drive up into northern Idaho to a family wedding and a visit in the new home family had recently made there.  Our planned route to Idaho was up in the air for a few days as the most direct way via Highway 97, off Highway 5 at the town of Weed, was closed for while due to fire.  Fire was already on our minds as my brother's northern California ranch had a front row seat for the "Log Fire,"  one of the several blazes that got started from the July 29th dry lightening strikes.  It came very close, but the ranch itself is unscathed.

Out on Highway 97, the firefighters contained the flames and reopened the road, so we stuck to our original plan to go north to Weed and over on 97 instead of getting ourselves to Reno and then north into Idaho.
That afternoon we stopped to rest and eat a bit in the shade of a tree outside the log cabin 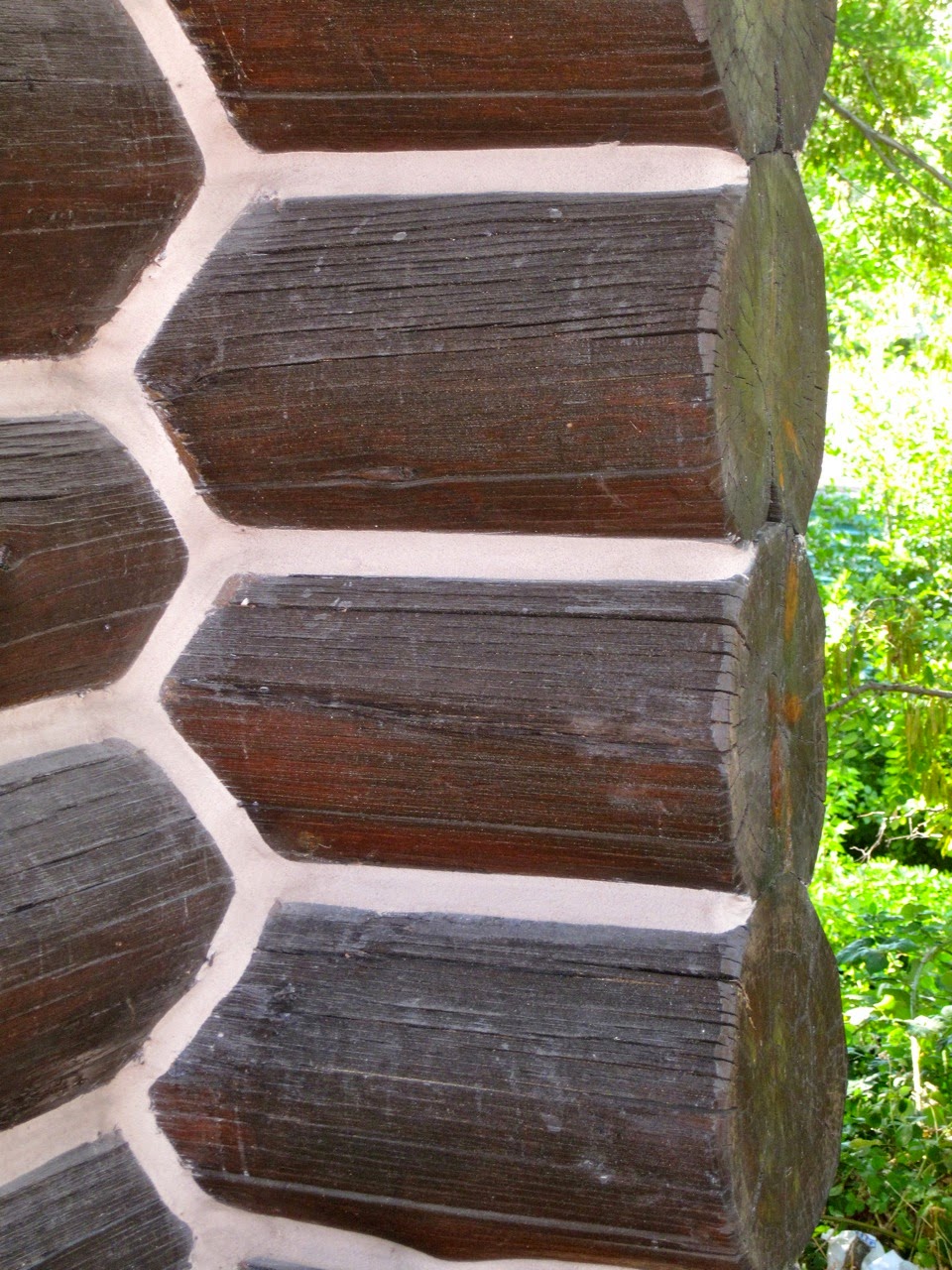 that serves as the Weed, California visitor center.


We had driven past Weed on Highway 5 many times, but never stopped before  We were charmed and heartened by our brief visit. 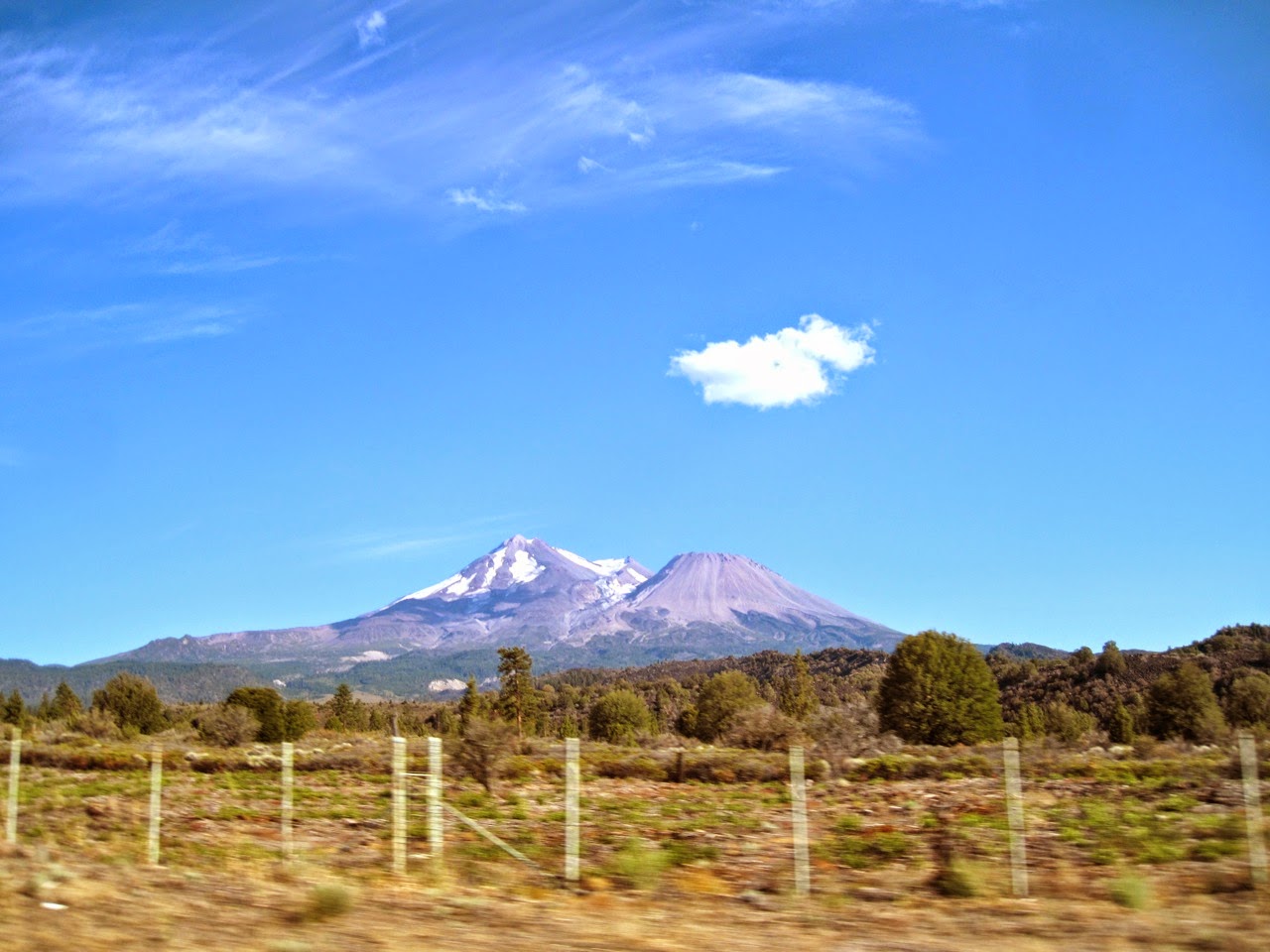 Then we drove on out of Weed, but not without noticing what a fine little town it was. I wish I had taken more pictures. 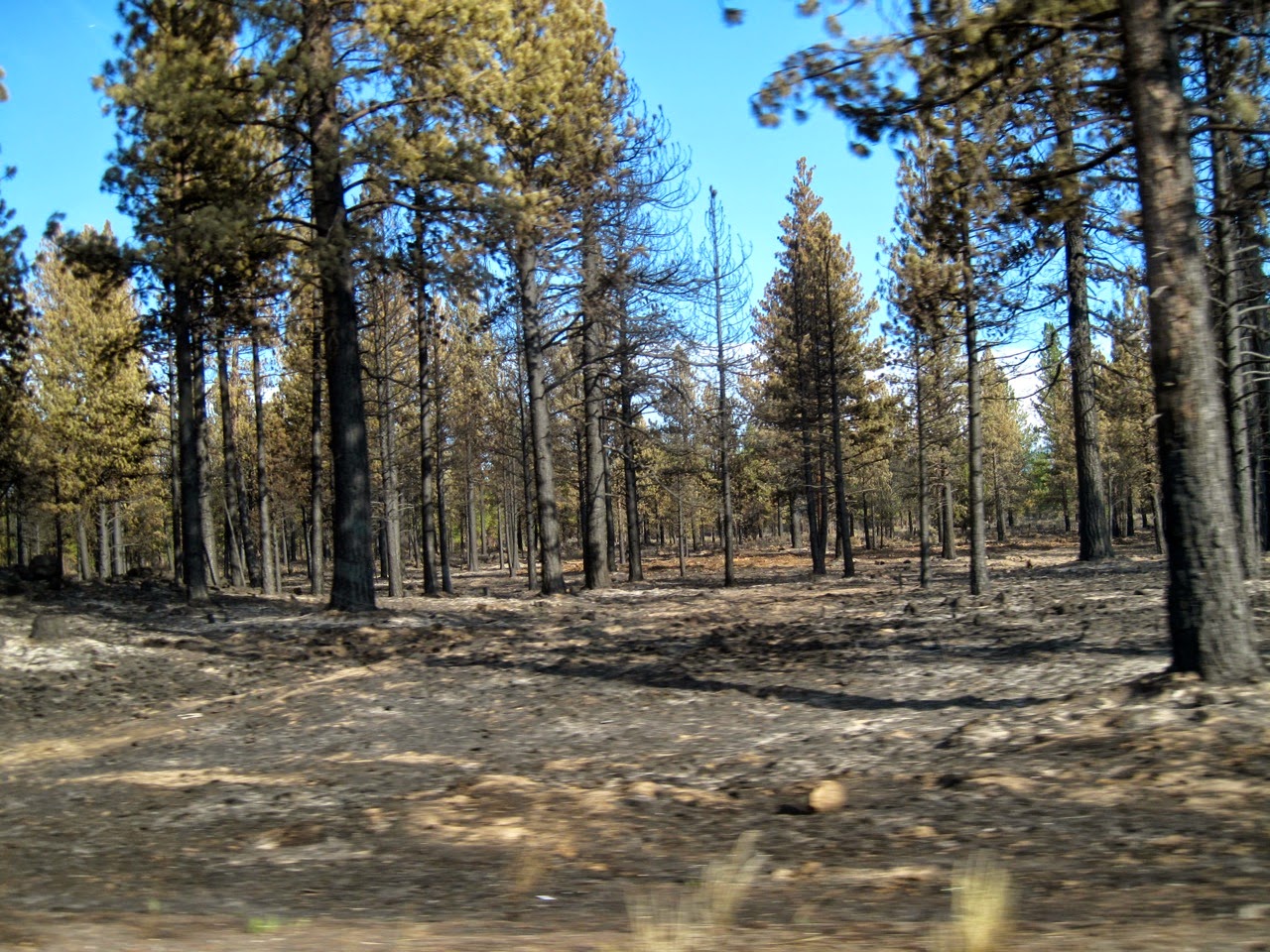 And as we headed out highway 97 we saw that fire had indeed swept through on both sides of the road. 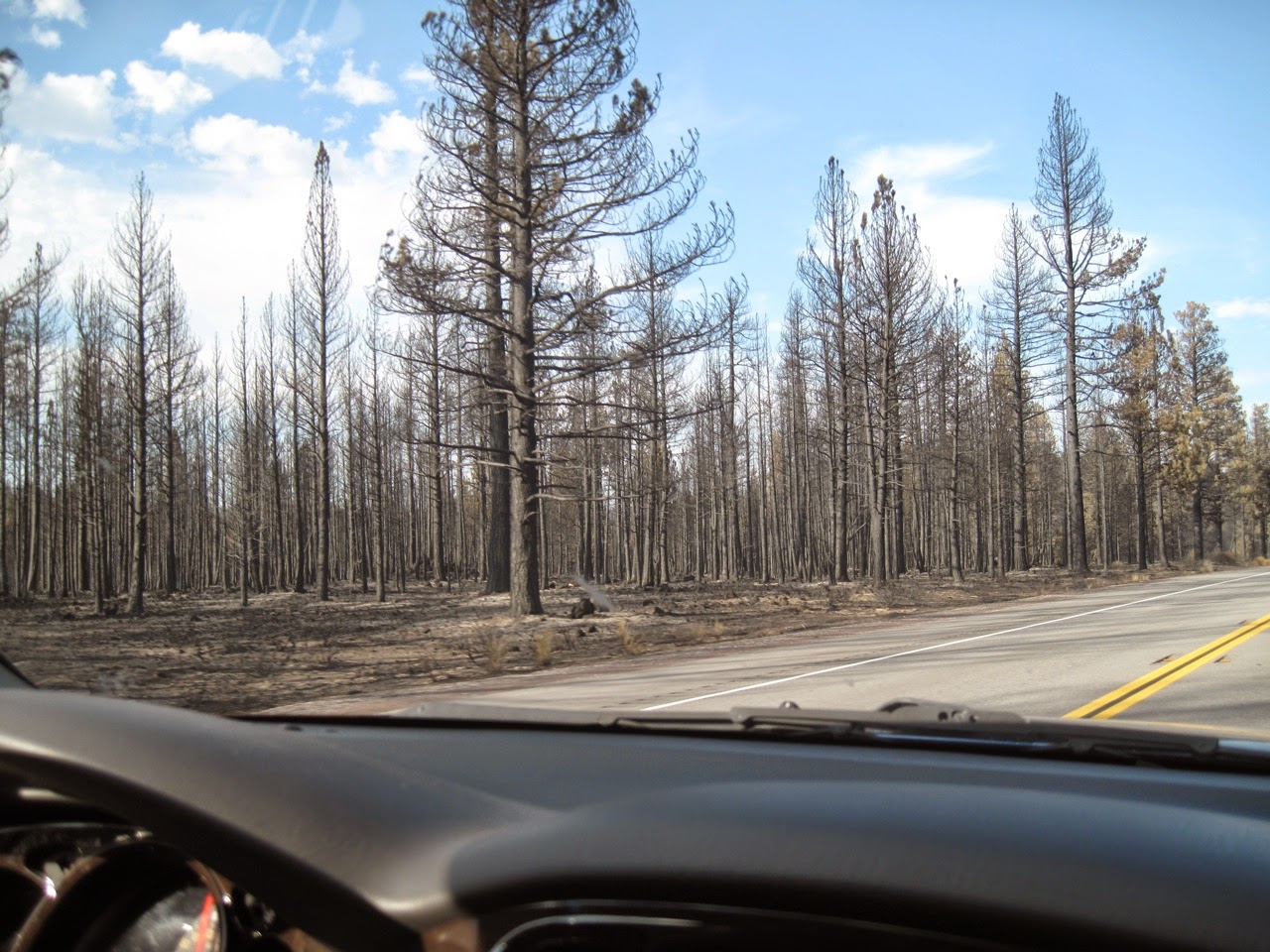 Unfortunately little more than a month later, fire raged through the town of Weed on September 15th and the  town of 3000 took a very large hit.  They called it the Boles Fire.


The people of Weed lost around 150 homes, their community center, their library, and several churches. The town mill was damaged, as was the elementary school.

You can imagine all  the efforts that are being made to rally round those burnt out of their homes...blankets and meals and money and somewhere to stay and the coming alongside with friendship, hope and energy.  It will be a long haul and hard.

Life is full of reminders to count our blessings and check our priorities, isn't it?

I watched a video today on Cal Fire which first began serving in 1885.  I sure feel grateful for those who serve from Oregon to the southern border.  Thank you.
Posted by Jeannette at 10:00 PM 4 comments: