Lavendula who knows who? 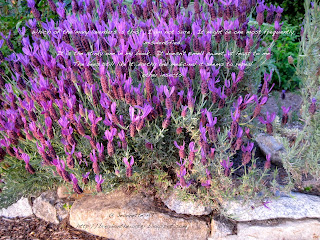 
This type of lavender is not my favorite, in fact  I am not even sure I like this variety.  I think of it as the stinky lavender and never want to bring it inside...but it is in its prime right now and glowing in the light of the setting sun it made me look and reconsider how I begrudge it its spot in the garden.

April 15,2013 UPDATE! Thanks to friend, Harmony, who set me onto the right botanical name and an excellent web site, Mountain Valley Growers,  in her comment below, I  now know not only the name of this particular lavender, but a bit about the confusion about its identity.

Once you know a botanical name  it is much easier to learn about uses and contraindications for plants as well.  I also learned it is more resinous in oils and does not tolerate harsh winters.

According to The Royal Horticultural Society Encyclopedia of Herbs and Their Uses,  L. stoechas is used commercially in air fresheners and insecticides. Flower spikes have been used internally for headaches, irritability, feverish colds and nausea, and externally for wounds, rheumatic pain and as an insect repellent


As I said above on my picture, I know the bees like it but other insects do not and it does not surprise me that it is used in insecticides.  There are places in Australia where it has been declared a noxious weed, apparently given the right conditions, hot, dry, sunny and alkaline soils, it can really take off.

Well it is Monday and time to move along...but I appreciate the help I get learning and I find if I explore something in a little more depth I am much more likely to hang onto at least some of the particulars.  We live in a world that is worthy of being known and appreciated and properly cared for and I am frequently reminded of how easy it is to take things for granted.