A walk in the sun by the water on Thursday afternoon... 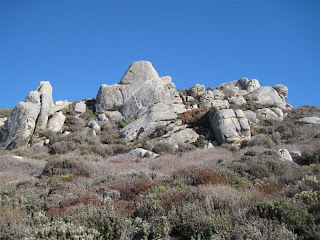 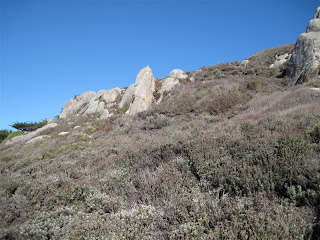 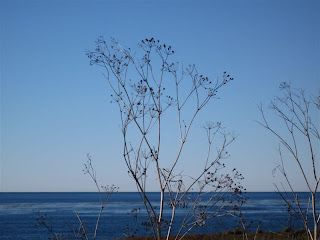 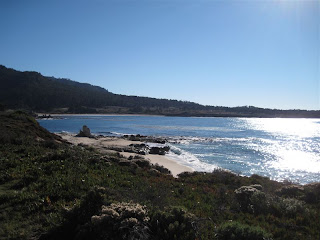 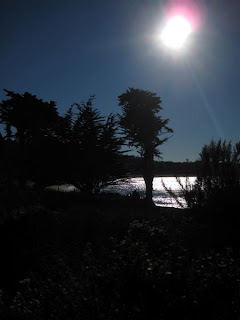 Today the frenzy of  stalking the stores' "big sales" begins for some. I decided it was a good day to recycle all the merchandise catalogs accruing, I don't think I ever asked for any of them.  It felt great.  I had looked at a few of them, briefly beguiled by the bright glossy pictures and so many things not needed and if I could afford  them I should be sending more money to orphans some where in the world. Some photos are so pretty I think of cutting them for collages, but who has that time?
I recently entered the storage unit where things from our home of many years are stored while we live in a small cabin by the sea where we work. It isn't that I have bought  much over the years, but I am sentimental about things from those I have known and loved.  I am thinking that for some things that have no real value, I mean I don't use Grandma's broken honey pot,  maybe I will photograph and save the picture?  After all it is the woman I treasured...not her things.  Still, things are imbued with memory...I am not saying we shouldn't have some keepsakes...but I am sure I could pick a few for each dear person and release the rest.  Part of the problem is that I am the trusted- to -keep- things person in my family....but....okay...will skip that subject for now.
I brought a few books and some cards and correspondance back with me from storage. I have some wonderful California History books  and found one I have never read.  If  The Story of Inyo ,  a 1933 history by W. A. Chalfant about the area of California, south of Bishop and east of Mount Whitney,  is not compelling enough for me to read or use for research I won't keep it any longer, but how will I know if I don't set it next to my bed or desk?  I saw there were boxes of goods that got packed to save when I did not have the time or the mind to look closely enough to see if they truly needed saving.  There are things that I brought with me when I did move that I still haven't sorted  so I will go after a few of those things today.
Use It
Give it Away
Recycle It
And it seems like a great day to muster some creative energy for finishing a project or two.  And I have little a collection of fun things to pop into the mail to some little girls that do have time to play.
So I hope to  release things not needed to increase time and energy for what is important....
You've surely heard that phrase that we are to use things and love people... it is a terrible thing to get that reversed...
Anyway, the sun is out again today and we had a fine walk yesterday and so here are a few pictures to share with you...loveable person.
Posted by Jeannette at 12:44 PM 6 comments:

Do you ever wake up in the middle of the night and wonder if you turned off the.....well, whatever it is that you turned on prior to retiring? 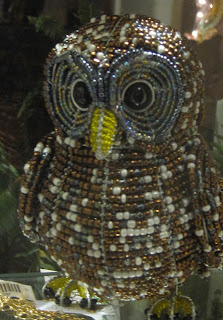 In my case it was a dehumidifier I had set in a closet in the main house.  I suppose the middle of the night is a subjective measurement.  I am talking three in the morning which might not be every one's middle, but it was feeling very middle to me. Once awakened by my dereliction of duty, a retinue of ancillary thoughts qued right up to dance, brightly lit, across the movie screen in the otherwise dark theatre of my now sleepless brain. First I reasoned that there was no real need to get up and stop the machine. It has plenty of capacity, it could winnow and hold several gallons of water; but I had a harder time convincing myself it was wise to leave it running. I imagined touching the electric cord and then the plug and thought of warmth, then heat, then fire. All very unlikely, but surely I should get up and trot on through the garden and the night, make my way to the lonely dehumidifier and shut it down. I was resolved, this was the right course of action, but before I put my feet to the floor, my gallant man awoke and volunteered his services.  I, of course, accepted and even volunteered to go with him, but he said there was no need for us both to get up.
He returned from the task, cheerful and full of praise for the glory of the last hours of the night. The sky was clear, stars visible, the air soft with warmth from the previous day of unseasonable heat. Then the phone rang. Our daughter was to catch an early morning flight to come to see us, but she had been woken with a call that her flight was canceled due to fog.   San Diego faces the same ocean we do; true it is a little further south, but fog enough to ground the plane?  After various communications back and forth and calls to the airlines, it was determined that the flight was reinstated and we, lured by the warm coastal air, decided to abandon our bed, dress and wander out into the very early morning.  After all, our girl was already up and being ferried to the airport by a kind friend, we might as well get ourselves in sync with her.

We thought we'd walk a little but the talk kept returning to where we could find a very early breakfast. We drove past the 24 hour Safeway and headed into the sleeping village by the sea.  As soon as we parked on Ocean Avenue we knew the cock had not yet crowed in Carmel. 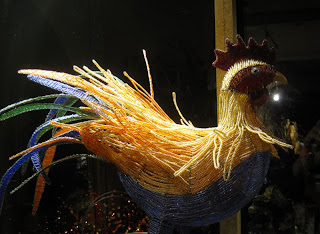 Fantasies of  bakers who rise before dawn and create delectables worthy of every extra calorie that the pastry envelopes, coffee wafting hot and fresh cream chilled to keep the goodness captured...these were the ideas that had really driven us out into the morning.  And then we spotted, out in the dark, the real walkers.  There was a serious woman in a reflective tape vest, her arms pumping as energetically as her legs. Another denizen of the streets appeared ardently talking on her speaker phone as she powered down the middle of the empty traffic lane.  On the path above the beach we saw a small group of walkers with a cadre of dogs in graduated sizes each connected to their mistress by imaginary leashes. The shopkeepers may sleep in but the lean and fit were already on task.
We walked a little, I think, but perhaps it only qualified as strolling.  Two women strode past us, "Look, they are walking lots faster than we are," I said by way of friendly greeting.
"You need to get your hands out of your pockets," I heard in response.
Of course it was my camera I had in there...we sauntered over to one of the bakeries...the window display didn't help our state of mind any.  But we knew that in the long run, we'd grab a few things at the store and 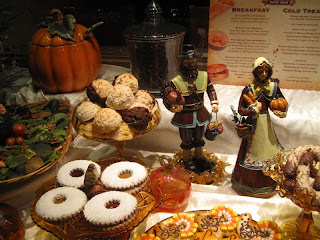 go home and make our own breakfast.
While at the grocery our cell phone rang.  It was our daughter calling to let us know that she had been dropped off at the airport only to learn that  the flight had once again been canceled due to fog... 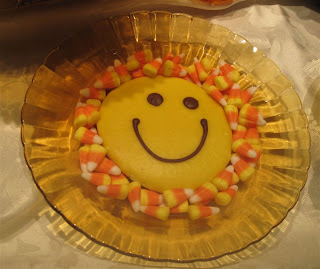 We tried to stay sunny about this...no use getting upset about these things, as long as she is safe. 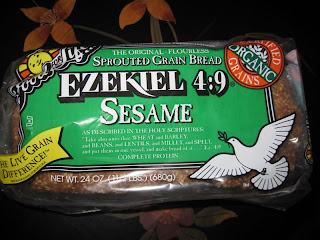 And so we returned  home and ground and pressed our own beans, and toasted our favorite no flour bread.

And while my gallant husband went back to bed I let kitties in and out the door and quieted the dog and downloaded these pictures of  beaded birds and sugary treats and electric flowers in the shops of the little town that won't wake up for hours.   Next flight arriving sometime before nine this evening....a nap may be in order. 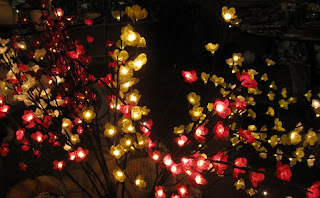 Or wait, is it too late to just go back to bed?
Wednesday morning P. S.
~Last night was a safe and happy landing~
Now tonight we await word of our first daughter's return from  her two month artistic work visit to Austria.
Posted by Jeannette at 9:24 AM 6 comments:

After the First Rain a Gardener's Fancy Turns to Seed 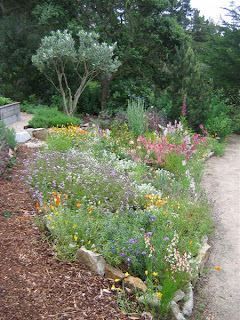 I probably have a better picture of the flowers I got from sprinkling a package of  flower seeds in a little oval bed on a west facing hillside but the flowers are gone now...and  it's time to plant more seeds. 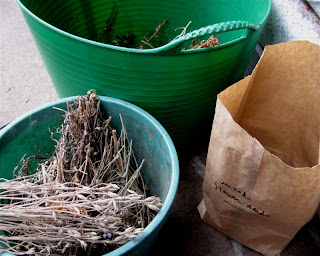 I cut the drying plants and sat and made a big bag of mixed seeds. 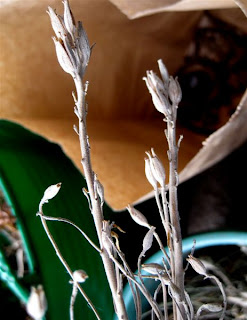 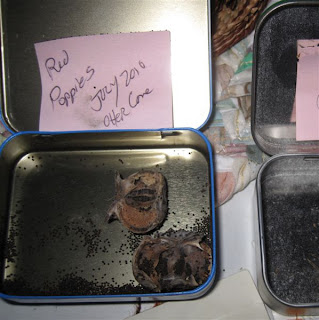 And I remembered a little can of red poppy seeds I gathered this summer. 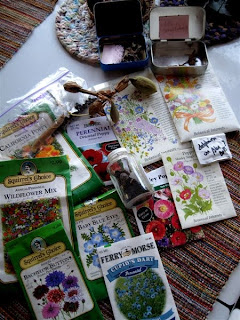 And then I dug out the old packets of things I used partially and bags, jars and tins of seeds I've gathered here and there... 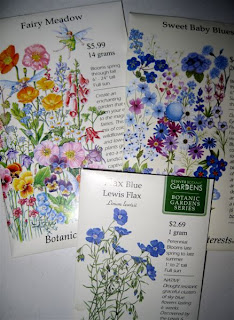 but that didn't stop me from  getting some new seed packets too... 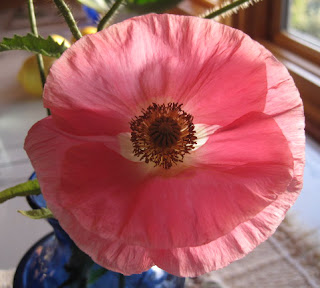 So here's hoping they germinate happily in the few spots of sun I can give them
and that there will  be more flowers ablooming next year...
Posted by Jeannette at 2:59 PM 3 comments: