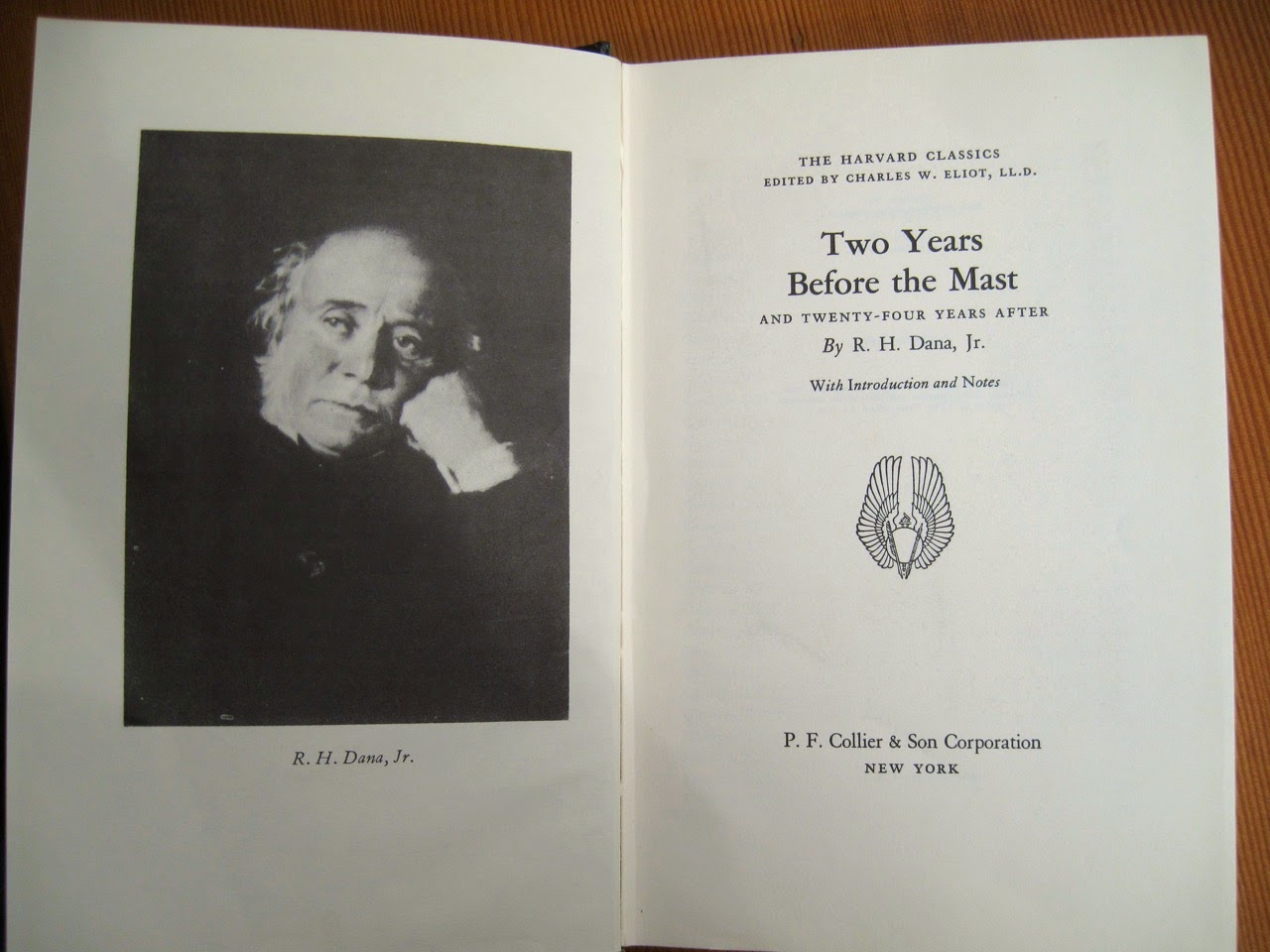 To read a classic such as

Two Years Before the Mast

by Richard Henry Dana Jr. and not share a little about it seems selfish.  If one finds a treasure, why not share it?

I have been trying to be a bit more generous about reflecting on books I have truly enjoyed.

It's tempting to dive right into another book,  but I know my good intentions to write up at least an encouraging note for others to consider the merit of this book would then more easily be derailed.  I know that it's more likely to happen the sooner I try to distill my thoughts and before I'm too far immersed in another tome.

I have only moments this morning,  but I will leave this opener here for myself  as a magnet to draw me back to write a bit more on Dana's tale of shipping out of Boston  'round the Horn to California in the year 1835.

A student at Harvard, Dana's eyesight suffered from a case of Measles,  so he took leave of intense studies and rather than voyage as a passenger, he signed on a merchant ship as a common seaman.

The change from the tight dress coat, silk cap and kid gloves of an undergraduate at Cambridge, to the loose duck trousers, checked shirt and tarpaulin hat of a sailor, though somewhat of a transformation, was soon made, and I supposed that I should pass very well as a jack tar.  But it is impossible to deceive the practiced eye in these matters; and while I supposed myself to be looking as salt as Neptune himself, I was, no doubt, known for a landsman by everyone on board, as soon as I hove in sight. ( page 2- The Harvard Classic Registered Edition)


He  kept a daily brief diary of his experience and when able also wrote out his experiences at more length in a different journal.  His sea chest, where he kept his more extensive writings,  was lost upon his return to Boston. Happily for posterity, while back at law school, he rewrote his narrative from the framework of the daily log which he had  kept with him.

His determination inspires me.


(Sunday, March 22nd)
Before I go on,  I admit that not only did I not discipline my free time to write on Dana this last week, I read a Pushkin story,  "The Captain's Daughter."  Pushkin was born in Moscow in 1799 to an old noble family.  Pushkin was sixteen years old when Dana was born in Cambridge, Massachusetts to a family who had distinguished themselves in young America, so my excursion into Alexander Pushkin's tale of a young man coming of age in a remote military outpost was not totally removed in time from Dana's true tale.  Each story is told in a young man's narrative voice as struggles with self, nature, and the shifting hierarchies of mankind are faced and both  men esteemed honor and purpose.

This was my first reading of  Two Years before the Mast from cover to cover.  I was familiar with excerpts of it from my studies at University of California at Berkeley when obtaining  an undergraduate degree in American Studies.  I was reminded of it again several years ago as my eye doctor, as has been true of many an oculist over the years, used  passages from Dana's journal to test acuity of vision. In other readings of histories of the peopling of the West, quotes and commendations of Dana's work finally spurred me to read him in full.

Thus far, I realize I have primarily documented that I am often slow to pursue challenges, but this is, after all, my web log so I might as well tell the truth.

( Tuesday March 24th)
Dana was acutely touched by the day to day dangers and difficulties faced by seamen and profoundly touched by an unjust flogging he witnessed.   He vowed that if he were ever in a position to be a help to them, he would be.  His desire for equity and justice inspired his writing.  He noted that while there were already masterful of tales of sea voyages, "a voice from the forecastle has not yet been heard."

Dana has such fine powers of description in his clean prose that I was glad to travel over the seas with him, but I was even more pleased when the brig Pilgrim docked in ports I know and love.  Have you ever been to San Diego, San Pedro, Santa Barbara, Monterey, or Yerba Buena,  San Francisco?
Dana spends long periods of time on shore. It isn't an all "...aloft to furl the sail..." story.  One of the striking aspects of Dana's recollections of California in 1835-36 is how brief the lifestyle he encountered on the coast of California was to be.  He saw California and met many of her inhabitants and visitors before the 1849 Gold Rush and huge influx of overland migrants.

There are three basic editions of  Two Years Before the Mast.


1.The original 1840 edition.
2. The 1869 edition - this is a revision by Dana when the copyright reverts back to him. He removed  the "sharply unromantic opening paragraphs" and the final chapter and he added a new chapter "Twenty Fours Years After."
3. The 1911 edition - prepared by his son Richard Henry Dana based upon the 1869 edition. His son adds research about the Crew, and a Dictionary of Nautical Terms based on Dana's "The Seaman's Friend" as well as an Introduction and a new chapter "Seventy Five Years After."

The book is available online from Project Gutenberg.


(Wednesday, March 25th)
The edition I read included  "Twenty-four Years After" where Dana revisits California.
How often do we see our own place and time in the world and not realize how fast it is changing?
When I look back through my own private journals I see notes I have made of national and international events which I have almost forgotten about in the rush of new developments, yet the impact of those events and changes is deeply shaping today and the future.

One of the sentiments Dana expressed that I found very powerful is that while social troubles need attention, the changes needed are not always the ones brought about by  the exertion of more control or the enactment of more laws.


I know that there are many men who, when a few cases of great hardship occur, and it is evident that there is an evil somewhere, think that some arrangement must be made, some law passed, or some society got up, to set all right at once.  On this subject there can be no call for any such movement; on the contrary, I fully believe that any public and strong action would do harm, and that we must be satisfied to labor in the less easy and less exciting task of gradual improvement, and abide the issues of things working slowly together for good. ( page 361- The Harvard Classic Registered Edition)


There was one regret I experienced in reading this book, for there was a passage where I wished Dana had not been so focused. In his final chapter he begins to describe his  excursions to various parts of the state, traveling in coaches, in boats, and  on horseback as he radiates out from San Francisco into the interior, to Santa Clara and San  Jose,  up the San Joaquin river,  crossing the Tuolumne, Stanislaus and the Merced, to Mariposa, the big trees, and as he called it, Yo Semite Valley. He is briefly in full descriptive force and then he writes:


These visits were so full of interest, with grandeurs and humors of all sorts, that I am strongly tempted to describe them.  But I remember that I am not to write a journal of a visit over the new California, but to sketch briefly the contrasts with  the old spots of 1835-6, and I forbear. ( page 392- The Harvard Classic Registered Edition)


I hope I have conveyed enough enthusiasm about this classic to tempt you to add it to your reading list.
with best wishes,
Jeannette

A Springtime Project I Didn't Plan

What a funny title for me to post...as if I plan everything out so carefully and fulfill those specifications with well timed regularity. 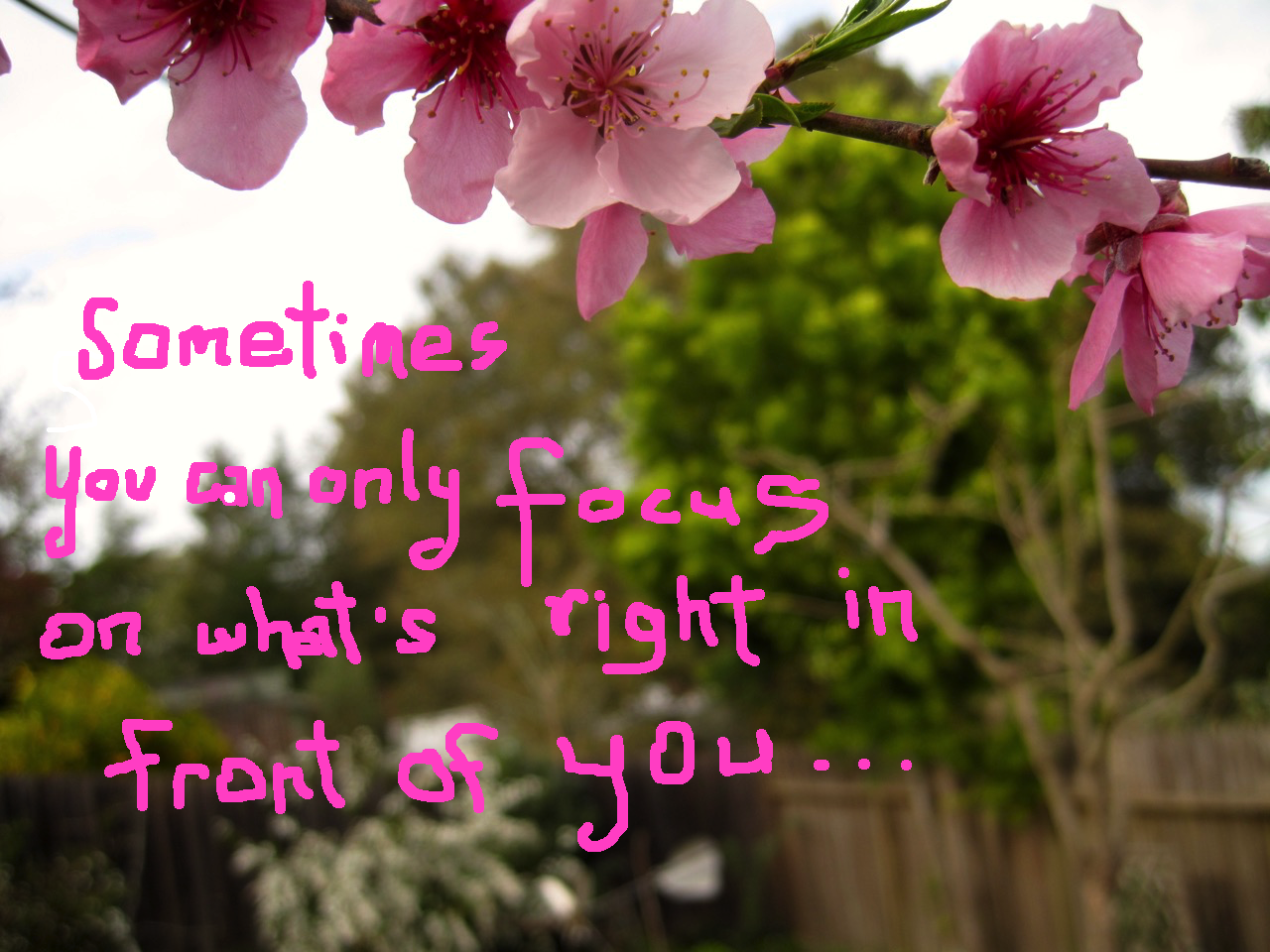 From sea to shining sea I suspect no one was planning on quite the weather that has been going on.  In California it is a dry and early spring, though today there were some sprinkles.  I have read reports and heard tales of snow aplenty and lots of troubles in other regions.  We've got peach blossoms and a drought to face.

But it isn't weather that is rearranging the calendar of my current intentions, it is a health need.
Sometimes it is  hard to get lined up with life having its own way.  We have our ways of insulating ourselves from the facts of life. Other times the mandates given leave little to no room for choice.  I think of a particular friend who has been given a very fast introduction to how fleeting life is.  He does still have choice, of course, for he and she who loves him, are choosing to face each day's troubles with faith. It takes courage.

So what do I want to share here? I'm being given some healing treatments that take a fairly large commitment to complete.  I don't want to do the math on five afternoons a week for 60 treatments,but I believe it will take me pretty close to summer.   I have to fence a bit with myself, to get into the right stance, to really take it on in a spirit of gratitude.

When I got back today from my two hours in a closed chamber I ran to the back yard to look and see if the peach tree was still lovely.  Everything passes and changes so quickly in spring.  Maybe relinquishing this spring to needs of my body will quicken my sense of how precious time is...maybe I will be more productive, less wasteful, of the fragile precious commodity...life.