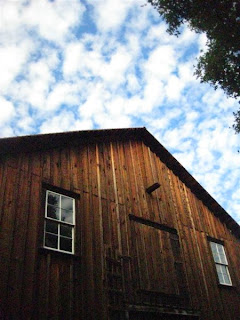 In Monterey at one of the downtown historic state parks, Cooper Molero,
the barn and the sky prompted me to pull out a camera.
Later in Pacific Grove.... 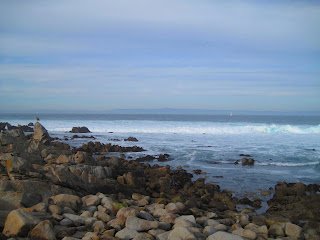 January sunshine lit the distant sails of a small boat . 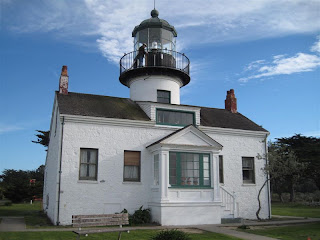 Since February 1, 1855, the Point Pinos Lighthouse has flashed its beacon nightly to guide ships off the  rocky coasts. 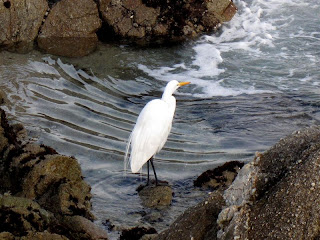 To complicate matters, when Little Blue Herons are immature they are also white with black bills but they have yellow facial skin at the base of their bills and their legs are black in the front and yellow in the back... Seriously, confusions are easy to come by, I am not making this up.

I don't need to know  "who" the bird is for my heart to leap, but  the beauty of creation does deserve to be appreciated in all its details. And it seems  good  to me and for me to pay attention  and to exercise and double check my ability to retain and retrieve information details. 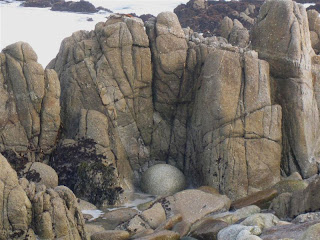 Sometimes rocks proclaim their distinctiveness too... 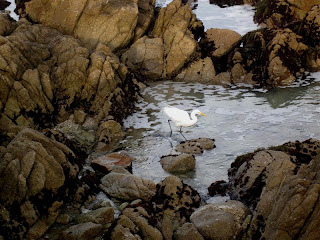 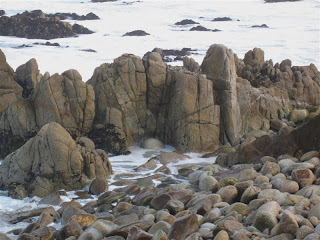 Even at a distance...this smooth round stone stands out.
The waves washed in and it would disappear...and  as each wave subsided
I saw it again and marveled anew.
Posted by Jeannette at 11:04 PM 13 comments:

The Hills Above Mal Paso 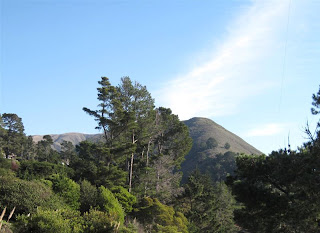 There must be a story  why the road is named Mal Paso. Perhaps some dark and dreary things took place to early travelers or settlers... 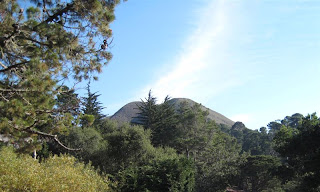 Or perhaps it was named by someone struggling with the steep ascent up from the ocean... 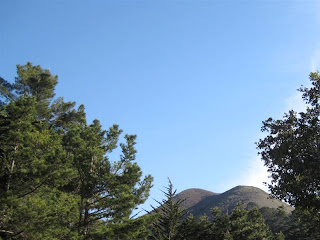 Or maybe it is very literal, after all the road does not go all the way through to the east...Maybe it should be called  No Paso...but it was just the walk I needed...to be startled by beautiful flowers ... 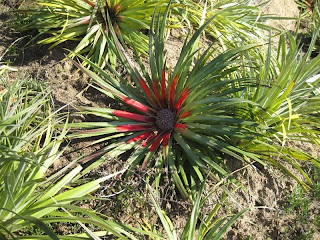 I had not seen these bloom before ...I thought someone had perhaps had a can of spray paint...but no 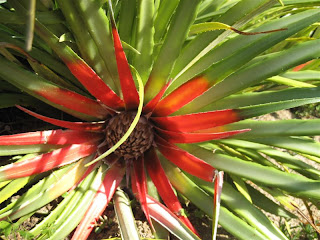 this is now they grow and bloom...undoubtedly in the giant aloe family. 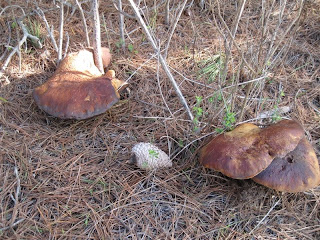 And these fungi, at least eight inches across, they also caught my eye.  It  was comforting to see them  popping out of the earth, just as they should be when conditions are right.
To walk, to hear birds, to watch the clouds, to stop and listen to the mushrooms and the pine needles...
to feel the pace of earth time, is healing. 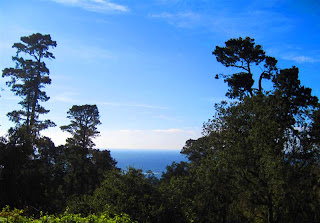 Senseless acts, vicious, cruel acts,  take place in our beautiful world....Whether  you and I  are thinking of the same senseless acts
doesn't matter...there are more than enough to go around.  Even on the extreme periphery  we become a witness...and it can stun us...and rob in reverberating circles ...but perhaps we should lean into the good and beautiful all the further... 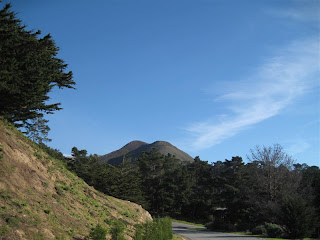 Yes....let me show you the lovely little mountains from one more angle...

New Year's Day On the Rocks

I opened the door on New Year's Day and saw a rainbow across the waters.  I called to Mark and he grabbed his camera and captured the colors.  I was content to have seen the pale colors shimmering in the morning air.  I never feel like my pictures do justice to what is before me...but then they remind me, and I hope you too, of the glory that is if we stop long enough to  see.
I did take some pictures walking about after  a late breakfast. 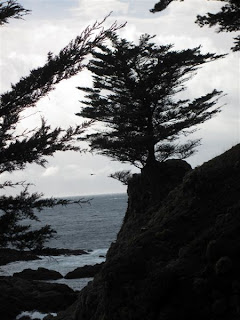 looking out through the walls of the southern cove 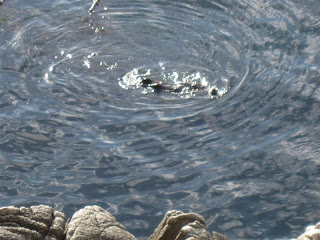 I'm always happy to spot an otter. Sometimes there are weeks when I don't see any, but lately they've been visiting the southern cove.  December 30th we had turbulent waves and I watched two otters diving for dinner.   New Year's Day, at low tide, the cove was calm and before I saw a tell -tale shape in the waters, I heard a crack, crack crack, echoing across the cove and then saw an otter cracking open a shell on his chest as he lay on his back.    After lunch I think he took a nap which they also do on their backs. 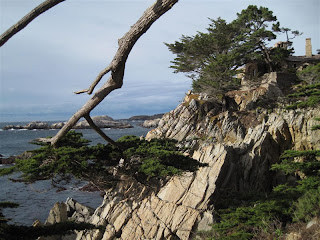 Add to this pretty view the sounds of birds and water and wind and the smells of trees and salt and earth. 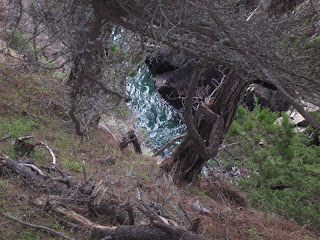 The colors of blue, the scattering of light..waves of light...the shorter waves of light...
That is ocean water straight below me in a very narrow inlet cove.  I was only able to see this color from this angle. The color stopped me short on the steep cliff.  I'm glad my snapshot captured what I could see. 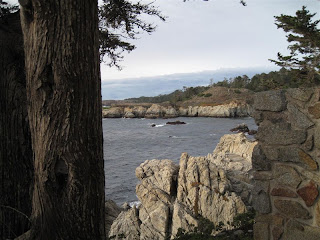 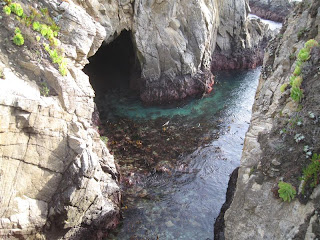 point and shoot untouched photograph...colors of the day 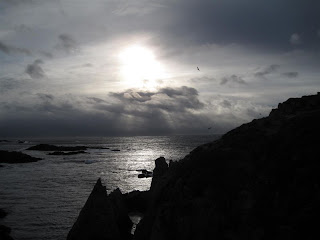 As I took this picture my camera battery light began blinking... but I myself felt all recharged.
I hope you feel recharged in the New Year and that we may each do our part in making  the most of 2011.
Rather than make any new resolutions... I  am reminded of the daily need to rein myself in, and steady my aim on unchanging requirements.
~seek justice, love mercy, walk humbly~
from Micah 6:8
"He has shown you , O man,
what is good.
And what does the Lord
require of you?
To act justly and to love
mercy
and to walk humbly with your God."
HAPPY NEW YEAR 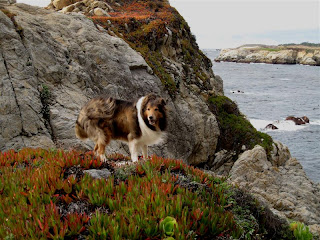 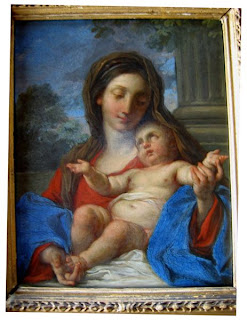