A Much Appreciated Rock

Recently I sent off a photo of this rock to an artist who had painted it after a visit here several years ago.
She captured the rock  in one of its manifestations beautifully.  I mentioned to her that the rock and all the vegetation around it  has changed significantly since she had seen it and she asked me to send her another picture.  I took this one last week for her and then today I wandered around in my some- day-they'll- be- organized photographs and found a few more photos of this narrow rock  island in the southern cove.

Rocks, substantial as they are,  change.  Over the last seven years I have watched the wearing down of this crop which sits centered in a tight cove with ocean lapping on both sides.  Tenacious cypress seedlings had worked their roots into fissures in the rock, growing, but miniature versions of the parent tree well rooted in soil on the cliffs above the cove.  Elemental forces, the winds, the rains, the crashing salty waves, the tremors of the earth and the roots of stunted trees  erode and weaken rock...and whatever strata is loosened or dislodged eventually slides and tumbles into the sea.


One of its faces of beauty was well captured by artist Sunee Jines.


I have been captured seven years on these cliffs of beauty ever changing. Now a season of change is upon us, and we will soon part company with the rocks of these coves.  I have a trove of photos and memories, some already shared in posts in this blog, but I look forward to more exploring while I gladly carry an inner cache of much appreciated rocks and waters.

Kitty in a Basket

It is really kitty in two baskets... 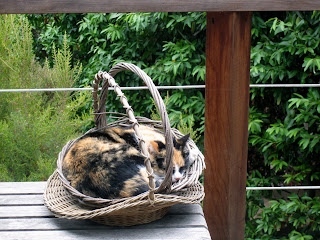 I had just stacked one flower basket inside the other and set them down  and Phoebe soon found them just in time for a nap.  There's a lot I could learn from this girl.

Every Man...a Piece of the Continent

A few years back we hired an artist and a mason to fix two of the fireplaces in our employer's stone house on the cliffs above the ocean.

Steve Gally was a friendly and very Central Coast independent kind of a guy whose talk was fast and far ranging, he was interested in the natural world and how to work with and in it, his community and people in general. He got to work when he got here and then he worked hard. He was so hyper-amped, so  excited about everything and so wanted to share, that I found myself somewhat overwhelmed by the boom of his presence, yet I always found him to have the best intentions. 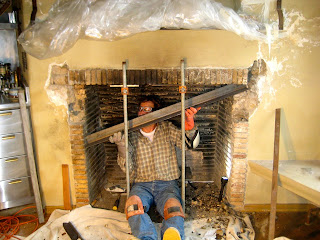 After the job was over, he would stop by randomly with some  honey from his bees, or old veggies from the health food store that he would get for his chickens.  When he  ran into us in town he'd treat us as if we were long lost  and blurted out one day that even though we'd been customers, we were different...we were "like friends."


He told us both, more than once, that if  we ever needed any help, ever, ever, any time, to call him.

He had recently stopped by to invite us to walk with him on a ranch south of us.  He said he would be going by at least once a week  and we could come along anytime.  We looked forward to that, but that date won't  happen. We just learned that, Steve, 62 years old, died suddenly on  July 16th of natural causes at home in the garden sanctuary he was building with and for his lady, Jennifer. 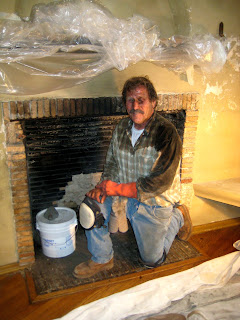 No man is an island,  entire of itself; every man is a piece of the continent, a part of the main; if a clod be washed away by the sea, Europe is the less, as well as if a promontory were, as well as if a manor of thy friend's or of thine own were;  any man's death diminishes me, because I am involved in mankind, and therefore never send to know for whom the bell tolls; it tolls for thee.  John Donne

We each have a flashlight he gave us for presents. I hope we shed a little light in his days too.  Man knows not his time.  May he rest in peace.

You can see  a glimpse of some of  the hands on doing and giving Steve was up to on Steve's blog.

Bad Photos of Beautiful Birds ...Can You Identify this Hawk?

As I sit at my desk the view directly out the window is of a little forest. 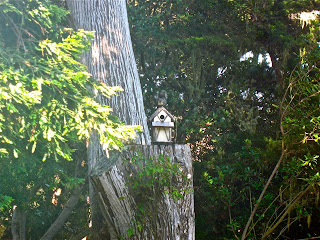 On top of a 7.5 foot tree stump we set a bird house that  Mark made for his mother a number of years back. 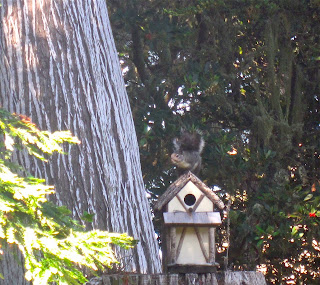 Thus far, no one has moved into the birdhouse in its new location,  but this squirrel frequently uses the gabled roof to voice his opinions and feelings.  It's his little "blogspot"  whether anyone pays any attention to him or not.  After  his pronouncements and ground inspections, he makes his return trip  up the standing tree,  scrambling and hugging his way straight up well over 100 feet.
I apologize for the terrible photographic quality...but I had to take these photos through the window or Mr. Squirrel would have abandoned his podium, and cut short his talk to avoid the risk he perceives me to be. There are real risks in his world...and one of them recently came visiting. 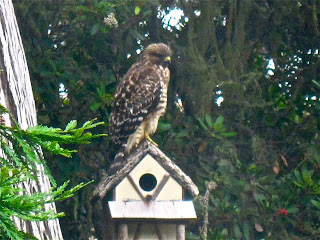 This visitor also found the bird house roof a fine place to perch and survey the garden.  Once again I had only moments  to capture a photo through the window...but I tried.  And since then I have been trying to learn more about hawks.

I am familiar with Red- tail hawks when they look like mature male Red-tails...but  identifying females and youngsters and at different seasons is not something in which I am well versed.  So if you know help me identify this bird.  It is about 18" tall and has yellow feet.  The pattern on the chest struck me as horizontal bars.  Unfortunately I didn't see the tail shape in flight but it appears longer to me than a Red-tail's. 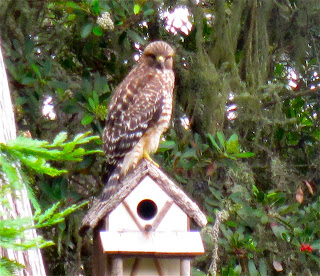 I posted these photos on Facebook and three friends,  all native Californians and lovers of birds themselves, gave me three different opinions.

One friend thinks it is a juvenile female Red-tail Hawk, another suggested Swainson's Hawk, while a third  said it is a Cooper's  Hawk.

The habits of Cooper's Hawks certainly fit this bird showing up above a bird bath in a treed area as they do prey upon smaller birds.  The large head, red eyes and longer tail also fit Cooper's Hawk descriptions.
But I am not sure...are You?

Oh, and as I titled this post "Bad Photos of Beautiful Birds... I better share a few more fuzzy shots.  My excuse this time is that I was early morning barefoot and such and had let out a cat when I noticed a flock of quail that I thought would rather be stalked by me than the kitty... so I ran out and took photos that aren't a lot blurrier than I was in the moment...and the birds are beautiful. 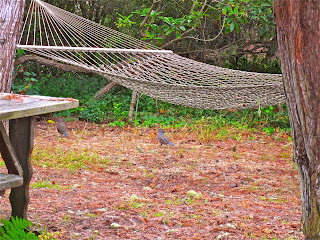 Quail  always seem to post a lookout...so as soon as the door opened  the flock was on the move. 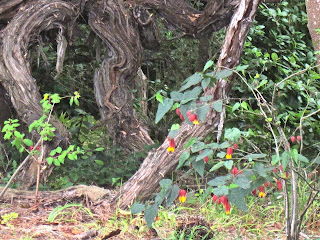 I was sure there was a quail or two in this picture...they do hide themselves quickly. 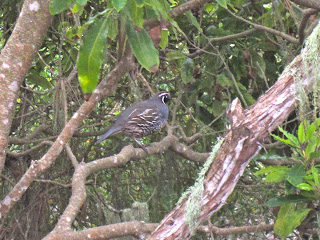 As promised...a bad photo of a beautiful bird.

Thanks for visiting...I'll come back soon if you will too....and while I enjoy all your comments, it will be really fun if someone can please help me identify the hawk.