Picture within a Picture : The Rose Outside My Window 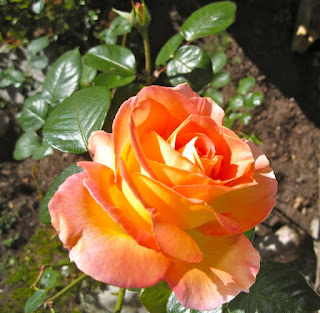 This rose opened on May 22nd right outside my window and unlike most of the buds, it opened turned towards the window...however because my window needs, shall we say, a little attention I went out the door and popped my picture outside. 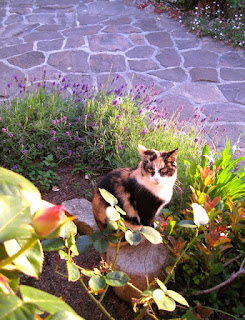 Tonight, two days later, the rose showed the first signs of fading and I realized how much I will miss it...right there peeking in my window, so I opened the adjacent window and in the rays of the setting sun took another little shot of it.  Yes, it smells wonderful too.  Opening the window attracted little Phoebe and she and I both admired a new  bud on its way... 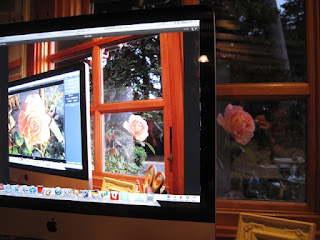 Looking at the pictures I had taken on my computer screen - yes my computer is also right at the window- I couldn't resist a picture within a picture and then once more again...  And I still haven't cleaned the windows....ah art...what you might lead to in the morning.

A Restful Ramble in the North Country

Guess we're like cows going home to the barn...we had a few days off work and choose to head up to Sonoma County.   While we weren't  able to see everyone we would have loved to see, we got to be with some of our special people. 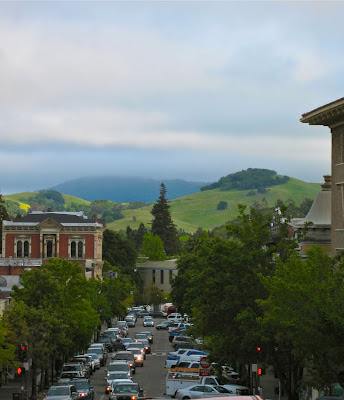 Golden shafts of light fought  their way through the clouds  and disappeared  only to sparkle momentarily on another knoll as we looked  south over downtown Kentucky Street, Petaluma, California. I have a sporadic but long history with Petaluma reaching back into the early 1970s.
I was glad to see the hills in green.  The sunshine months will soon repaint the hills in golden hues.
But being the first week of May, we found many green hills to admire...and beautiful creatures outstanding in their fields! 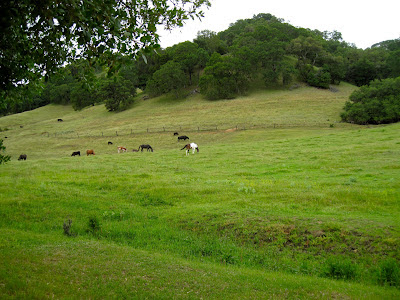 I am always willing to  make a new friend, but how magnetic could I be?  Could I possibly attract that little donkey way out in the field outside of Napa ...do you see him? 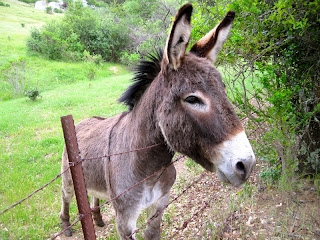 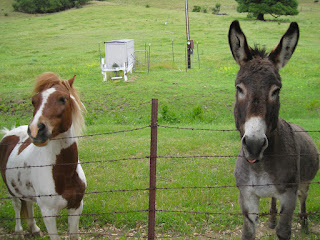 And when another little fellow tried to share in the friendship, look who had something to say about it. 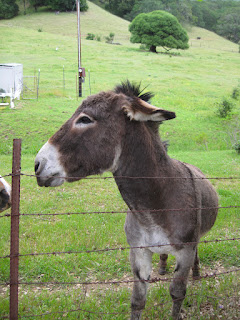 Just for the time...I was his girl and he wasn't wanting to share me...or the apple I  had planned to eat myself. 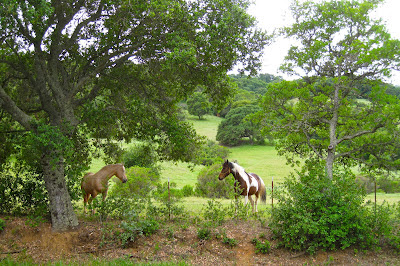 On the other side of the road two other beauties came to greet us but I dared not climb the slope for the poison oak bushes were thick between us. 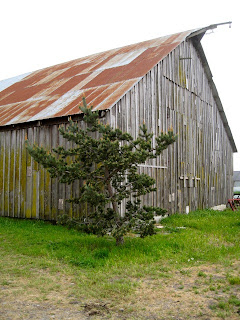 My theory about old barns has developed over the years...when you  see one, lose  no time in appreciating it.  You never know when it might tumble down in the night or be moved to make way, make way... 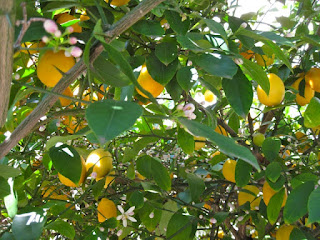 I plan to show this photo to the young lemon trees in our coastal garden..just to give them an idea of what they can become. 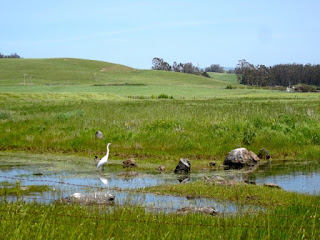 Two mallard  ducks and an egret are  lovely reminders to stop and slow the pace, but of course we soon kept going...wandering down favorite country roads.   Did you ever hear the old folk song  with the chorus :

"Green, green, it's green they say,
On the far side of the hill

Green, green, I'm goin' away
To where the grass is greener still." 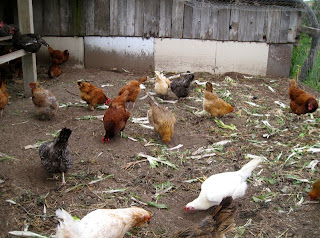 You can't go to Petaluma and not see some chickens... 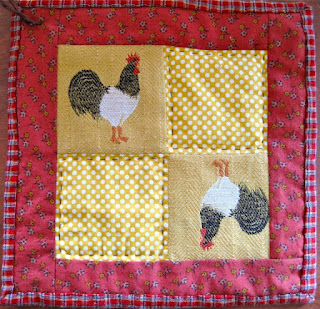 We've had flocks of chickens in the past, and maybe someday we will again, but in the meantime, when I got home, I have contented myself with making a new potholder. 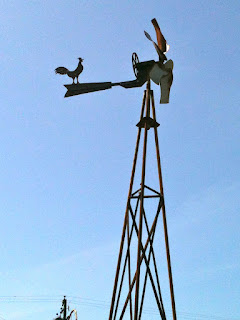 I thought about cropping out the top of the power pole in this photo...Mark took this one with his i-phone...but this relic isn't even on a farm anymore...it is in a  salvage yard waiting for a new home.

Everything just seems to fill my head with old songs this morning...after humming a few bars of Bob Dylans' "..you don't need a windmill to know which way the wind blows..."  I've moved on mixing up lyrics of two old songs...
"Silver threads among the gold"- "...make new friends, but keep the old..."  did I mention that we were celebrating our 35th wedding anniversary? 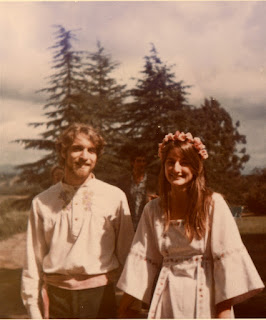 This is a fading polaroid, precious as it was taken by Mark's father and I found it in an old album of my father's.

And on that day too, golden shafts of light fought  their way through the clouds  and disappeared only to sparkle momentarily on other green hills and valleys...and eventually we had rainbows.

It was a restful ramble, our little trip.  I hope you've rested in the moment you've spent here with me.

On the last Saturday in April a friend showed up with wild boar, veggies and bread... 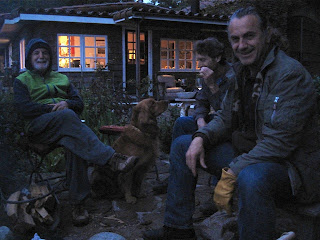 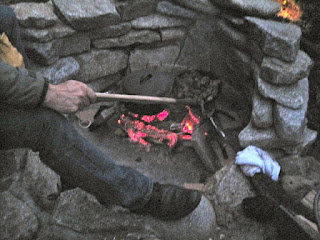 it's really great when someone wants to cook for you, isn't it? 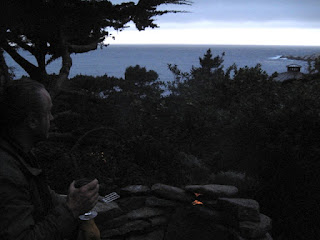 With  a jacket and the fire the evening was just warm enough to enjoy but we still decided to
eat inside... 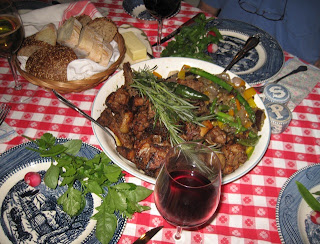