None of the three autobiographical books I've read of late are hot off the press, but they were all new to me. And oddly, these three very different lives have a lot in common. 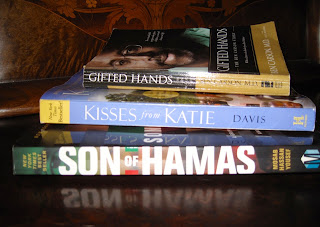 Late summer a friend gave me a copy of the 2011 New York Times Bestseller, Kisses from Katie.  I confess that I took it home and set it on a shelf.  It didn't look like "my kind of book."  I found the title to be cloying.  However, I trust my friend and wanted to be able to respond when asked if I had read the book, so I carried it on a road trip to Idaho and brought it home again, no more familiar with the story of the young woman on the cover than I was before my journey. 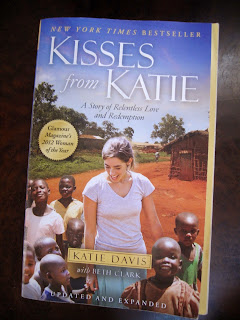 Once I finally began reading, I found a rather amazing tale of a girl who, based on a three week mission trip to Uganda during her senior year in high school, asked her parents for permission to postpone college for a year so she could return to Uganda and teach little children there.  Katie Davis was born in 1989 making her now twenty-five years old  in 2014.   That is especially important for her because Ugandan laws require residents to be twenty-five years old to adopt children and she has been the foster parent to thirteen little girls!  ***Yes, I know that exclamation points are best used sparingly.  I think I have have restrained myself greatly using only one; considering the  information contained in my last sentence, perhaps there should have been  thirteen of them.*** 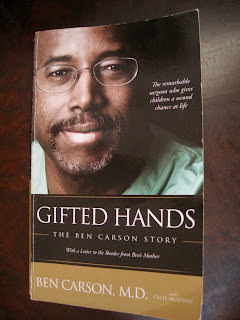 Next the 1990 Ben Carson story  Gifted Hands  fell into mine.  While Katie Davis is a daughter of privilege, her school's homecoming queen and class valedictorian,
Dr. Carson, born in 1951, was one of two sons of a working mother in inner-city Detroit.  The book opens with a letter to the reader from Sonya Carson who writes:


Dear Reader, As the mother of Ben and his brother, Curtis, I had a lot of challenges.  Being one of twenty-four children, married at age thirteen, and later having to get a divorce after finding out my husband was a bigamist were just a few of them....


Ben Carson begins his story sharing his childhood  struggles with a convincing vulnerability.  I had read on the back jacket that he became  director of pediatric neurosurgery at John Hopkins Medical Institutions at age thirty-three, but I found little hint of that possibility as I read the chapters about his young life. I also had no idea how much brain surgery explanation I was getting myself into, but once I began this book there was no way I going to skip over any of it. In addition to his passion as a surgeon, Dr. Carson offers himself as a motivational speaker for young people.  He believes that "With the right help and the right incentive, many disadvantaged kids could achieve outstanding results."   He certainly has. 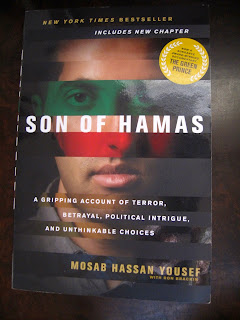 Son of Hamas...This incredible chronicle was published in 2010.  Mosab Hassan Yousef was born in the West Bank city of Ramallah "to one of the most religious Islamic families of the Middle East."  It was the same year I was giving birth to my first child in California so I have a very real sense of how long he has been on the planet; he is now thirty-seven years old, but he has lived in an utterly different world than the one I know. He is currently living under political asylum somewhere in America.   He didn't set out to write a New York Times bestseller, but he has.  He didn't set out to do many of the things he has done.

I am recommending these books to you.  I am  reticent to tell you much about their journeys as they are so personal and I want to neither add nor take away from the narrative of these brave souls.  Each one of them hopes to make the world a safer and better realm for others and to tell their respective stories they have to trust the reader to look beyond cultural or emotive differences.  These three lives with not a word written of them already represent tremendous  giving and impact in the world. Sharing one's story is an additional gift, a tremendous vulnerability and I am glad to have been a recipient.


I 'll be interested if you have read any of these books.

If you haven't read Mr. Yousef's book, start there, it's truly a challenging and powerful story and ever so pertinent to trouble stalking our globe.  I am already thinking of rereading it.


By the way, each of these books had an acknowledged co-writer:
Katie Davis with Beth Clark
Ben Carson with Cecil Murphy
Mosab Hassan Yousef with Ron Bracken