Friend or Foe and How Do You Know?

A simple spice has reminded me that calling things by their proper names according to their actual properties is important and helpful.  It reminded me of the value of looking into subjects more deeply and unearthing distinctions that might otherwise be blurred.  It made me think about how substances can be related but different, or how even the same substances or actions  can be used to different effects.  I thought about how some consequences are unintended, but there they are anyway and  how much choices can  matter,  and how and why things happen and what can be learned from mistakes.  But for now I'll  just tell you about my botanical investigation and leave you to your own applications in other domains.

There's a Middle Eastern spice combination  that a local restaurant floats in olive oil as a bread dip.  Za'atar is a combination of ingredients mostly very familiar to me, salt, thyme, sesame seeds and oregano,  and one that surprised me, sumac.

Sumac in my mind always has the word poison in front of it; poison sumac, poison ivy and poison oak  are all bushes whose oils can cause  welts of pain and itching to the skin of many people. Unfortunately, as a native  Californian, I have been intimately familiar with poison oak, but I learned quickly as child, how to spot my enemy in all its seasonal guises.

Although  I've read that some Native Americans of California nibbled at young poison oak shoots and I know that currently there are homeopathic preparations of titrated poison oak to teach the body to  defend itself against the plant irritants, I wasn't so sure that I wanted to eat sumac on my bread. But then I reminded myself that  I didn't really know for a fact what exactly it was I was eating. 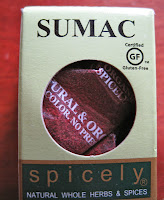 I found a small commercially  packaged box of sumac at a store  but the supplier did not identify the substance beyond its common name. The ingredients simply read "ground sumac berries." At least I had learned what part of sumac I'd been eating,  but of what kind of sumac ?  The trees and plants I know by name I know mostly by their common names.  In most realms in life, I often  know just enough to know  that if I would pay a little closer attention, I might actually know just enough to keep myself out of trouble.   I realized I needed the botanical scientific descriptors to find out anymore about  "Sumac."  Latin isn't really,  as some like to say, a dead language, it's just that for the most part it's no longer spoken and therefore doesn't tend to change.  Speakers of all languages the world over can refer to species with the same name by using the Latin botanical descriptors.

I found help in my  Guide to Field Identification of TREES of North America that I keep handy  in the door pocket of my car.   SUMAC is quite a big family and as I read about the clan I was in for a few surprises.  My tree book reminded me that members of a family  are then grouped into Genus and then further grouped into species.  So Family, Genus ( always capitalized) and then species ( lower case). 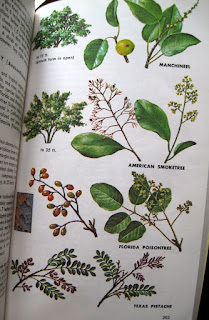 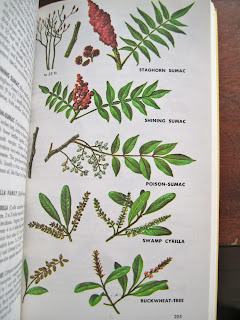 So while  poison sumac is indeed in the same family  as  the sumac used as a spice, it is in a different Genus.  The scientific botanical name of the poison oak that  had caused me so much itching after childhood jaunts in the hills is  Toxicodendron diversilobum, although it used to be referred to as  Rhus toxicodendron.   Poison-sumac is Toxicodendron vernix  and the sumacs that are used  to spice food are Rhus coriaria.

So they are different, but they are related...and I did find some minor cautions and lots of other possible health benefits  when I searched on the internet using the botanical name, Rhus coriaria.   I also learned its common name, Sicillian sumac.

Parables of poison plants and spices tease my mind as I think about local, national and global stages...but I'll keep my promise and let you apply any analogies you might think of,  and as always,  let me know what you think if you like.
best wishes!
Jeannette
Posted by Jeannette at 7:15 PM 4 comments:

Labels: Bread for Thought, Health and Well Being, Nutrition, Slightly Political, The Garden

A moment of silence in the noisy world 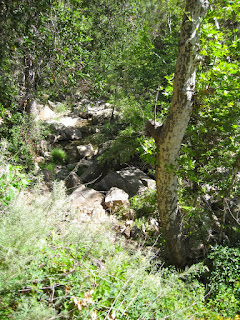 ~~~
Along the stream
where no one lives
the silence speaks
in voice of birds,
the rocks command
the water's song,
the quiet sings here
all day long.

The winds talk in
the tallest trees,
and leaves give answer
to the breeze
along the stream
where no one lives .
~~~
May 1, 2013