The Free Milk of Human Kindness ...from Silicon Valley to Rwanda

Friendship is certainly boosted by proximity, but over my lifetime there have been a number of people who I have been destined to respect and love and yet not get to have anywhere near my neighborhood.  Such are my friends Roger and Faith Shaw.

When we lived in Carmel on the cliffside estate, our employer had us host a fundraiser for visiting Rwandan cyclists who spoke every manner of smile but very little English.   Faith, who at that time lived in San Jose, was hired to translate their Kinyarwanda so the guys could tell their stories to the  invited guests.

Faith and I had one of those instant bonds; we found that we spoke the same language indeed.  Over the next few years my husband and I had some very dear encounters with Faith and her husband, Roger. For a time we lived close enough to visit each others homes.

While time and distance came between us, for Roger and Faith left California and moved to Rwanda, my appreciation of who my friends are and what they are doing continues to grow.

I hope you will watch an unsophisticated but fascinating video of Roger, learning about his larger neighborhood and showing why he wants to give milk to Mwendo neighbor children, but before you do, from their web page  in Rwanda, here is a bit of Faith's background:


First and foremost, she herself was a refugee separated from her parents after fleeing Rwanda's first genocide. She was taken in by another family, but was shamelessly exploited. They told her that her parents were dead, that there was no hope and they forced her into servitude.
A year later, Mrs. Hindley, an English missionary rescued Faith and hid her under blankets in the footwell of a vehicle and drove her to freedom. Mrs. Hindley re-united Faith with her parents. Later, growing up as a refugee in Uganda with very little money in the family, an unknown sponsor paid her school fees.
Faith eventually attended Makere University. One evening, outside her college dorm, she discovered an abandoned baby crying in the trash. She took him to hospital and made plans to adopt him. Unfortunately, despite Faith's efforts, the little boy died a few days later.
Sometime after graduating, Amin's soldiers arrested Faith on trumped-up charges and held her in a cell where she was certain to be raped that very evening. However, a man who described himself as a friend of her father's saw her in jail and somehow negotiated her immediate release. Neither Faith nor her father ever identified the man.
Faith left Uganda and moved to Kenya and took a job as a teacher. Later she won a scholarship for post-graduate education for refugees. She moved to England to become a student again. It was here that she met and married her husband, Roger. They had two daughters, Zoe & Murika, and later the family relocated to the USA. In 1994, they watched Rwanda's second genocide unfold on the TV news. It was a horrifying event resulting in the murder of 800,000 people. The aftermath was heart breaking. Among many awful tragedies, thousands of children were left without anyone to care for them. This painful reality weighed heavily on the hearts of Faith & Roger and they recalled how someone had helped Faith when she had been a child in need. They couldn't quite reconcile their comfortable family life in California with the suffering of so many abandoned children in Rwanda.

In 2000 Faith visited her homeland and saw children in need in the aftermath of war.
In 2003,  Roger and Faith bought a four bedroom house in Ruhengeri.


They hired a nanny - Judith, and a cook - Gatzinzi, and they accepted the first four orphans, Ruzindana, Anne, Mutoni & Alice. Faith's dad did a great job of running the home and being a role model for the children and staff to look up to. Sadly for all of us, he passed away in 2006.

In 2006 they incorporated and children kept coming...if the cook
didn't find another orphan, one of the children did.  Faith sold her paintings and jewelry she made to support the children and her church helped too. She would fly back and forth from their home in San Jose, California where Roger was still working in Silicon Valley... but it wasn't the vision they had.  They wanted the children to  live as a  family and they decided together to give up their work and home in California to become  Mom and Dad to an ever growing family in Rwanda. 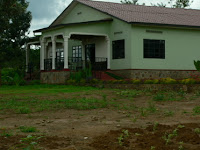 In 2012 they relocated the rescue home to Bugesera. The website has wonderful pictures of the home they built there and the children who are growing up. It isn't accurate to call the Ishimwe rescue home an orphanage, for the children who live there are sons and daughters.  Faith and Roger have eighteen children! 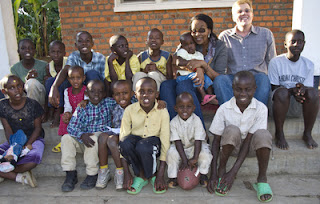 In the years since,  Roger has built a fish farm, a whole other story in itself, to help the area be more self sustaining.   Faith started Pioneer School, a place where the Ishimwe children can learn amongst other children of the community, broadening their sense of belonging and purpose.  The Ishimwe children learn at home to grow their food, and raise animals. At school they study reading, writing, arithmetic, computers, music and art and they are learning how knowledge, work and cooperation can call forth abundance enough to share.

Which brings us again to  Roger's latest hope and his video.  The children at Pioneer School all get a big fresh glass of milk each day from the cows at the Ishimwe home.  Roger wants to bring free milk to the neighboring school and several homes where the children are not able to attend school.

After watching Roger's video, I  remembered an advertising slogan from an American bread company of the 1950's, "build strong bodies twelve ways."  We can laugh now at white Wonder Bread with its 12 added nutrients, but Roger's milk will build strong bodies and it is also likely to kindle love and good purpose in the grateful recipients. 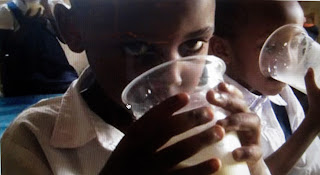 And to think of the promise that is attached to giving even a cup of cold water to a little one.


hoping the best for you,

Jeannette
ABOUT DONATIONS!
Some people have asked if they can donate...yes, that would be lovely!
If you click on the video link that is in the story and I will provide it again HERE you will see to the right of the video picture is a donate button through an organization that Roger chose called Generosity.   They do not charge a fee to either side, but they do make a space to give Generosity a donation as well, if you so choose.  This site requires a credit card.

I gave my donation via PAYPAL to the Ishimwe website  with a note to specify that this particular donation was for MILK MONEY  for ROGER,  You simply click on the button to make a single donation and the option for PAYPAL will come directly up as well as other choices.