Here's how it started. We were just taking a walk. Mark had his guitar in the car so he brought it along. I had my camera and asked him to pose at the anchor for me. 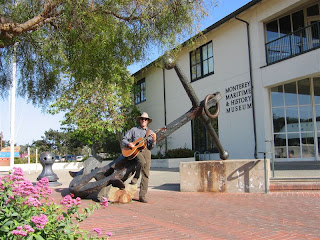 Fred was sitting in the sun nearby and told Mark he needed to smile for his picture. Mark turned his lovely smile on Fred and that got Fred on his feet. We welcomed him. An amiable man of 98 years, we enjoyed what Fred shared about his life. He tells a good story and cares deeply about his family. I asked if his family has ever asked him to write any of his memories and he says one of his sons plans on writing a book. 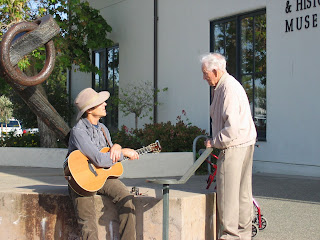 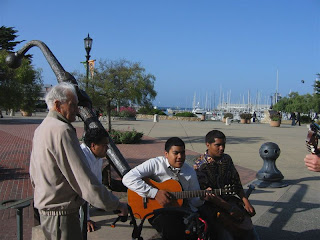 Mark was playing for Fred and then all of sudden three more men ran up. One minute they were at the fountain, and then zoom we were surrounded with smiles. The three are cousins, Joe a married man who lives in town and John and Leo who are students from the bay area. They had two guitars with them and pretty soon we were treated to some guitar and singing from their native Tonga. And then the jamming began. 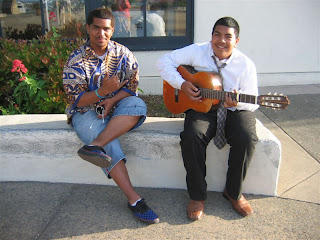 When these guys are famous, just give them a little time, I will remember when they were members of the impromptu band on a Sunday in May.
Here are The Anchorboys. 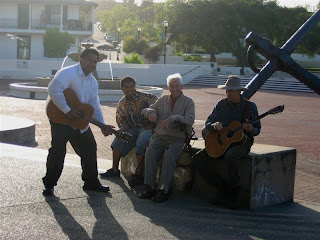 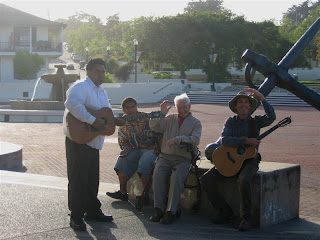 A fine time was had by all and we might still be out there if the sun hadn't lowered in the sky.

That's how it happened.

And Fred wants copies of the pictures.

What a gift! Praise God. This story will remind me to continue keeping my camera in my purse.