In Burma it is Sweet December 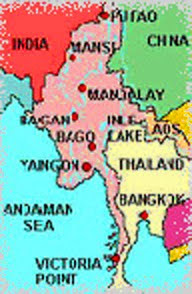 I have friends who are native to Burma and they wish each other "Sweet December." The Karen people celebrate on the last night of November to mark the beginning of Christmas, which they celebrate throughout the month of December. It is also a celebration of harvest and family...generally a time of sharing. The Karens, pronounced (Ka-rans), are an indigenous people to the southeast Asian countries of Thailand and Burma. The population numbers around 14 million in that region with the majority of the Karens living inside Burma. Traditionally, most Karens are farmers . Today I read a little about the Chin people who also might wish you a "Sweet December." Many of them live in the Mandalay area.

In a little benefit shop in the California town near where I live, I found a zip lock bag marked $3.00 that contained a Nativity Scene. It is from Italy, plastic and childlike and so I bought it to set out in the garden. I placed it in a little nook in the wall in front of a two foot tall door where many years ago the milk man would deliver bottles of fresh milk. 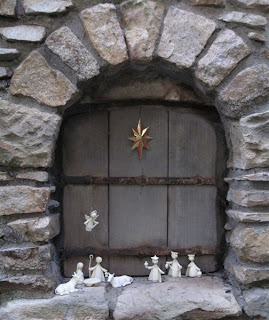 If you hunt around on the web you can find news of Burma, but most of it doesn't make the front page even though it should. Not all the world is free. Burma has once again been listed as a Country of Particular Concern in the latest edition of the US State Department’s Annual International Religious Freedom Report. Burma, as Myanmar, has no democracy, and human rights and the rule of law are not guaranteed to her people.

The people of the deltas who survived cyclone Nargis of May 2008 are still in need of help and the government thwarts those who try. Recently, authorities in Rangoon’s Dagon Seikkan Township have arrested several members of a volunteer group helping victims of Cyclone Nargis. It's hard to even transfer money to people in Burma when you want to help. American dollars cannot be received directly...

When you hear of a benefit for the people of Burma, and viable organizations seeking to help perhaps you'll decide to pay some attention and see if there is something you can do.

Last August a handful of my friends responded to an appeal I made to help a village rebuild and have a boat again...the only way they can get needed supplies is with a boat. 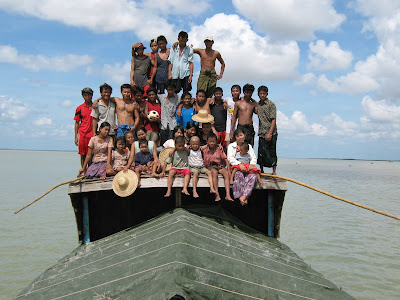 I was so touched by my friends' generosity. Everyone loved getting this picture. I won't use any village names or the names of my contacts or how the money gets exchanged because I want them to be safe. Isn't that amazing, getting food or money to people in need, orphaned children, could get those in Burma who help in trouble? Not everyone who calls Burma home can stay there..."Refugee camps along the Thai-Burma border could come under pressure from rising rice prices and a possible influx of new refugees from Burma in the year ahead. The Democratic Voice of Burma quotes Jack Dunford, head of the Thailand Burma Border Consortium (TBBC), which manages the nine camps as saying there were several variables they had no control over; exchange rates, the price of rice and the number of refugees. " Thanks to Shane Abrahams for that link. I just discovered his site today. It has links to many news sources and his banner shares an old Chinese proverb that represents the kind of informative peaceful efforts he is making for the sake of so many who are near voiceless:
“Don’t curse the darkness – light a candle.”

So I've lit this little candle on my blog by touching my candle wick to the flame he has going . 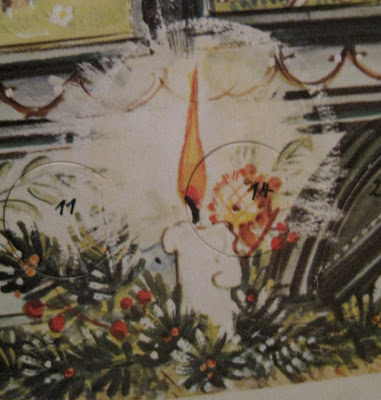 And when you light your advent candles, or drive freely to and fro in your day's tasks, maybe you will think of the people who would gladly wish you a Sweet December.
~~~

Posted by Jeannette at 4:31 PM

Oh, thank you for loving these people and letting your (His) light shine! It's an example of a little light, or a collection of small deeds that God uses to impact people through many generations. Glory to His name forever.

Your blog keeps getting better and better! Your older articles are not as good as newer ones you have a lot more creativity and originality now keep it up!

Happy Sweet December from our (refugee) Chin girls and our USA family!