It's April...Projects Spring Forth and the Blooming Continues 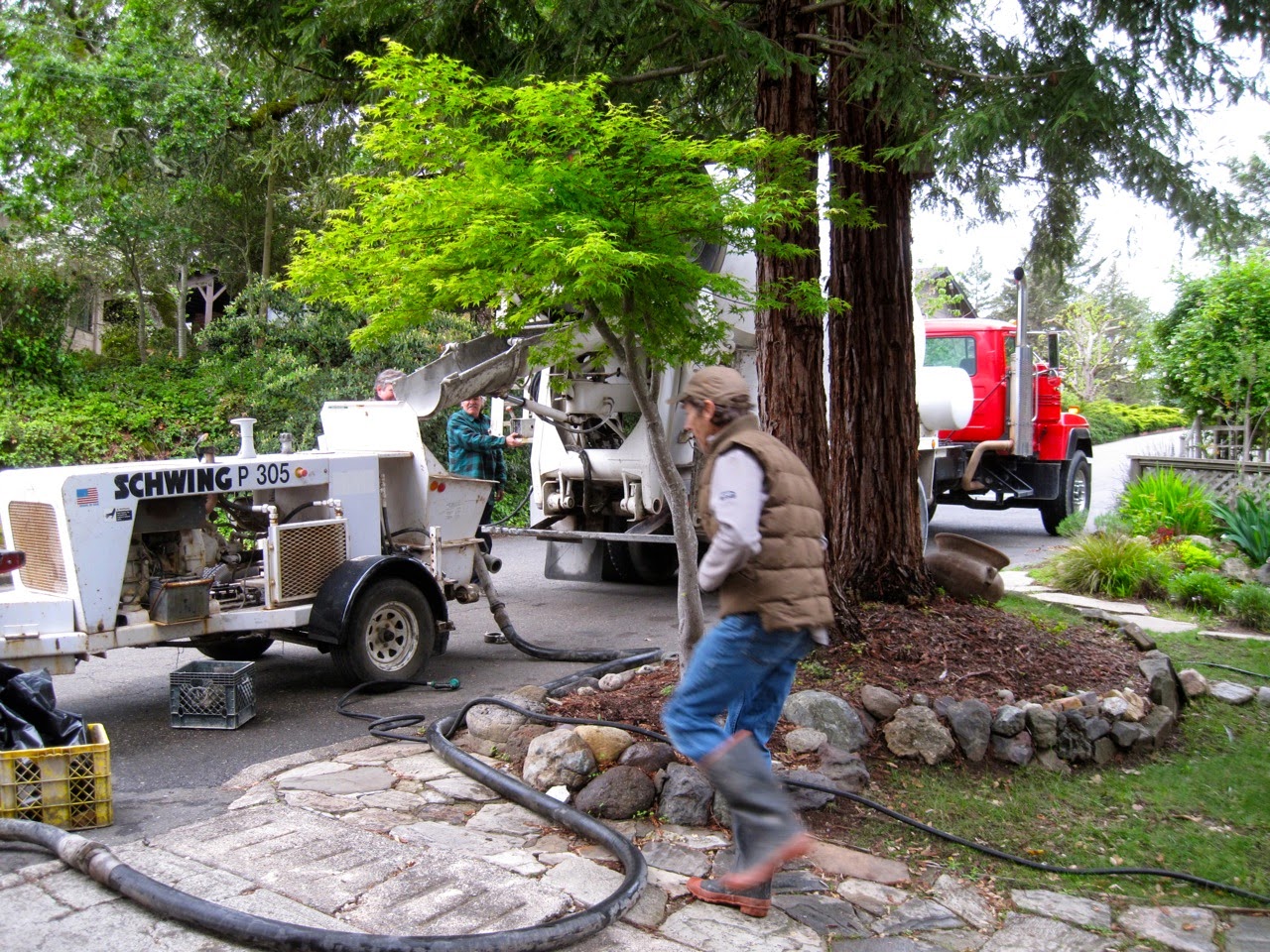 When a concrete mixer and a pumper truck show up an hour early it gets your attention. Fortunately, Mark knows to be ready sooner than you think you'll need to be and so he was prepared for them.


And that has been an underlying theme for me of late, "being ready."  The various transitions in my life present an opportunity, the freedom of making new choices.  While it  would be easy, on some levels, to reconstitute the work and other situations I had in place before the seven year work jaunt we did in a different locale and while there is the risk of stalling and stagnation, I want to be careful what I engender.

I find the garden, down on my knees or when it is a bit too wet, on my haunches, a good place to ponder.

When the trucks and men showed up, I retreated to the back of the garden under the sprays of Bridal Wreath Spirea. 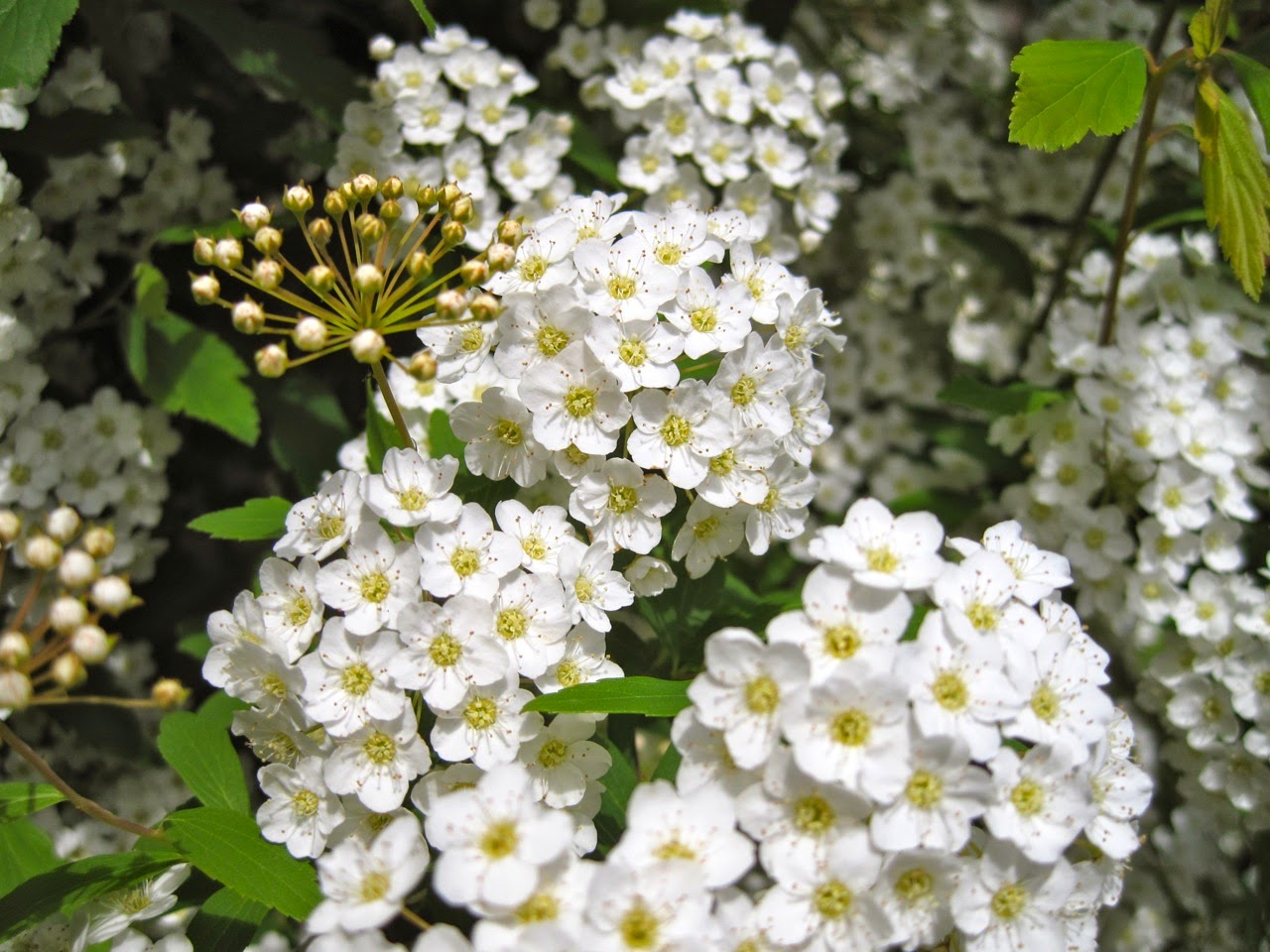 These bushes remind me, I was perhaps 6 years old, of an unsupervised  learning by doing experience I had.  My family's home had a long hedge of Bridal Wreath along the driveway. These bushes can send out rather unruly shoots and  I thought  I could shape them up a bit.  I  began cutting and trimming and stepping back to view my work the way I had seen others do, but  every cut I made created a new problem. I didn't understand the structure of the bush and didn't anticipate what would be revealed as I cut away. By the time I was discovered devotedly trying to fix my mistakes, one of bushes in the middle of the row  was "pruned" just about down to the nubs.

Poor shrub, it was a  long time in coming back to the size and majesty of its  neighbors.  My father made some incremental adjustments to the blooms on either side to blend in my handiwork as much as possible.

While  I have learned quite a bit since then, about plants and pruning, they still seem to be always teaching me about love and life. There is much to learn in the garden...  analogies, metaphors, cautions and encouragements...they all seem so  available and I need them for every other realm of life. 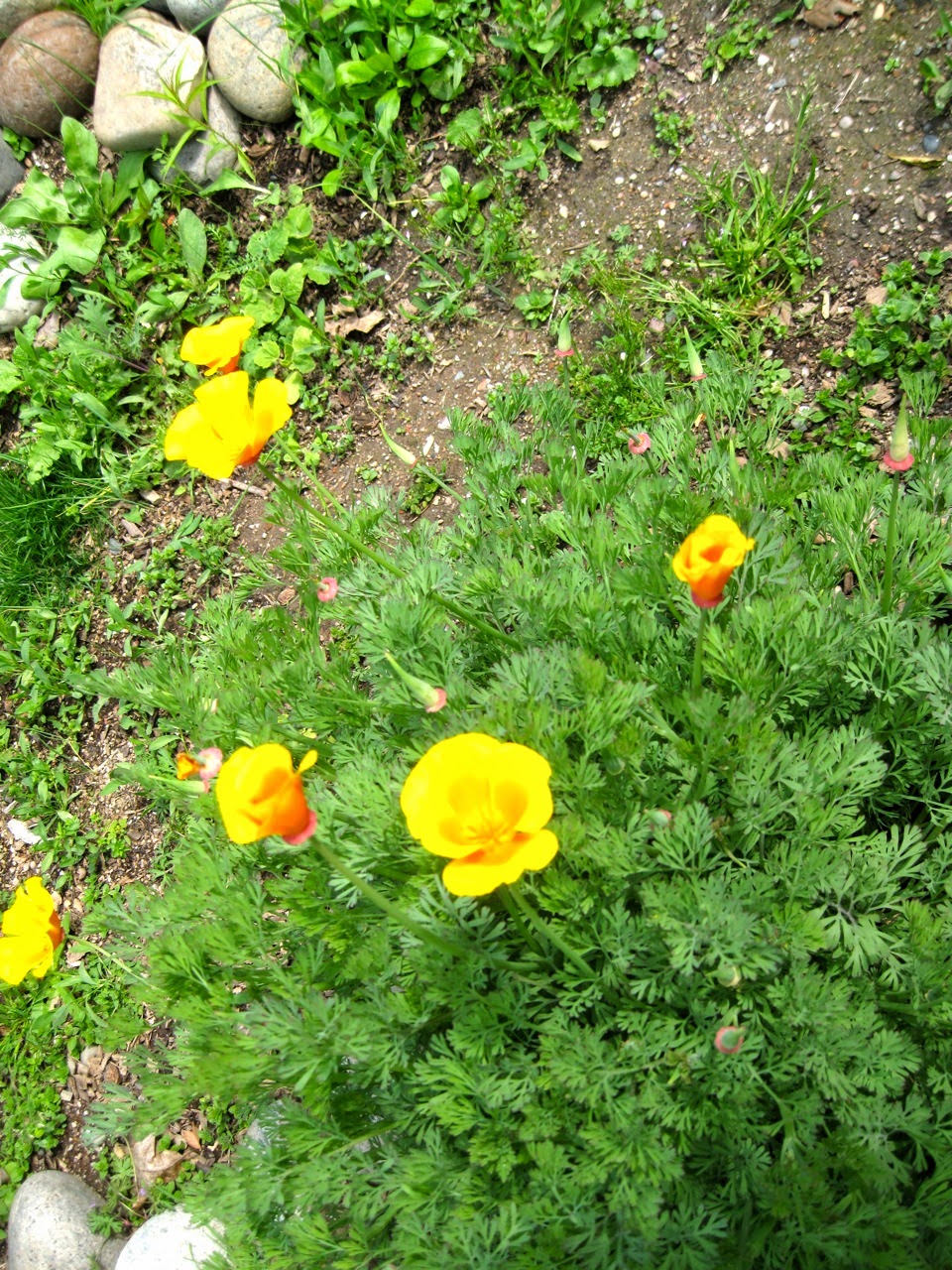 I let the poppies decide where and how to grow as well.  If they pop up in the middle of a path or snuggle around the kale, I just can't get myself to pull them.  It is against the law to pick the state flower out in the wild, so why not in my garden? 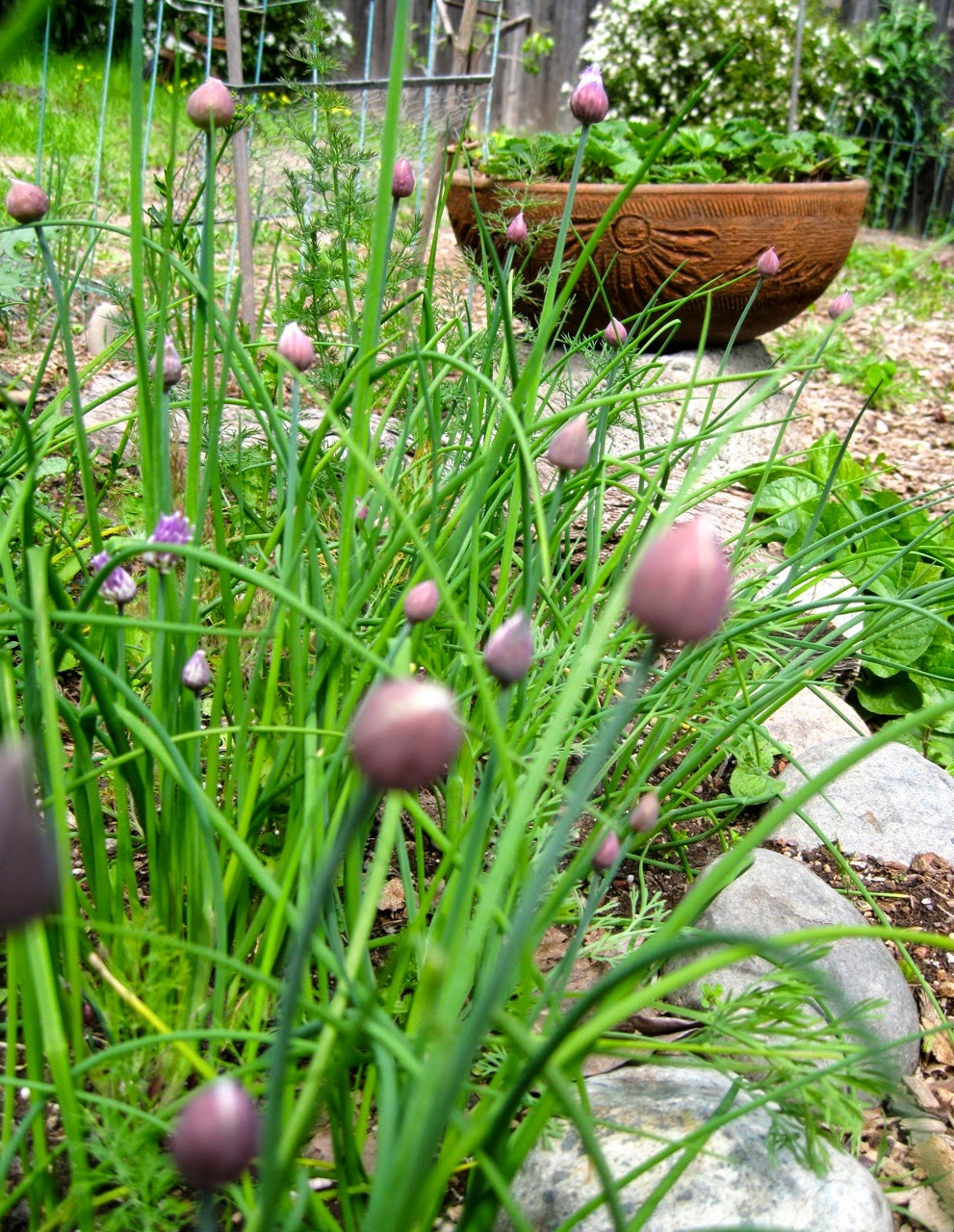 These blooming onions have some young poppies to tangle with and they should get along fine.  I don't want to disturb either one of them until it's time to thin or harvest. 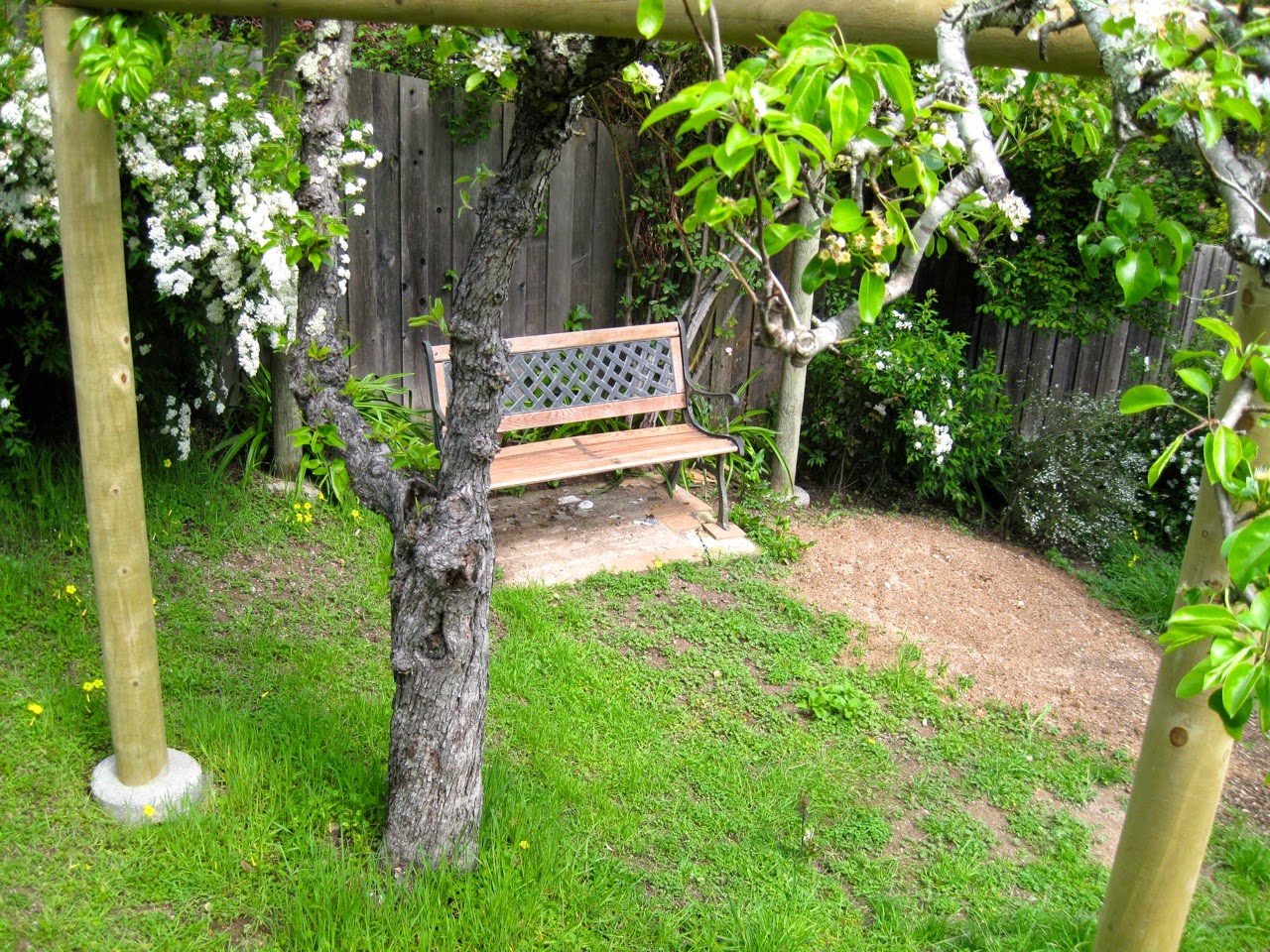 It's hard to sit for more than a minute this time of year...the weeds are lush and launching seeds and the cycles of sun and rain are what every little green plant has been waiting for. My intention is often to get the garden pulled together, after all I do need to get on to other things, but the weeds are laughing at me and asking, "Who are you trying to kid?" 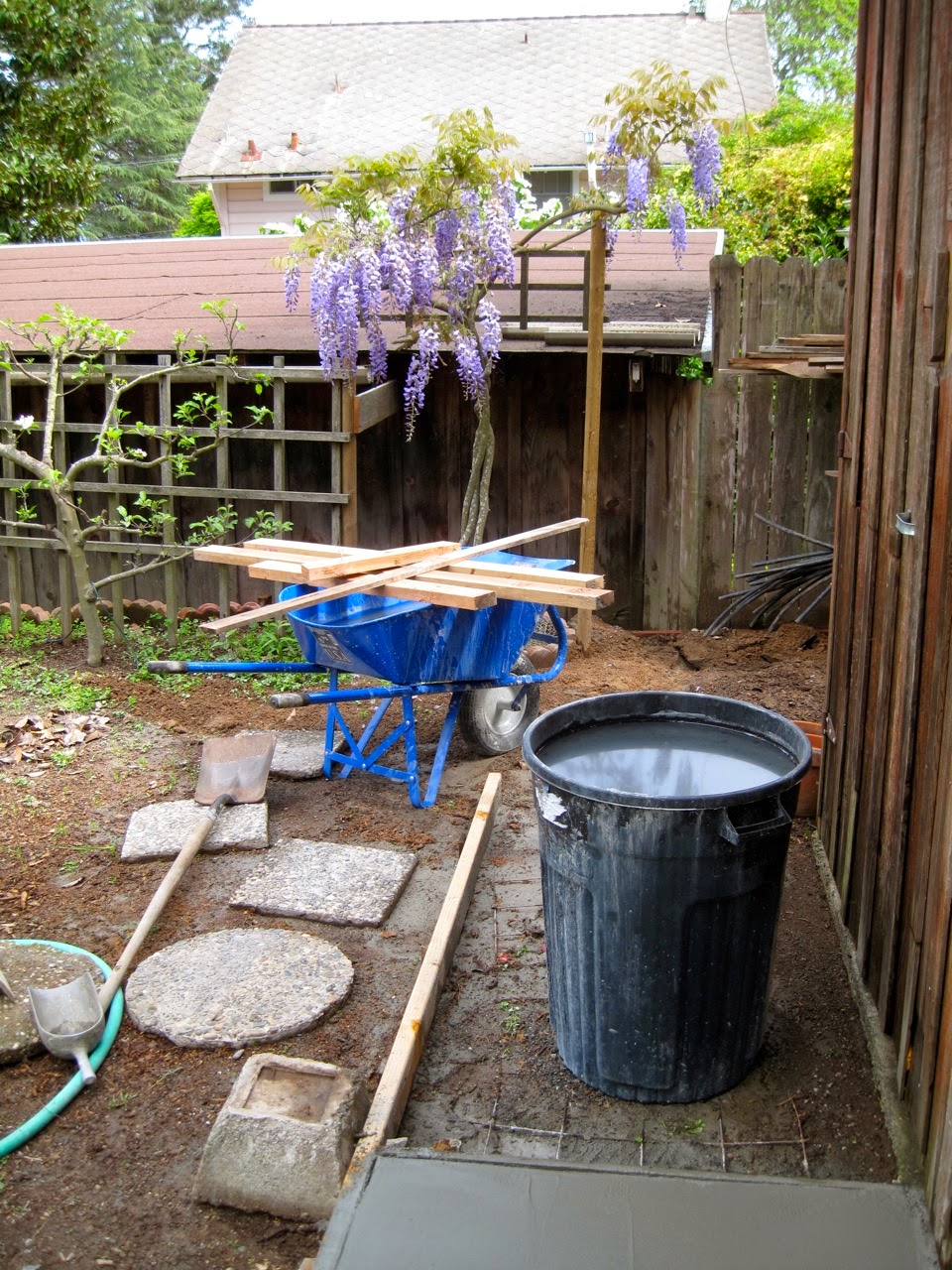 The concrete truck can't keep any of the load...so Mark made a skirt for the back side of a shed to use  any "extra."  You don't want extra but it is often inevitable because you really don't want to run short on your project.  His calculations of the slab he needed were pretty close and so our prepared "extra" place didn't receive anymore than 2 hops of a hop scotch. Now we wish there had been a little more extra. But it's a  project for another day, an old fashioned project. No big pumper truck will come, he'll mix up the bags in the wheelbarrow and shovel it out.

As I was saying, I'm trying to pick up on these lessons to pay attention, be ready in advance and be careful of what I engender.  I see that one project does seem to beget another.

Posted by Jeannette at 1:19 PM

I always enjoy your postings, Jeannette!

Your yard is a paradise! Love the story of your 6 year old self. I know some folks much older than that who do the very same thing. :)

Oh I LOVE looking at your blooms! Thank you for sharing!

Thank you for sharing. Always a treat to read your musings...