Can't REST all week WORK if you CAN. 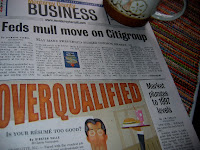 There are so many songs about the working man blues...
but for a lot of folks they just don't cut it right now.
n/n Lots of People Singin the Not working at all Blues n/n
~Women definitely not excluded in this plight~
Remember the old folk song: "Where did all the flowers go, long time passing?"
Now it's " Where did the money go?"
Some of it had to have been actual, so where's that part?
There is a saying in systems theory that the whole is greater than the sum of its parts.
But you have to have all the parts and them working for things to work.

To quote Bob Dylan...which may describe the ECONOMY'S WOES as well as any Economist:
"The pump don't work 'cause the vandals took the handle."
Here's to everyone wanting and willing and needing to work,
Hope your assets and abilities and efforts are all adding up to keep you well.
./.
Posted by Jeannette at 9:05 AM

from Dylan's Workin' Man Blues #2:
There's an evenin' haze settlin' over the town
Starlight by the edge of the creek
The buyin' power of the proletariat's gone down
Money's gettin' shallow and weak
The place I love best is a sweet memory
It's a new path that we trod
They say low wages are a reality
If we want to compete abroad...
Meet me at the bottom, don't lag behind
Bring me my boots and shoes
You can hang back or fight your best on the front line
Sing a little bit of these workingman's blues.

Pete Seeger wrote "Where have all the flowers gone?" In that system, young girls picked 'em, gave 'em to their husbands, who went off to soldier and came back to fill the graveyards. The graveyards yielded plenty of new flowers. So maybe the (real) dollars that are gone will be like bread cast on the water, it will return after many days. I have to trust that the whole will indeed be greater than the sum of the parts. But we're gonna need to come up with a new handle for the pump. So even when there's no job, there's always work.