Conflicts in Nature Wildcats on the Coast

This is Phoebe's story...I was making jokes last week about having a kitty cam on our cats to see where they go.
I wish I did. 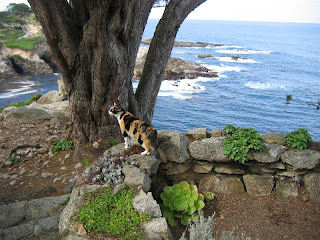 On Sunday I noticed fairly large wildcat scat on the southern path.
Tuesday night about 10 pm we were in the cottage with two friends. Phoebe,our cat, had been walking around with us at sunset and was currently right outside the front door underneath a chaise lounge.


Kitty Bumpkins, who also lives with us had been out and about since early afternoon and we were still waiting for her to show up for the night. 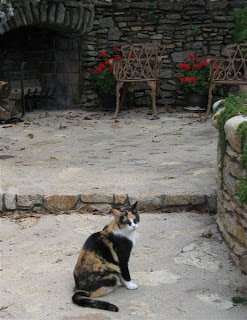 While sitting with our visitors, we heard a strange noise, a scraping, tumbling noise and we all jumped up.

Mark threw open the door and we saw a fleeting glimpse of flying calico and something larger chasing.
Then in the dark we hear a most horrible cry.
Our friends had been about to leave but F. helped us search for a little while and D. stayed with Gideon the dog who we weren't sure we should let out, though later we did to see if he could help us track the cats. Two visitors from the main house joined us briefly. We had headlamps and flashlights and sticks. Mark and I continued to search every bit of the 3.5 acres we could reach. Mark scoured the ravine and even went into the neighboring property. 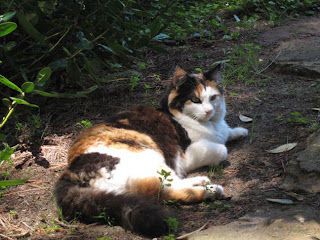 This is Kitty Bumpkins
At around midnight, back near the cottage, I saw Bumpkins. After some serious coaching, I got her inside.  One cat was now safe.
I sat out front of the house for a while calling and watching for Phoebe, my guts wrenching in distress. Mark and I called each other on our cell phones, each trying to cover different terrain. Now Mark was getting tired; well we had been tired when it all started. We didn't know what else to do; there was no sign of Phoebe or her attacker. We lay ourselves down in bed, but every 10 minutes or so I was up again, at the window, or outside, listening. What were the chances she could out run a bobcat?  Where could she go that the wildcat couldn't? I slept a little and woke to a noise. I searched around but found nothing. I lay down again and then some time after 3 in the morning I got up to use the bathroom. Without much hope I went to the front room and there, hunched on the top of a padded chair outside the front door, I saw through the window the curve of her little back. I was amazed and so relieved.
She was moving slowly and just wanted to get in her bed up on my desk where she generally spends the whole night. When I woke in the morning both the cats had gotten on our bed. Phoebe was curled right up against the small of my back, and though the two kitties have been been uniquely possessive and territorial about us, Bumpkins was sleeping peacefully only a few inches from Phoebe. 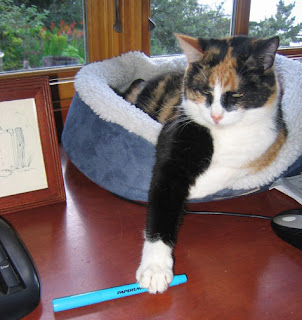 This morning we took Phoebe to the vet. She has no puncture wounds, or broken bones. She is limping, bruised and tore some claws. She has a fever and is on anti-biotic.
We'd like to figure out how to catch the bobcat and move it to the wilder wilds. There is a wedding here Saturday...maybe all the people on the place will discourage it from hiding and haunting here.
Grateful and relieved and too tired to realize how happy I am,
Jeannette

Posted by Jeannette at 2:16 PM

Glad that your kitty is home sweet home and healing. Hope you get some rest - are you hosting the wedding?